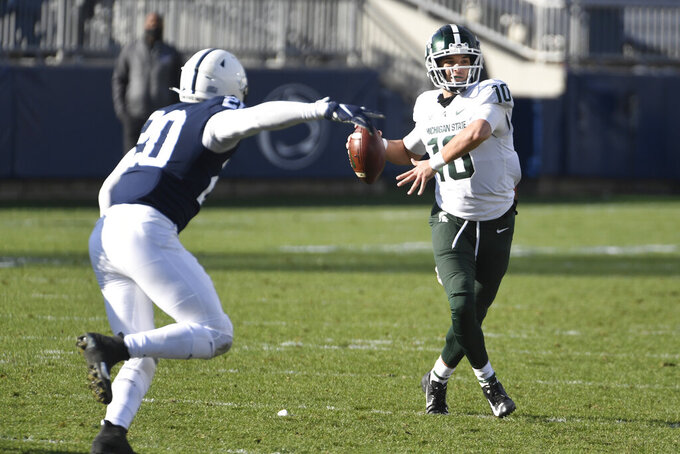 In yet another twist to this crazy college football season, a matchup between Maryland and Michigan State has been canceled a second time after an outbreak of COVID-19 in College Park.

The Terrapins (2-3) were slated to face the Spartans (2-5) on Saturday night as part of the Big Ten “Champions Week.”

But on Thursday afternoon, Maryland released this statement:

“Under the guidance and advice from university medical staff, Maryland Athletics has canceled Saturday’s scheduled football game against Michigan State. The game will not be rescheduled. All team training activities have been paused.”

So, once again, a game the Terps and Spartans was called off just two days before it was to be played.

The original plan by the Big Ten was to match teams from opposite divisions in this additional week, but since the Terrapins and Spartans had their Nov. 21 game wiped off the schedule, they were going to try again Saturday night.

“This has been a season of promise and of adversity,” Maryland coach Michael Locksley said. “Our team has demonstrated a tremendous work ethic, resolve and displayed Maryland pride throughout this unique season. We have battled two opponents each week, the team we matched up with on the field and COVID. Together, we experienced tremendous highs and we are deeply disappointed that we will not be able to test ourselves on the field against Michigan State.”

Maryland ended up playing five games this season and having four canceled. Home games against Ohio State and two against Michigan State was called off because of a COVID-19 outbreak in College Park, and the Dec. 5 game at Michigan was canceled because of virus issue among the Wolverines.

Even when they played, the Terrapins often were left short-handed. Four players missed last week’s game against Rutgers because of “medical reasons,” including starting quarterback Taulia Tagovailoa sat out the Rutgers game for “medical reasons” according to the team, which does not specify which players test positive for COVID-19.