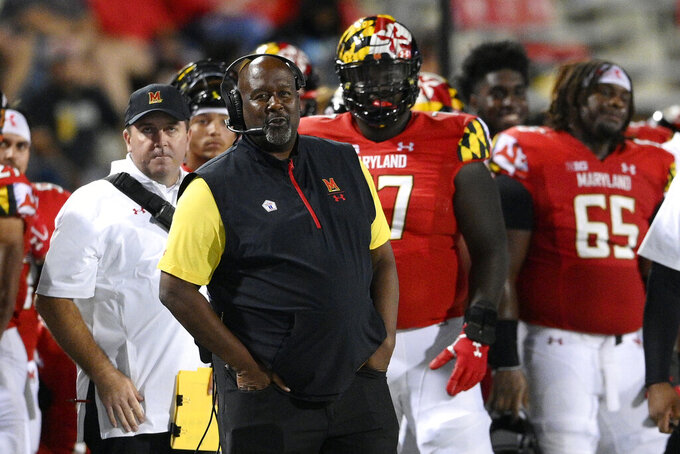 COLLEGE PARK, Md. (AP) — This week Maryland plays at Illinois for the first time in program history — which says a lot about how new the Terrapins still are to the Big Ten.

However, the Terps do have a couple coaches who are plenty familiar with the Illinois program.

“For me and my family, a special place. Raised my kids there. My two older sons both graduated from high school there, and the two younger ones call it home," Locksley said Tuesday. "We were able to do some exciting things there.”

Locksley coached under Zook at Illinois — it's the other way around now — and the Illini went 1-15 in the Big Ten in Zook's first two seasons. Then they went to the Rose Bowl.

Locksley would love a similar upturn in his third year as Maryland's coach. The Terps beat West Virginia in their opener, then drubbed Howard 62-0 last weekend. Maryland now will try to win its Big Ten opener for the first time since 2018. The Terps lost their last two conference openers by a combined score of 102-3.

There are a half-dozen Big Ten teams Maryland had never played before 2014, when the Terps joined the league. Illinois is one of them. The only meeting between the teams so far was in 2018, when Maryland beat the visiting Illini 63-33.

“This is the first time obviously for Maryland to go there to play — which completes us now having been to every team in the Big Ten, with an away game," Locksley said. "It starts Big Ten play, which is another season for us, different than the out-of-conference games. It's a Big Ten opener, national TV audience, so it will be the show.”

Illinois already has a Big Ten victory under its belt. The Illini opened the season with a win over Nebraska. That game was on Aug. 28, a week before much of the country began playing.

“Good team, play with energy. Their home crowd really gets into the game, which is important," Maryland linebacker Ruben Hyppolite said. "That’s just going to allow us to up our focus more.”

The Illini are reeling a bit now. After the victory over Nebraska, they lost to Texas-San Antonio and Virginia.

As for the connections between Locksley, Zook and Illinois, Locksley says that hasn't really been a major issue so far this week.

“We haven't really even discussed it," he said. "When you have a short week like this, when the turnaround is pretty quick — fortunately for us, with the way we're staffed and the way we're organized, we were able to get the scouting reports out a day early, were able to get them done Sunday. Had good meetings with our players, and then went out and had a Monday practice Sunday night.”

Still, Locksley's stop at Illinois was an important step in the Maryland coach's career. Prior to that, he had mainly been a position coach at the college level.

“It's the first time I had a chance to be a coordinator, and not surprising that a guy like Ron Zook would give me that opportunity, at 36 years old, to run the offense. We did some really good things, year three were able to take a team to the Rose Bowl," Locksley said. "But again, those things are in the past. This is the ‘21 Terps, the ’21 Illini.”