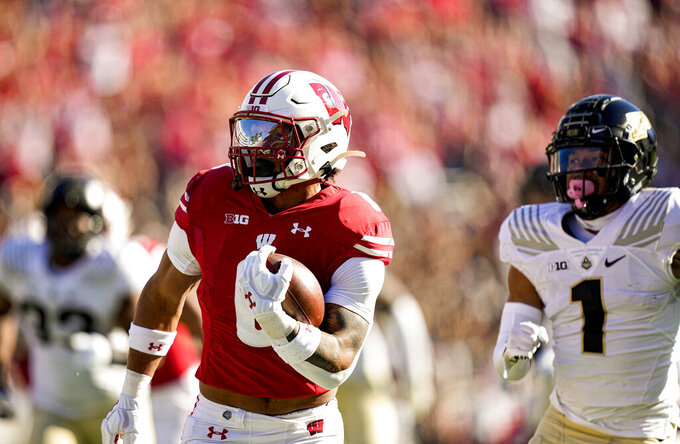 Wisconsin running back Braelon Allen runs against Purdue defensive back Reese Taylor (1) for a first down during the first half of an NCAA college football game Saturday, Oct. 22, 2022, in Madison, Wis. (AP Photo/Andy Manis)

Line: Wisconsin by 4 1/2, according to FanDuel Sportsbook

A Maryland victory would give the Terrapins a three-game winning streak and their first season with at least seven regular-season victories since 2014, when they finished 7-6. Maryland also would have four conference wins, matching its highest total since joining the Big Ten in 2014. Wisconsin is seeking to earn back-to-back victories for the first time this season.

Wisconsin RB Braelon Allen vs. Maryland run defense. Since getting held to 2 yards in a 34-10 loss to Illinois, Allen has rushed for at least 113 yards in each of Wisconsin’s last three games. Maryland is allowing 120.3 yards rushing per game and 3.4 yards per carry.

Maryland QB Taulia Tagovailoa is expected to play after missing the Terrapins' most recent game, a 31-24 victory over Northwestern on Oct. 22, with a sprained right medial collateral ligament. Tagovailoa has completed 72.5% of his passes for 2,001 yards with 13 touchdowns and five interceptions. He needs 430 yards passing to pass Scott Milanovich for No. 1 on the Terps’ career list.

Wisconsin: S John Torchio has intercepted five passes, putting him in a tie for the Football Bowl Subdivision lead. He has scored on two of those interceptions, first against Illinois State and later against Purdue. The only other Wisconsin player to score on multiple interception returns in the same season was Aaron Henry in 2010. Torchio also has 42 tackles to rank second on his team.

Both teams are returning to action after having last weekend off. … Wisconsin has intercepted 14 passes. The only defense with more interceptions is Illinois with 15. … Maryland has scored at least 27 points in 10 straight games, the longest such streak in program history. The only Power Five teams with longer active streaks of games with at least 27 points are Tennessee (25), TCU (23) and UCLA (13). … Wisconsin QB Graham Mertz has thrown nine touchdown passes over his last three games. He has 17 this season to rank second in the Big Ten. … Maryland has 12 gains of over 40 yards this season. Ohio State is the only Big Ten team with more. … Wisconsin S Hunter Wohler and OLB Nick Herbig are expected to play. Wohler hasn’t been in a game since the season opener due to an injured left leg. Herbig, who has a Big Ten-leading six sacks, missed the Purdue game because of a knee injury. ... Maryland’s Roman Hemby has six rushes over 30 yards. As a team, the Terps have five rushes over 50 yards. … Maryland had one turnover in October, its fewest in any calendar month with at least four games in the last 25 years.