McCall, Heiligh lead No. 20 Chants to rout of Georgia State 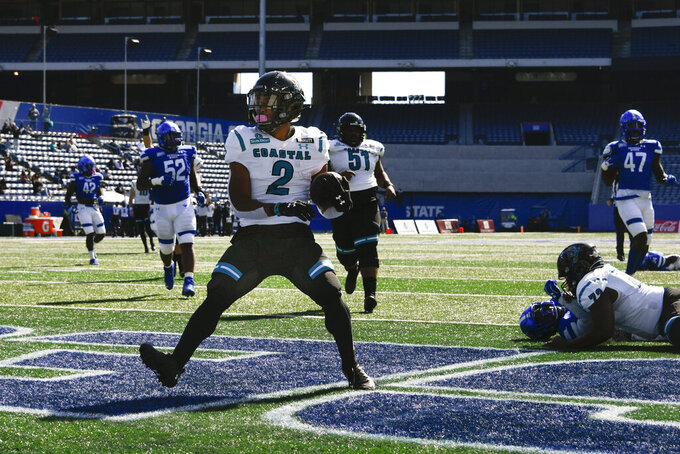 Coastal Carolina running back Reese White (2) scores a touchdown during the first half of an NCAA football game against Georgia State, Saturday, Oct. 31, 2020, in Atlanta. (AP Photo/John Amis) 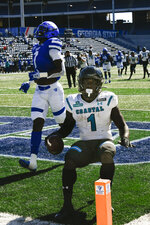 ATLANTA (AP) — Coastal Carolina coach Jamey Chadwell could sense something special was about to unfold.

“I was like, ‘We’re ready to go or we’re getting ready to walk into a trap because we were so full of ourself,’ ” Chadwell said. “But we had a great week in all three phases, and then Friday night they were locked in. So I felt good coming in and after they doinked that field goal and we went right down the field, you could sense our guys saying, ‘Here we go.’ ”

Grayson McCall passed for 254 yards and four touchdowns, Jaivon Heiligh scored twice, and No. 20 Coastal Carolina cruised to a 51-0 victory over Georgia State on Saturday.

CJ Marable added two rushing touchdowns and 100 all-purpose yards for the Chanticleers (6-0, 4-0 Sun Belt Conference). Coastal Carolina has its most wins in a single season since joining FBS in 2017.

“We’re trying to stay ranked," Chadwell said. "We don’t want to lose that. I know that’s something that can go by the wayside quickly. I’m trying to tell our guys to enjoy the ride. The only statement we’re trying to make is we feel great about our team, we’re going to play hard every week and hopefully it’s good enough to win."

Georgia State (2-3, 1-3) looked nothing like the team that began the day leading the Sun Belt in scoring at 42 points per game. The Panthers’ previous two losses were by a combined 10 points with both coming down to the final possession.

“We were not ready to compete," Georgia State coach Shawn Elliott said. "I can’t tell you the answer. It’s going to take some soul searching. From the opening play, it was a disappointing day for our coaching staff, our players and everyone involved, and it’s unacceptable. I don’t think we can take anything away from it. We were consistently bad in all three phases of the game and it showed."

The Chants struck first to take a 7-0 lead on Heiligh’s 35-yard touchdown catch in the first quarter. On fourth-and-seven, McCall connected with a streaking Heiligh on a wheel route as the receiver got behind cornerback Quavian White down the left sideline.

Coastal Carolina made it 14-0 when Marable, coming out of the backfield, ran a route down the left side to easily beat outside linebacker Jordan Strachan for an 18-yard score in the second quarter.

The Chants, who churned out 430 yards of total offense, led 34-0 at halftime after Reese White scored on a 13-yard run, Heiligh caught a 10-yard pass for his sixth TD reception of the season and McCall ran for a 2-yard score. Marable added a short TD run on the opening drive of the third to make it 41-0, and Kameron Brown had a touchdown catch near the end of the third.

“You can’t go in saying you’re going to beat a team 51-0," Heiligh said. “But I felt like we were executing, they weren’t and that was the difference today."

McCall, who missed last week’s win over Georgia Southern with an upper body injury, and several of the starters left the game for the entirety of the fourth.

“Having Grayson back made a huge difference," linebacker Jeffrey Gunter said. “When he's at the helm, man, we're a different team. With him playing, we can take on anybody."

Coastal Carolina began the game tied for first in the Sun Belt and ranked 11th nationally with a plus-four turnover margin, including seven interceptions. It added another pick against and fumble recovery against Georgia State.

The Chants put up a season-best first half in points and yards (294).

Coastal Carolina: The Chants could move up in the next poll, and they can thank their opportunistic defense in the second quarter. Tarron Jackson forced receiver Sam Pinckney to fumble, Brayden Matts recovered and White soon scored on a pitch to the left side. Silas Kelly had an interception of Quad Brown in the right flats, and it wasn’t long before McCall and Heiligh connected in the middle of the end zone for a 27-0 lead. Coastal Carolina’s 11 takeaways have resulted in 49 points this season.

Georgia State: The Panthers never found any rhythm after Noel Ruiz missed a field goal on the opening possession. Most alarming was the lack of a running game. Destin Coates began the game leading the Sun Belt in rushing and ranked fifth nationally with an average of 126 yards per game. He finished with 11 carries for 56 yards, and Georgia State averaged just 2.8 yards on 24 carries. The Panthers totaled five first downs.

Coastal Carolina: At Troy next Saturday.