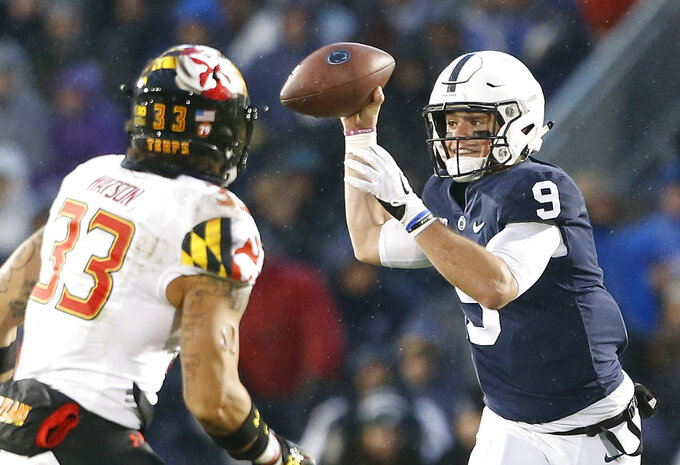 STATE COLLEGE, Pa. (AP) — Just before he ran out of the Beaver Stadium tunnel for the last time, Trace McSorley gathered his teammates and made a promise he probably didn't have to make.

"I just said, 'I promise you guys that I'm going to leave everything out there today,'" McSorley said following No. 15 Penn State's 38-3 victory over Maryland on Saturday.

But they've already come to expect that from No. 9 — the program's winningest quarterback.

The senior dual-threat added 64 rushing yards on 11 carries for the Nittany Lions and made good on his promise by doing literally everything he could to ensure a win.

He threw a 34-yard bullet through freezing rain to KJ Hamler on the game's first play, sprinted downfield to throw a block that opened Miles Sanders up for a 35-yard run on the next, then skipped into the end zone from 3 yards out to cap the quick opening drive.

McSorley added another touchdown run two possessions later when he scrambled through a pair of defenders up the middle for 20 yards and a 14-3 lead. Later, his teammates jumped up and down on the sideline when the shifty running opted to bowl over Maryland safety Jordan Mosley, rather than juke around him in the open field, to pick up 17 on 3rd-and-15.

"With Trace, it's not the sexy quote that you guys are looking for, but It's consistency," Penn State coach James Franklin said. "You love Trace as what you want in all your players because he's the same guy every day. The guy hasn't had a bad day in five years."

Sanders finished with 128 yards on 14 carries, Hamler caught three passes for 90 yards and Jake Pinegar added a 25-yard field goal for the Nittany Lions who won their third straight.

Tyrrell Pigrome completed 14 of 23 passes for 185 yards but was sacked five times for the Terrapins (5-7, 3-6). They will miss out on a bowl trip for the third time since joining the Big Ten.

Maryland kicker Joseph Petrino made a 26-yard field goal to break the shutout.

"We obviously left some plays out on the field today," Maryland interim coach Matt Canada said. "I'm disappointed in that for our players. It's hard to see that happen when you know how bad they wanted it."

Since it was shredded by No. 4 Michigan on Nov. 3, Penn State's defense has played near-flawless football.

The Nittany Lions notched five sacks and 15 tackles for loss on the afternoon. They finished the season with 33 stops behind the line of scrimmage over the final three weeks. Controlling the edges was a focus against the Terps who racked up 353 and 339 rushing yards in each of their last two games.

But Maryland speedster Anthony McFarland was held in check all afternoon. He finished with just 12 yards on six carries while Javon Leake led the Terps with 34 rushing yards on 11 touches.

"Guys wanted to have no regrets," Penn State safety Nick Scott said. "Finishing it off the right way was something that was huge for us."

Maryland: A year that began with the death of offensive lineman Jordan McNair following a team workout in the spring ends on a 4-game losing streak for the Terrapins who'll miss out on a bowl game for a second straight season. The program will have to make a call on Canada, but Maryland has a nice class of freshman to give whoever takes over a young core to build around.

Penn State: The Nittany Lions spent much of this season trying to iron wrinkles out on offense with a new coordinator and a few fresh skill players. Their defense, meanwhile, spent the last three weeks of the season blossoming. After giving up 42 points to No. 4 Michigan in Ann Arbor on Nov. 3, Penn State allowed just 10, seven and three over its last three games. Much of that success can be traced to a front seven that helped produce 43 sacks on the season.