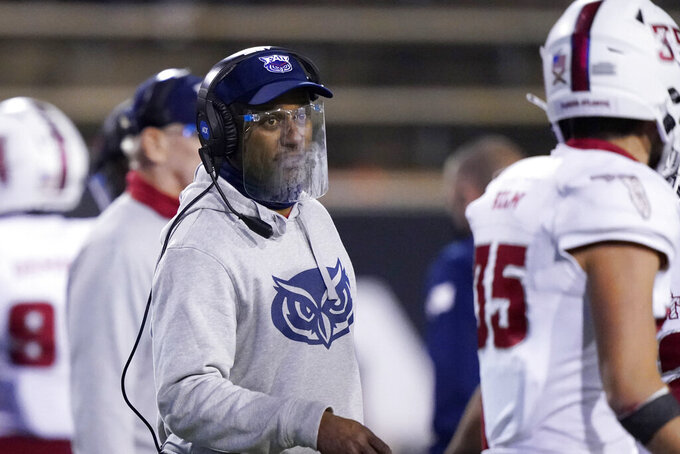 Both teams are trying for a positive finish to their head coaches' first season, Florida Atlantic's Willie Taggart and Ryan Silverfield of Memphis. Florida Atlantic is trying to remain perfect in bowl games after winning the program's first four. Memphis is seeking its first bowl win since 2014.

A Memphis passing game led by quarterback Brady White and All-American Athletic Conference wide receiver Calvin Austin III against the Florida Atlantic defense. The Owls are allowing just 175.6 passing yards per game —11th-best nationally — with six touchdowns in eight games. Despite the shortened season, Austin has 1,025 receiving yards. Florida Atlantic is led by cornerback Zyon Gilbert, who is from Montgomery.

The game was created after the cancellation of the Fenway Bowl. ... The Tigers are playing in their school-record seventh straight bowl. This is the third bowl game in four years for the Owls and fifth since 2007. It's their first bowl outside Florida since 2008. ... Taggart and his son, Willie Taggart Jr., are one of six father/son combo for player and head coach at the same FBS school. ... Memphis hasn't won a bowl since a double-overtime victory over BYU in the 2014 Miami Beach Bowl. ... The Tigers closed the regular season with a 30-27 win over Houston after Riley Patterson kicked a 47-yard field goal as time expired.