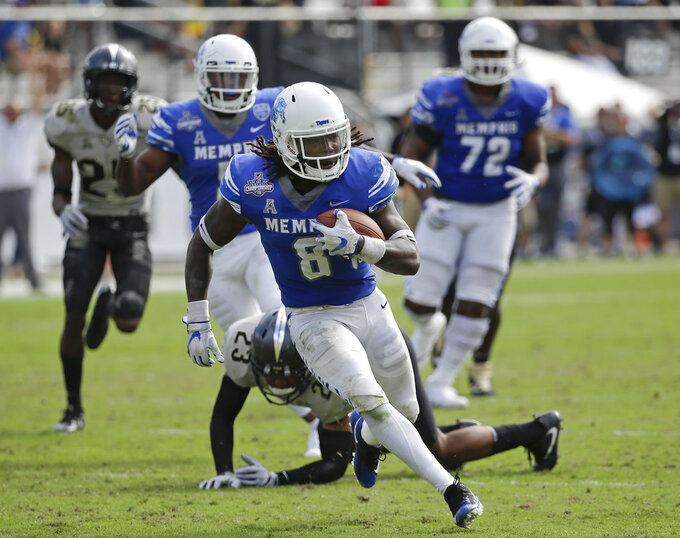 Memphis' Darrell Henderson has bigger goals to accomplish, so he doesn't have time to waste celebrating his American Athletic Conference record or his status as the nation's second-leading rusher.

Memphis (8-4) carries a four-game winning streak into Saturday's AAC championship game against No. 7 Central Florida (11-0, No. 8 College Football Playoff ). The Knights have won 24 straight games over the last two years but will be playing this week without injured star quarterback McKenzie Milton.

The Tigers' opportunity to claim a conference title comes one week after Henderson set the AAC's single-season rushing record.

"It felt good, but I had to flush that because we've got a (chance at a) bigger accomplishment this week," Henderson said. "We've got to go play for the conference championship, so I'm just focused on my team right now. This championship is more important right now."

This game represents a second chance for Henderson, whose potential go-ahead 32-yard touchdown run was nullified by a holding penalty in the fourth quarter of a 31-30 loss to UCF last month. Even without that touchdown, Henderson still rushed for 199 yards in that game.

"We've just got to play relentless and make sure we finish this game," Henderson said. "We just had too many turnovers and too many mistakes (last time)."

Henderson is the biggest reason why Memphis is back in the conference championship game one year after losing quarterback Riley Ferguson and Chicago Bears rookie receiver Anthony Miller, who had formed one of the nation's most dynamic passing combinations.

Memphis has utilized a more run-oriented offense this year while leaning heavily on Henderson, who had rushed for 1,154 yards last season despite sitting out a Liberty Bowl loss to Iowa State with a hamstring injury. Memphis coach Mike Norvell says Henderson gained about 15 pounds in the offseason to prepare for the increased workload.

The 5-foot-9 junior from Batesville, Mississippi has responded by rushing for 1,699 yards and 19 touchdowns while averaging 8.6 yards per carry. He has gained at least 40 yards on 13 separate plays from scrimmage (10 runs, three catches) to lead all FBS players.

"He's got great vision and the ability to make you miss, and he's got enough power to run through you as well," UCF coach Josh Heupel said. "He's electric when he gets into space and can turn a 5-yard gain into a big one real quick."

While Henderson has put up huge rushing totals, he prides himself on his versatility. Henderson has caught 41 passes over his last two years while developing more of an all-around game.

Henderson's three touchdown catches and 19 touchdown runs give him 22 overall touchdowns this season to match Singletary for the FBS lead. Norvell calls him an "absolute complete back" while citing Henderson's blocking and receiving ability.

"He is an unselfish player who will do whatever it takes for this team to be successful," Norvell said.

Henderson's drive has enabled him to prove many people wrong.

While his explosiveness was never questioned, Henderson says his lack of size caused Power Five schools to shy away from him.

"It just put a chip on my shoulder and made me hungry," Henderson said.

Henderson said he felt at home during a visit to Memphis, where he's been proving his worth ever since. Yet as he reflects on his records and his lofty status in the NCAA rankings, Henderson believes he's capable of much more.

"I feel good, but I still feel like I could have played better," Henderson said. "I just take it game by game and try to learn from each game and each mistake I make in a game."

Consider that a warning to UCF and Memphis' eventual bowl opponent.