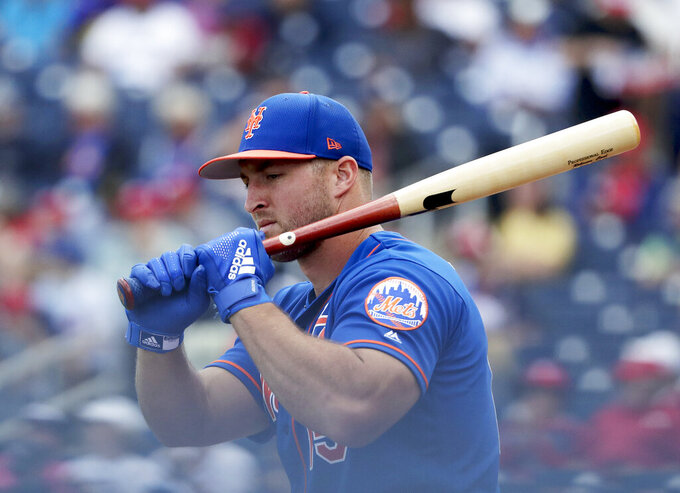 FILE - In this March 7, 2019, file photo, New York Mets' Tim Tebow loosens up before batting in an exhibition spring training baseball game against the Washington Nationals in West Palm Beach, Fla. Tebow is set to begin his third full season of minor league baseball. He was assigned to the Triple-A Syracuse Mets just over two weeks ago and opening day is Thursday, April 4, 2019. (AP Photo/Brynn Anderson, File)

SYRACUSE, N.Y. (AP) — Tim Tebow is one step away from the Big Show. He's still in no rush.

"I enjoy the process every day, enjoy every opportunity I get," Tebow said as he prepared for Thursday's International League opener with the Syracuse Mets. "That's one thing I take a lot of pride in — having fun and not just the destination but truly enjoying the journey."

Tebow, the 2007 Heisman Trophy-winning quarterback for the Florida Gators, a team he led to a pair of national championships, bounced around the NFL for three years (2010-12), playing 35 games with the Denver Broncos and New York Jets and also delving into broadcasting before deciding to turn his main focus to baseball.

"One of the hardest decisions I ever made was choosing to go football over baseball," he said. "It's an itch I've always had and a passion I've always had, and it didn't go away after years. I had a lot of other opportunities, but this is something I wanted to pursue.

"I also did it without a lot of support. It's not about proving people wrong or pleasing people, it's about living a dream, pursuing your passion and trying to do it with as much purpose as you can. That's how I've always lived."

Tebow faced his sternest test yet in 2018, playing last season for Binghamton of the Double-A Eastern League, a level of ball that tends to separate prospects destined for bigger things. He turned in a respectable second full season of minor league ball, batting .273 with six home runs, 14 doubles and 36 RBIs in 84 games and punctuated his arrival on New York's Southern Tier by slamming the first pitch he saw over the fence in right field for a three-run homer on a frigid night.

Tebow, who made only one error in 83 chances in the outfield, hit .301 in June and .340 in 15 games in July and made the Eastern League All-Star Game. A broken bone in his right hand ended his season prematurely.

"Last year was huge for my development. It's going to take a lot more work," Tebow said. "There's moments when it (frustration) creeps in, but that's where you have to have mental toughness and stop that thought right in its tracks. If not, this game is too hard.

"You're going to have highs and lows, but you have to be able to stay on the course and when you need to, speak life into it."

Tebow was re-assigned to minor league camp just over two weeks ago after hitting .267 with one RBI in eight spring training games. He has at least demonstrated he belongs in professional baseball.

"Trying to get those movements for this game where it's just that natural, I don't think I've fully done that yet, but I think I've made a lot of strides," he said.

Syracuse Mets manager Tony DeFrancesco, a veteran of Triple-A baseball, has watched the 6-foot-3, 245-pound Tebow, with his thick arms and imposing frame, from both sides of the diamond.

"He's come a long way," DeFrancesco said. "I was on the other side in his first major league spring training game, and for me at that point he looked like a football player trying to play baseball. He was big and thick. He was slow.

"Last year was the first time I got to watch Tim on the same side and you see the major adjustments and the time and energy this man has put in to be the best baseball player he can be," DeFrancesco added. "Repetition-wise, it takes a long time that Tim's lost out on, but I believe he's a quick learner. It does take a lot of reps for him to really understand how to hit major league pitching, and I think this will be a great adjustment for him here."

That Tebow is a former client of new Mets general manager Brodie Van Wagenen, who took the job last October after serving as an agent, has helped.

The forecast for the opener calls for temperatures in the low 40s with a slight wind and a very slight chance of rain.

There is anticipation in the air, just as there was an hour down the road in Binghamton a year ago.

"It's his time to shine now," DeFrancesco said "I'm hoping he has a great season. It would be a great story and you always root for an underdog. Tim is going to fight all the way through. It's not that easy.

"I hope one day this year I get to say, 'Tim Tebow, you gotta go to Citi Field and play for the New York Mets.' "