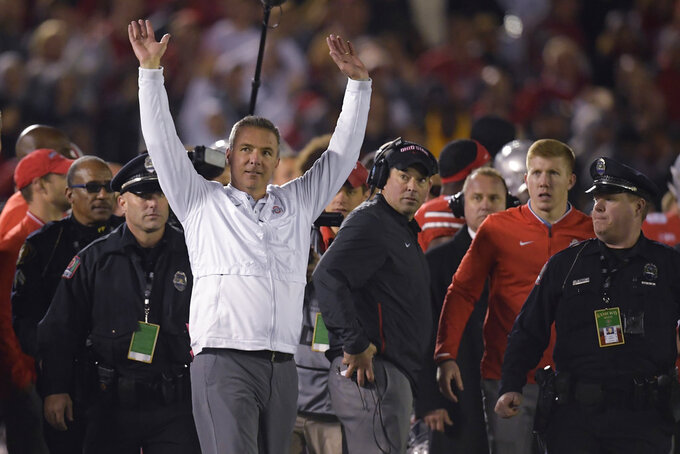 PASADENA, Calif. (AP) — Dwayne Haskins passed for 251 yards and three touchdowns, and Urban Meyer finished his coaching career at Ohio State with a 28-23 victory after the Buckeyes held off Washington's thrilling fourth-quarter comeback in the 105th Rose Bowl on Tuesday.

Parris Campbell, Johnnie Dixon and Rashod Berry caught TD passes in the first half for the fifth-ranked Buckeyes (13-1), who took a 25-point lead into the fourth.

But Myles Gaskin threw a touchdown pass and rushed for two more scores for the No. 9 Huskies (10-4), scoring from 2 yards out with 42 seconds left.

The Buckeyes intercepted Jake Browning's pass on the 2-point conversion attempt and then recovered the Huskies' onside kick to wrap up the final game of Meyer's seven-year tenure.

The 54-year-old coach is walking away after going 83-9 at Ohio State with one national championship, three Big Ten titles and this Rose Bowl victory, the Buckeyes' eighth overall in the Granddaddy of Them All.

NEW ORLEANS (AP) — Sam Ehlinger ran for three touchdowns, the Texas defense largely held Georgia's offense in check, and the Longhorns earned their first 10-win season since 2009 with the win in the Sugar Bowl.

Ehlinger was the star of a gritty win, running for a 2-yard touchdown in the first quarter, a 9-yard score in the second, and a 1-yard TD in the fourth. The 6-foot-3, 230-pound sophomore finished with 64 yards rushing on 21 carries and also threw for 169 yards.

Texas jumped out to a 17-0 lead by early in the second quarter, largely because of Georgia's mistakes on special teams and offense.

Georgia got back into the game with a methodical 12-play drive that ended with Jake Fromm finding Brian Herrien for a 17-yard touchdown, but Texas still took a 20-7 advantage into halftime.

Fromm completed 20 of 34 passes for 212 yards, three touchdowns and one interception. The Bulldogs scored a touchdown with 14 seconds left to pull within 28-21 but Texas recovered the ensuing onside kick.

LSU (10-3) started its first Fiesta Bowl without several key players on defense and fell into an early 11-point hole against the high-scoring Knights (12-1).

The Tigers clawed back behind Burrow and a defensive front that made life difficult for UCF quarterback Darriel Mack Jr.

Burrow was slow getting up after being blindsided by 313-pound defensive lineman Joey Connors on an interception return for a touchdown in the first quarter. LSU's junior quarterback returned to the game and picked apart UCF's secondary, hitting 21 of 34 of passes, including two touchdowns to Justin Jefferson.

LSU sacked Mack five times and made him rush numerous throws, holding the nation's third-best offense to 250 total yards — 295 below its average — while spoiling the Knights' bid for a second-straight self-proclaimed national title.

TAMPA, Fla. (AP) — Safety Jake Gervase made an interception in the end zone to help preserve a late lead, and ball-hawking Iowa Hawkeyes beat Mississippi State in the Outback Bowl.

Gervase also batted down an errant fourth-down pass to end the Bulldogs' final drive at the Iowa 32 with 25 seconds left. Two earlier Mississippi State threats in the fourth quarter led to only three points.

The Hawkeyes totaled just 199 yards, with 75 coming on a touchdown pass from Nathan Stanley to Nick Easley, but they converted three takeaways into 17 points.

Stanley threw for 214 yards and three scores. The Hawkeyes won despite netting minus 15 yards rushing, and their three running backs totaled 4 yards in 15 carries.

Iowa (9-4) earned its biggest postseason victory since an Orange Bowl win over Georgia Tech to cap the 2009 season.

Mississippi State (8-5) lost to a team outside the top 15 for the first time.

ORLANDO, Fla. (AP) — Benny Snell Jr. ran for 144 yards and two touchdowns to become Kentucky's career rushing leader and help the Wildcats wrap up their best season in more than four decades with a victory over Penn State in the Citrus Bowl.

Snell scored on runs of 2 and 12 yards in the second half, then carried for a couple of crucial first downs to help Kentucky (10-3) run out the clock after Trace McSorley of Penn State (9-4) trimmed a 27-7 deficit to three points despite playing with a foot injury.

McSorley threw for 246 yards and two touchdowns, and the Nittany Lions' career passing and wins leader also rushed for a team-high 75 yards on 19 attempts.

Lynn Bowden Jr. scored on a 58-yard punt return for Kentucky, and Southeastern Conference defensive player of the year Josh Allen had three of the Wildcats' six sacks.

Kentucky finished with its first 10-win season since 1977, when the Wildcats went 10-1.