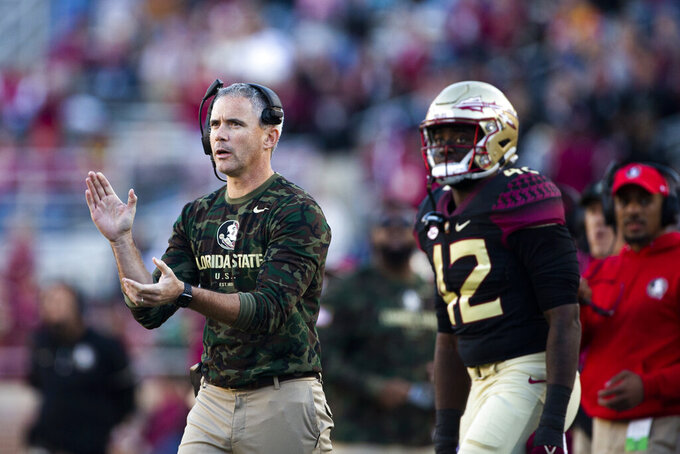 TALLAHASSEE, Fla. (AP) — Miami and Florida State are unranked teams and the rivalry doesn’t have the fanfare it had when the programs combined to win seven national titles between 1983-2001.

But the Hurricanes (5-4, 3-2 Atlantic Coast Conference) and Seminoles (3-6, 2-4) are still playing for tangible goals. Miami needs a win to keep whatever realistic hope it has of winning the ACC’s Coastal Division alive. Florida State needs a win to extend its hopes of finishing the regular season at 6-6 and becoming bowl-eligible.

This, obviously, is not the good old days.

Neither team is playing for a national title. The teams are entering with 10 combined losses, which is the most for a Miami-Florida State game since 1975, when the Hurricanes came in at 1-6, the Seminoles at 2-7, and Miami prevailed 24-22.

Nonetheless, to Miami and Florida State, it is still of massive significance. And if any Hurricane wasn’t sure about that, they learned quickly after last week’s win over Georgia Tech went final.

“When we were in the locker room, I don’t know if we lasted 90 seconds before bringing it up,” Miami coach Manny Diaz said. “It’s a great rivalry. And going to Tallahassee, it’s always going to be a very, very difficult place to win. They’re already a much better team in my mind than what their record indicates. Much, much improved from where they were a year ago. And, heck, it’s Miami-Florida State.”

Miami is much improved from where it was earlier this season, winners of three straight in large part because of the play of quarterback Tyler Van Dyke.

He’s one of only six quarterbacks in the country with more than 1,000 yards passing over the last three weeks, and among those, one of only two — Wake Forest’s Sam Hartman is the other — to do so while averaging at least 10 yards per pass attempt.

“Looking back at the history, that’s why I came here, that’s why a lot of people are here,” Van Dyke said.

It’s Florida State coach Mike Norvell’s initial taste of the rivalry firsthand since he missed the September 2020 game at Miami due to COVID. The Hurricanes shredded the Seminoles 52-10.

“You come to Florida State and the first thing you think about are those games and not only what they mean to the program, to the state, the fan base, everybody involved,” Norvell said. “... It was unfortunate last year that I wasn’t able to be there. It’s been a long time coming.”

Quarterback Jordan Travis missed the Seminoles’ loss to North Carolina State last Saturday but his return to practice this week offers Florida State a chance to re-energize the ground attack while also be able to elude the pass rush. Travis has completed 66 of 105 passes (62.8%) for 812 yards and 11 touchdowns, with 340 rushing yards and four touchdowns. His ability to run complements Florida State’s offensive identity, running the ball, and gives the offense a different look compared to when McKenzie Milton is in the game.

Miami will try to beat Florida State for a fifth consecutive year, with five different quarterbacks. Malik Rosier got the win in 2017, N’Kosi Perry in 2018, Jarren Williams in 2019 and D’Eriq King last season. Van Dyke played in last season’s game, taking the final snap of Miami’s final possession. He checked in with 33 seconds to go and handed the ball off once. He’ll become Miami’s sixth starter in a span of six FSU games; Brad Kaaya started in 2016.

Miami had nine players score in last season’s 52-10 win over the Seminoles. Oddly, no more than one — and possibly none — will play Saturday. King (two TD passes), RB Cam’Ron Harris (two TD runs), RB Donald Chaney Jr. (two TD runs) and WR Michael Redding (one TD catch) are all out with injury. QB N’Kosi Perry (one TD pass) and WR Dee Wiggins (one TD catch) elected to transfer. TE Brevin Jordan (one TD catch) is in the NFL, as is K Jose Borregales (one field goal, six PATs). That leaves K Camden Price, a backup this season, as the lone scorer from 2020. He had the final extra point a year ago.

Florida State defensive end Jermaine Johnson leads the ACC in sacks (eight) and tackles for loss (11). He also leads Power Five defensive linemen in tackles (54). Johnson’s sacks are the most for a Seminole since Brian Burns had 10 in 2018. Defensive tackle Keir Thomas has 3.5 sacks in the last two weeks.

Miami leads the all-time series 35-30, which is close, but there have been wild ebbs and flows to it over the years. The Hurricanes are on a four-game win streak in the series, the fourth time they have a run of at least that many consecutive wins against Florida State. Meanwhile, the Seminoles have had three different streaks of at least five consecutive wins over Miami.