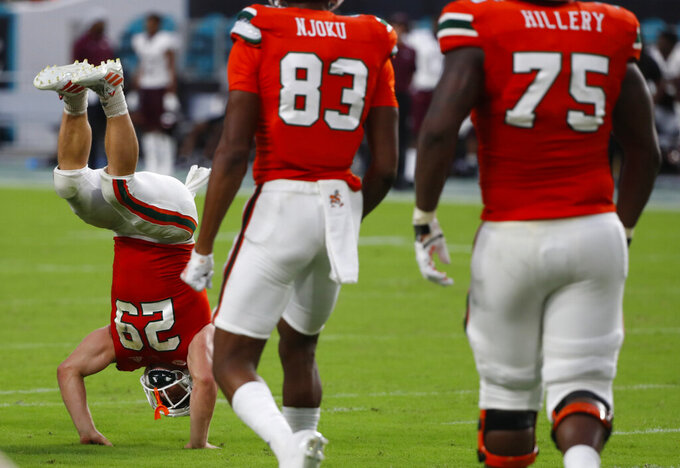 Miami defensive back Jimmy Murphy (29) celebrates after making a touch down during the second half of an NCAA college football game against Bethune-Cookman, Saturday, Sept. 14, 2019, in Miami Gardens, Fla. (AP Photo/Wilfredo Lee) 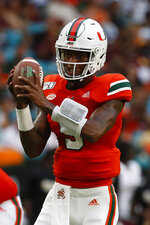 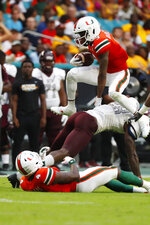 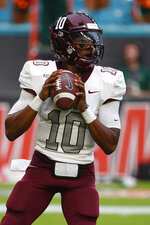 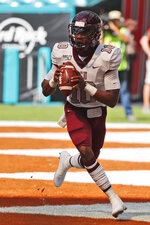 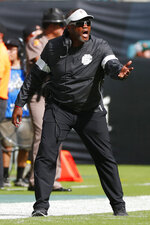 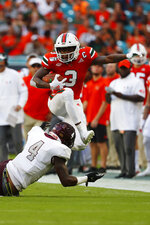 MIAMI GARDENS, Fla. (AP) — When former walk-on Jimmy Murphy scored his first career touchdown in the closing minutes for the Miami Hurricanes, he was tackled by an exuberant teammate, rose and performed a running handspring, climbed onto the bench, waved some team bling and pounded his chest.

"I give it a 10," quarterback Jarren Williams said.

The Hurricanes had reason to celebrate excessively Saturday. After starting the season with two losses for the first time since 1978, they gave rookie coach Manny Diaz his first victory by beating Bethune-Cookman 63-0.

Williams threw for 254 yards and three scores. DeeJay Dallas ran for 108 yards and three touchdowns. Miami outgained the Wildcats 590-137 and held them to four first downs.

And then there was Murphy, a 5-foot-7 senior beloved by his teammates. He went viral with his wild display after a 4-yard run for the game's final score.

"I'm pretty sure it's close to when your child's born," he said. "I'll have that for life. There's nothing better than being a Hurricane."

Miami (1-2) won its home opener to bounce back from season-opening losses at Florida and North Carolina.

"I prefer winning over losing," said Diaz, who replaced Mark Richt as coach after last season. "This is way more fun than the past two weeks."

Williams went 19 for 24 without a turnover or a sack, and his scoring passes covered 22 yards to K.J. Osborn, 32 yards to Michael Harley and 1 yard to Larry Hodges. Williams' longest throw was to Mark Pope for a 54-yard gain, and he departed late in the third quarter.

"I'm a winner," Williams said. "I hate losing more than anything. To get that first win for coach Diaz means a lot, because we play for him."

Bethune-Cookman (1-1) remained winless in five games against the Hurricanes, all since 2011, with the defeats by a combined score of 232-37.

"Obviously they're better," Wildcats coach Terry Sims said. "You can't make the mistakes we made against a team of that caliber."

The defeat was Bethune-Cookman's most lopsided since 1996.

The Hurricanes' turnover chain came out for the first time in two weeks when Robert Knowles recovered a fumble at midfield in the final minute of the first half. Two plays later, with two seconds remaining, Miami made the score 28-0 on Osborn's touchdown catch.

Miami had no takeaways in last week's loss at North Carolina.

"Defensively we had a statement we had to get off our chest," tackle Pat Bethel said.

The Hurricanes came up empty in the red zone twice in the first half. Bubba Baxa missed a 30-yard field goal try, and they were stuffed on a fourth-and-1 run.

Miami was 0 for 5 converting thirds downs in the first half.

Pope had three catches for 92 yards before he limped off the field late in the third quarter with an apparent left ankle injury. Diaz said the Hurricanes are hoping the injury's not serious.

The schedule is favorable for the Hurricanes, whose next four games are also at home. Their only game against a ranked team is Oct. 11 at home against No. 25 Virginia.

"There's plenty for us to still work on," Diaz said.