Miami to play road game of sorts against Louisiana Tech 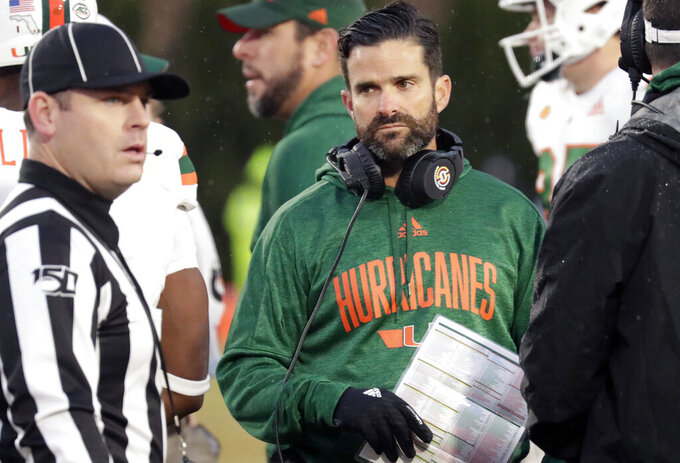 Miami is trying to finish the season with a winning record. Louisiana Tech wants a 10-win season for the first time at the FBS level, and could give Skip Holtz his first 10-win season as a head coach since he guided Connecticut to 10 wins in 1998.

Louisiana Tech’s passing against Miami’s secondary. The Bulldogs are averaging 277 yards through the air per game, while Miami is giving up just under 200 passing yards per game.

Louisiana Tech: QB J’Mar Smith missed two games this season for a suspension after he was found to be in violation of athletic department policy. The Bulldogs were 8-1 at the time, then dropped their next two games.

Miami: LB Shaquille Quarterman, if he starts as expected, will be playing in the 52nd game of his career. He started them all, never missing a game in his four seasons.

Louisiana Tech’s best defensive player, cornerback Amik Robertson, won’t play in the bowl game as he preps for the NFL draft. ... Miami is the worst team in the country at converting third downs, ranking 130th out of 130 teams. Louisiana Tech’s third-down defense entered bowl season ranked 32nd nationally. ... Miami might want to start fast — Louisiana Tech is 7-0 this season and 47-11 all-time under Holtz when leading at halftime. ... Miami coach Manny Diaz was on Holtz’s staff at Louisiana Tech in 2014, when the Bulldogs started their five-years-and-counting bowl winning streak. ... The Hurricanes are 1-8 in their last nine bowl games since 2007.