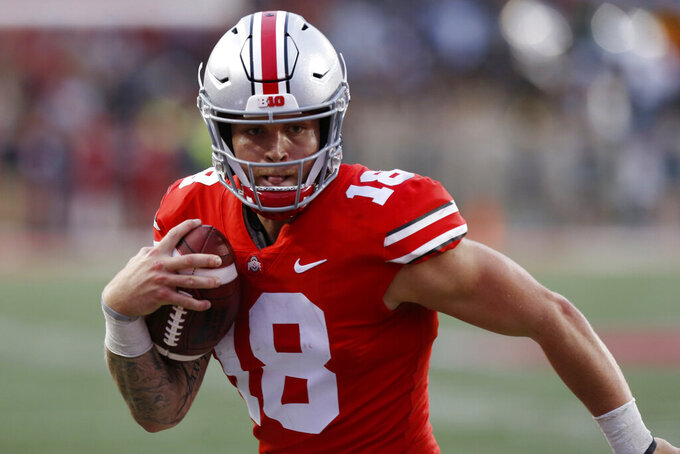 FILE - In this Sept. 22, 2018, file photo, Ohio State quarterback Tate Martell runs against Tulane during an NCAA college football game in Columbus, Ohio. Martell says he is transferring from Ohio State to Miami. Martell announced on Twitter early Wednesday, Jan. 16: “I’m a Hurricane.” Martell had entered his name into the NCAA transfer portal last week and was free to be approached by schools about a potential transfer. (AP Photo/Jay LaPrete, File)

DANIA BEACH, Fla. (AP) — Tate Martell greeted a few well-wishers in the airport after arriving in South Florida, then stopped to pick up a coffee and a sandwich.

The baristas, noticing the crowd around him, asked his name.

If Martell gets his way, they'll know his name — and his game — soon enough.

The former Ohio State quarterback is in the final stages of enrolling at Miami, arriving with four pieces of luggage on Thursday afternoon after flying in from Columbus to his new home. The plan is for him to complete his academic registration process no later than Friday, and start taking classes there right away.

"It was pretty wild and pretty quick," Martell told The Associated Press, speaking of the whirlwind that saw him leave the Buckeyes for the Hurricanes. "But it was something I needed to get done, obviously, in a short time. And with school starting I had to get it done fast."

Martell announced his plans to transfer to Miami early Wednesday. He redshirted as a true freshman at Ohio State in 2017, and completed 23 of 28 passes in six appearances as Dwayne Haskins' backup for the Buckeyes this past season.

Martell's transfer out of Ohio State came less than two weeks after former Georgia quarterback Justin Fields announced that he would be joining the Buckeyes. After arriving in South Florida, Martell said he's only looking forward to what awaits at Miami.

"I'm just happy to be where I'm at now, focused on going and competing down here and doing my thing," Martell said Thursday.

The next question will be how soon he gets on the field for the Hurricanes.

Martell is not leaving Ohio State as a graduate transfer, and he'll need more than one semester to graduate from Miami. That means he'll be applying for a waiver from the NCAA in order to play in 2019, and his attorney told the Toledo Blade on Thursday that he believes Martell's case has merit for reasons that include the Buckeyes' change in coaches from Urban Meyer to Ryan Day.

"There were some things that happened at Ohio State that we can potentially get some relief from the NCAA, and we're going to try it that way," the attorney, Travis Leach, told the newspaper. "The coaching staff turnover is an issue. There are a few things. There's no real bright-line test that tells you 100 percent how you can get a waiver. This is a tough one, but there are some good facts on his side."

Without the waiver or transferring as a graduate, Martell would have to sit out the 2019 season under NCAA rules.

Improving the production at quarterback is a top priority for Miami and new coach Manny Diaz this season. As a team, Miami passed for only 2,175 yards in 13 games this past season and ranked 115th out of 130 Football Bowl Subdivision teams in passing efficiency.

N'Kosi Perry, who split time with now-graduated Malik Rosier this past season, is expected back at Miami for 2019, as is redshirt freshman Jarren Williams. Martell would be competing with them for the starting job.

Martell was a five-star recruit out of Bishop Gorman High in Las Vegas, where he went 43-0 as a starter. The move to Miami will reunite Martell with two of his Bishop Gorman teammates — Brevin Jordan is a starting tight end for the Hurricanes, and safety Bubba Bolden is transferring in from USC.

The ties to Miami run deeper than just through Jordan and Bolden, Martell said.

"I know a bunch of guys on the team through recruiting and camps and high school and staying in touch," Martell said. "That was a big part of this for me, my relationships with the guys. And obviously my teammates, one that's here and one that will be here. So I'm excited for sure."