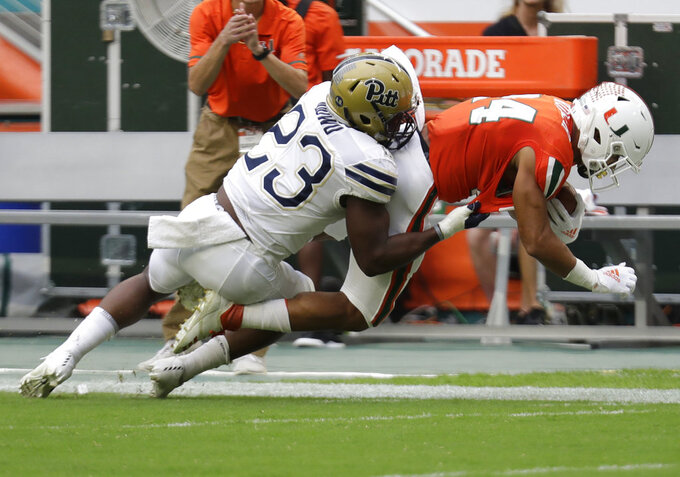 Miami running back Travis Homer, right, gets a first down as he is tackled by Pittsburgh linebacker Oluwaseun Idowu (23) during the first half of an NCAA college football game, Saturday, Nov. 24, 2018, in Miami Gardens, Fla. (AP Photo/Lynne Sladky)

MIAMI GARDENS, Fla. (AP) — The biggest contribution that a Miami player made on the Hurricanes' regular-season finale against Pittsburgh apparently came a night before kickoff, when Jaquan Johnson addressed his teammates.

He likened adversity to quicksand, and talked about how to escape.

"It really hit us hard, in the heart," running back Travis Homer said.

Homer was apparently listening, as were plenty of other Hurricanes. Homer needed only eight carries to rush for 168 yards, DeeJay Dallas ran back a punt for one of his two scores and Miami knocked off No. 24 Pittsburgh 24-3 on Saturday.

The Hurricanes (7-5, 4-4 Atlantic Coast Conference) yielded only 200 yards, held Pitt to a 1-for-15 effort on third-down conversion tries and forced 12 punts in a game where they yielded only 11 first downs. Miami also had six sacks and 14 tackles for loss.

Dallas also had a rushing touchdown for the Hurricanes, saying afterward he's gotten valuable help in recent days from a sports psychologist. And Homer is up to 969 yards this season, and would have a chance to become the 10th runner in Miami history with a 1,000-yard season if he gets 31 in the bowl game. His career rushing total is now 1,979 yards, which moved him four yards past Frank Gore for 12th on the Hurricanes' list.

Kenny Pickett completed 14 of 22 passes for 130 yards for Pitt (7-5, 6-2), which had already locked up the ACC's Coastal Division and a berth in next weekend's conference title game against Clemson. It was a reversal of last season, when Miami had the Coastal clinched and lost to Pitt in the regular-season finale for both clubs.

Homer's 64-yard touchdown in the third quarter put Miami up 17-3, and matched the longest scoring run of his Miami career. It also continued his knack for breaking big plays for scores; he has 12 rushing TDs for the Hurricanes, the average length of them being 27 yards.

Dallas scored on a 65-yard punt return in the second quarter, giving Miami one of those for the second straight week. The one last week came from Jeff Thomas, who left the Hurricanes on Wednesday — team officials said he was dismissed, while Thomas claimed that his departure was by mutual decision.

Either way, it didn't derail Miami on its Senior Day, even with the passing game struggling again. N'Kosi Perry completed only six of 24 passes for 52 yards, though was hurt by no fewer than seven dropped passes. It was the lowest passing total Miami posted in an ACC game, four yards shy of the 56 the Hurricanes managed against Georgia Tech in 2007.

Alex Kessman's 40-yard field goal for Pitt late in the third quarter allowed the Panthers to avoid the shutout. This was the first ACC season since 2009 that there were no shutouts in conference games.

Pittsburgh: The Panthers had won four straight before Saturday, averaging 40.8 points in those games. It was Pitt's lowest point total since 2010 — a 31-3 loss to Miami.

The Panthers will almost certainly fall out of the AP Top 25 after one week. The last time Pitt lasted more than two consecutive weeks in the poll was 2009. This current appearance was only the fifth for Pitt in the last 142 editions of the AP Top 25.