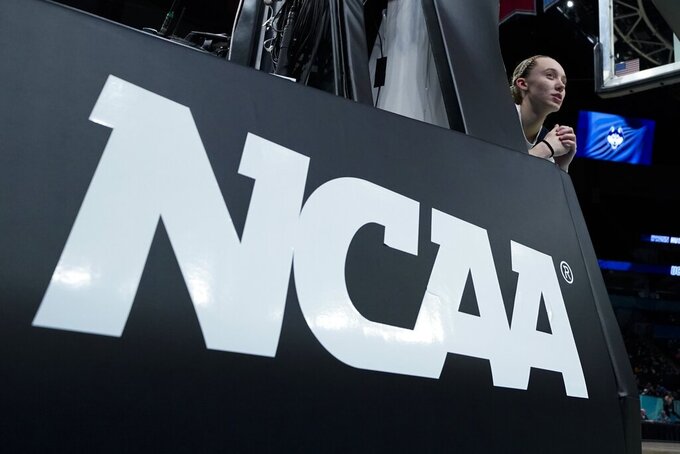 FILE - UConn's Paige Bueckers stretches during a practice session for a college basketball game in the final round of the Women's Final Four NCAA tournament April 2, 2022, in Minneapolis. In 2019, California became the first state to pass a law allowing athletes to earn money on endorsements, autograph signings and other activities, and by July 2021, the NCAA lifted its decades-old ban. (AP Photo/Eric Gay, File)

An agent for a prominent college athlete finally said out loud what schools likely hear in private: Pay the player more, or he will transfer to a school that will.

The brazen demand made on behalf of University of Miami basketball star Isaiah Wong last week provided a rare, unvarnished glimpse into the way elite college sports have been transformed by athletes’ rights to earn money through endorsements.

Teammates are comparing contracts. Players’ financial backers are swapping barbs. And coaches and administrators are struggling to keep their rosters full — and players happy -- without running afoul of the rules.

If Wong’s agent didn’t technically cross the bounds of what’s permissible -- players can’t seek payment simply in return for a promise to play at a specific school — then he firmly planted his foot on the line, according to labor experts.

“We are rapidly moving toward professionalization at full market rate for these NCAA players," said Michael LeRoy, labor law professor at the University of Illinois. "It’s very clear it's really not about endorsements, it’s about paying guys for their performance.”

Until recently, endorsement deals — or any compensation other than scholarships -- were strictly off limits for college athletes. Paying students was seen as a threat to the ideal of amateur sports. But legal challenges by athletes seeking to reap some of the billions of dollars schools were earning off of sports forced change. In 2019, California became the first state to pass a law allowing athletes to earn money on endorsements, autograph signings and other activities, and by July 2021, the NCAA lifted its decades-old ban.

The NCAA left in place only loosely defined guidelines: the deals could not be used to entice recruits or as a form of pay-for-play contracts.

Wong, who has apparently opted to stay at Miami, surely wasn’t the first player to have a representative make a demand based on a player's perceived market value, and he won’t be the last, experts said.

“He was just the first to be so public about it,” said Todd Berry, executive director of the American Football Coaches Association.

Tens of thousands of athletes across many sports have cashed in, according to Opendorse, a firm that works with schools on player-compensation matters ranging from from brand-building to compliance.

Deals can be worth as little as a few hundred dollars; some reportedly top $1 million. Football players earn the most, followed by women’s and men’s basketball players, according to Opendorse. Endorsements can be found far and wide, even in seemingly low-profile sports such as golf, rowing and hockey.

So far, it’s only been individual players like landing big deals, but that could change. LeRoy, the labor law professor, wondered what would happen if players from the same basketball team made a joint demand for more generous endorsement pay, putting a program in a bind.

It's easier for a football team to bounce back if players seeking better endorsements transfer to other schools because the rosters are larger than in basketball. But keeping everyone happy is a challenge for coaches.

“All 85 players are your roster and free agents every year,” Berry said. “This is a professional model. It's not a collegiate model anymore.”

“Basically, all we can do is pass on a number and say, ’Hey, you can talk to this guy, and he’ll tell you what we can or can’t do.' It’s really that simple,” Dykes said. “The concern for me is that somebody makes a promise to a kid and doesn’t follow through. We have no control over that.”

In many cases, the people to call are the ones running so-called collectives, sports marketing agencies that have sprung up to support specific schools and facilitate deals between their athletes and businesses such as apparel companies, energy drink companies, car dealerships and restaurants.

At Texas, one group is dangling $50,000 a year to individual offensive linemen for work supporting community charities, such as in-person appearances, promotions or representation. At the University of Oregon, billionaire Nike founder Phil Knight is part of group helping Ducks athletes line up deals.

Nigel Pack, a men's basketball player who transferred to Miami from Kansas State, signed with the software company LifeWallet for $800,000, plus the use of a car for two years. UConn basketball player Paige Bueckers last year was the first college athlete to sign a deal to represent Gatorade.

A large majority of athletic directors worry that collectives are improperly using endorsement contracts to recruit players from high schools or other colleges, according to a survey released Wednesday by LEAD1, an association of athletic directors at the 130 schools in the Football Bowl Subdivision.

“This is a transformational period in college sports and the results of our survey illustrate that (athletic directors) are extremely concerned with a number of key issues,” LEAD1 President Tom McMillen said.

But as cases like Wong's illustrate how quickly college sports is changing, there is new pressure to study the issue. On Thursday, the commissioners of the Southeastern Conference and Pac-12, two of the wealthiest leagues in college sports, were scheduled to meet with lawmakers in Washington to lobby for some federal regulations, which could include possible bans on using endorsement contracts as recruiting inducements and pay-for-play deals.

What caught many by surprise is how quickly deep-pocketed collectives and wealthy individuals aligned with major colleges poured in to raise and dangle millions of dollars in front of athletes.

“Nobody anticipated these collectives forming a year ago,“ LeRoy said. "It shows us how out of control the whole system is. It has become a way for schools to find a third-party payer for their athletic talent.”

Even financial backers can get caught off guard when an athlete decides the money isn't big enough, or when a teammate perhaps becomes a financial rival.

Mit Winter, a sports law and business attorney in Kansas City, Missouri, said some deals are pushing the boundaries, and making it seem as if players are simply getting paid to play, as opposed to being compensated at market rates for endorsements.

“Arguably these deals are violating NCAA rules and sometimes even state laws,” Winter said. “That's kind of the big question: Is the NCAA ever going to start investigating some of these deals?"

Some point to a future of collective bargaining between athletes and schools. That would mean schools treating athletes more like employees, which they have resisted.

Last September, the top lawyer for National Labor Relations Board said in a memo that college athletes should be treated as employees of their schools. That established a potential path for athletes to unionize or bargain over working conditions.

Collective bargaining would require some flexibility and creative thinking by schools and conferences. It could also let them bring their institutional power into negotiations with athletes, who may have competing interests, such as gender equity and different health and safety needs across multiple sports.

“It would be a nervous moment for teams and leagues. They don’t have experience with it and their TV contracts would be unsettled,” LeRoy said. “But at the end of the day, they would be able to get a stable kind of resolution to their labor problems.”