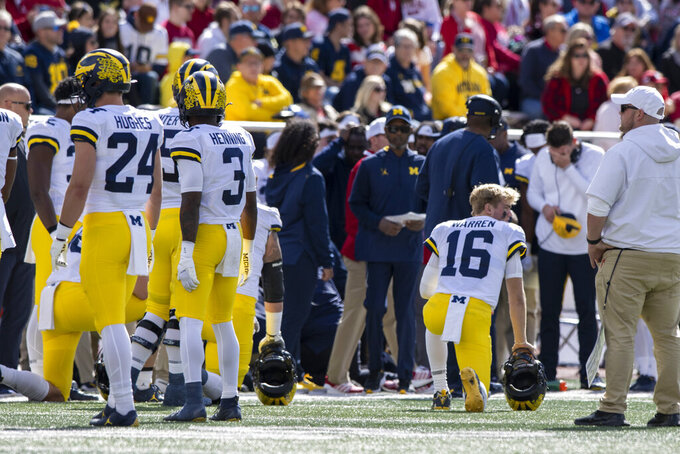 Michigan players and staff react as running game coordinator Mike Hart is given medical attention on the sideline before he was carted off the field on a backboard during the first half of an NCAA college football game, Saturday, Oct. 8, 2022, in Bloomington, Ind. (AP Photo/Doug McSchooler)

BLOOMINGTON, Ind. (AP) — Michigan running game coordinator Mike Hart is in stable condition but will spend the night at a hospital in Bloomington, Indiana, after being carted off the field during the first quarter of Saturday's game against the Hoosiers.

Trainers strapped him on a backboard and then drove Hart off the field before he was transported to a nearby hospital for further evaluation.

It was unclear what happened to Hart, who was standing in the bright sun on a cool, breezy day. He gave a thumbs-up sign before leaving Memorial Stadium and the Fox broadcast team said the team heard from Hart at halftime.

“Talking about Mike and his health, all our prayers go out to him,” coach Jim Harbaugh said. "We’ll move on with humble hearts. It’s great to have the win and continue to pray for Mike. He’s a strong guy, I have all the faith in the world in Mike Hart.”

Hart wound up on the ground after Indiana made an extra point to tie the score at 7 with 4:57 left in the opening quarter. Michigan’s players cleared the bench and spread out across the field, many dropping to one knee. Several Michigan coaches, including Harbaugh, stood nearby as trainers worked on Hart.

Hart rushed for more than 5,000 yards at Michigan and is still the career rushing leader for the fourth-ranked Wolverines. He also played professionally for the NFL's Indianapolis Colts.