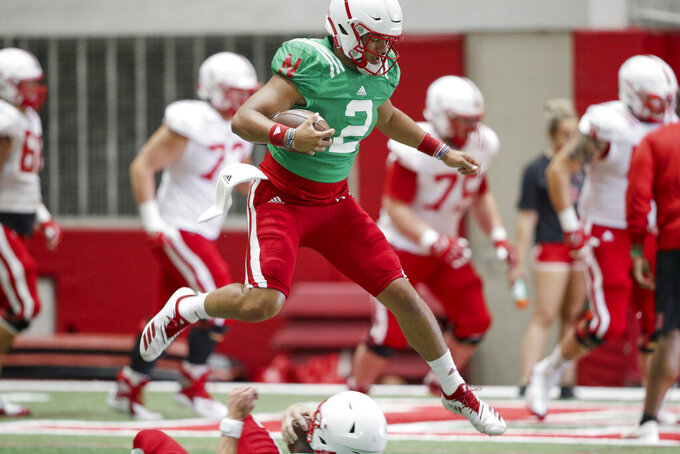 In this photo taken Aug. 7, 2019, Nebraska quarterback Adrian Martinez (2) leaps over a player during NCAA college football preseason practice in Lincoln, Neb. Martinez, the most productive freshman quarterback in the nation last season, averaged 371 yards of total offense against West Division opponents and 295 overall. He led an offense that ranked second in the Big Ten and scored 30 points per game. (AP Photo/Nati Harnik)

The power structure in the Big Ten could be in for a shakeup.

Jim Harbaugh enters his fifth year at Michigan overdue for a breakthrough, and two-time defending conference champion Ohio State is transitioning from Urban Meyer to Ryan Day and replacing a first-round NFL draft pick at quarterback.

Momentum Nebraska built the second half of last season is expected to carry over into Scott Frost's second year. Wisconsin ceded control of the West with five losses in 2018, and the division is considered wide open with six teams capable of making it to Indianapolis for the Big Ten title game.

Last year, Michigan was in position to win its first conference title since 2004 and make the College Football Playoff for the first time before embarrassing losses to Ohio State and Florida sent Harbaugh into the offseason looking for answers.

Harbaugh doesn't disagree with those who pick the Wolverines to win the East and the league.

"I think that's where I would pick us," he said.

"I feel like our team is in a really good place," he said. "Young, enthusiastic team with players with a lot of good experience. I feel really good about our coaching staff. I feel like it's good, it's tight, and we're proceeding on a daily basis to make it even tighter, even better."

Nebraska, coming off a 4-8 season, brings back one of the nation's most dynamic young quarterbacks in Adrian Martinez. Scoring has never been a problem for a Frost team, whether at Central Florida or Nebraska. The biggest question is whether the defense can improve on its No. 94 national ranking.

The Huskers benefit from a schedule that has them playing at home against Ohio State, defending West champion Northwestern, Wisconsin and Iowa.

"Nebraska is one of the teams that for a long time was one of the blue bloods of college football and winning as many game as anybody. That wasn't built overnight. It's not going to be built overnight again," Frost said. "I have a strong sense that we're way ahead of where we were a year ago, and I think we'll keep improving from here."

The Big Ten champion has not made the College Football Playoff since 2015, and the conference hasn't had a team included since a one-loss Ohio State got the nod over two-loss champion Penn State in 2016. Ohio State was passed over in 2018 because of a 29-point loss at Purdue and in 2017 because of a 31-point loss at Iowa. There's been chatter about realigning the Big Ten divisions to create greater competitive balance. East teams have won all five league titles since the East-West split, though it was two teams from the West that caused Ohio State to miss the playoff the last two years.

Ohio State DE Chase Young is looking to become the second Buckeye, and first since Mike Vrabel in 1994-95, to record double-digit sacks in multiple seasons. Penn State DE Yetur Gross-Matos is coming off a breakthrough season in which he had 20 tackles for loss. Michigan State LB Joe Bachie has made at least 100 tackles two straight seasons.

Northwestern won its first West title in 2018, came from behind to beat Utah in the Holiday Bowl and Pat Fitzgerald was named coach of the year. And once again, the Wildcats are picked middle-of-the-pack in the West.

"We're not great clickbait, I guess, so picking us first isn't real sexy," Fitzgerald said. "But we'll just earn it. ... We'll just continue to do that and control what we can control. But, yeah, it's always fun to read this time of year how we stink."