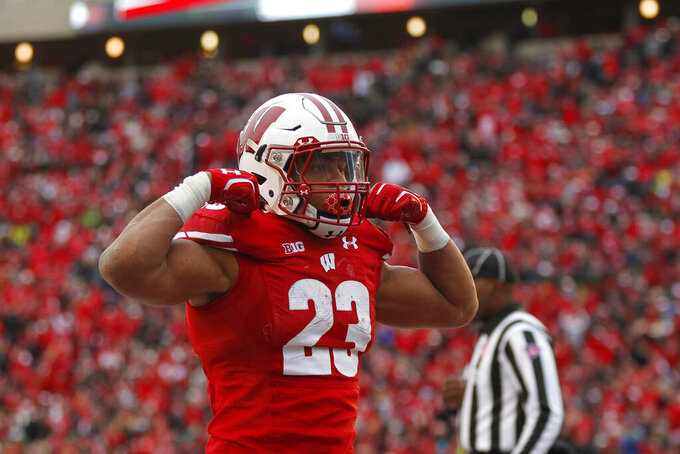 Except for South Carolina's stunning overtime win at Georgia, there haven't been many results so far this season that figure to shape the College Football Playoffs standings.

Expect that to change before Halloween.

There are a slew of scary matchups for playoff-hopeful teams in the next two weeks, headlined by a pair of Big Ten contests as Michigan heads to Penn State and Wisconsin travels to Ohio State.

Some of the games that should shake up the rankings between now and the end of October:

The Nittany Lions (6-0, 3-0 Big Ten) proved they were for real in winning at No. 23 Iowa 17-12 last weekend, while Michigan's biggest win also came against the Hawkeyes (10-3 two weeks ago). Penn State ranks second nationally in scoring defense at 8.2 points allowed per game, and the Wolverines (5-1, 3-1) scored just 24 points in their two games against ranked opponents Wisconsin and Iowa. A win over Penn State in Happy Valley could vault Michigan back into the playoff discussion and a Nittany Lions' victory would solidify their postseason resume.

The Sun Devils (5-1, 2-1 Pac-12) have won two in a row after a surprising home loss to Colorado. The Utes (5-1, 2-1) have beaten Washington State and Oregon State by a combined score of 90-20. The winner of Saturday's game in Salt Lake City will become the clear favorite to emerge from the Pac-12 South.

The undefeated Bears (6-0, 3-0 Big 12) might be the most surprising team in the country — although Texas Tech athletic director Kirby Hocutt said Big 12 officials acknowledged blowing an overtime call that helped Baylor get past the Red Raiders in double overtime. The Cowboys (4-2, 1-2) only lost by six at No. 15 Texas in September, and they knocked Kansas State out of the Top 25 the following week.

LSU (6-0, 2-0 SEC) has been arguably the best team in America so far this season. The Tigers have already knocked off Texas and Florida and have scored at least 42 points in every game. Auburn (5-1, 2-1) has lost once and it was at Florida, 24-13. Look for star LSU quarterback Joe Burrow to try and exploit an Auburn defense that is giving up 235 yards passing per game, 79th out of 130 teams nationally.

Provided each team gets to this matchup unscathed, it will be a must-see game. Wisconsin (6-0, 3-0 Big Ten) has four shutouts in six games, and Jonathan Taylor is surely on the Heisman Trophy shortlist with 825 yards rushing and a nation-leading 14 touchdowns. Ohio State (6-0, 3-0), behind star quarterback Justin Fields, leads the Big Ten with 49.3 points per game while allowing just 8.8 — fourth-best in the country.

Texas (4-2, 2-1) has had to recalibrate expectations after falling out of the playoff hunt because of losses to LSU and Oklahoma. But a repeat of last year, when they won a New Year's Six game over Georgia in the Sugar Bowl, is still on the table for the talented, banged-up Longhorns. TCU (3-2, 1-1) hasn't been itself of late, allowing 49 points in a blowout loss at Iowa State. But the Horned Frogs were in the playoff hunt until just before Halloween as recently as two years ago, and freshman quarterback Max Duggan has the makings of a future star.