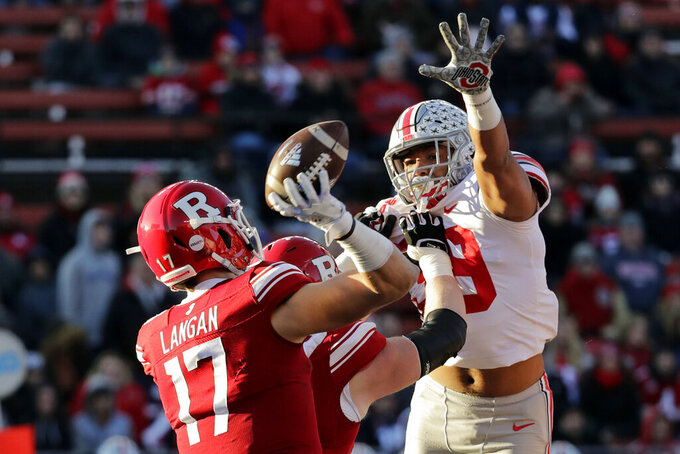 PISCATAWAY, N.J. (AP) — If Michigan State wants to go to a bowl, it is going to have to win its final two regular-season games.

“To me, it's always a bit about what are we going to do next,” said Spartans coach Mark Dantonio, who made clear this week he intends to coach again next year as his program struggles to stay among the Big Ten’s better teams. “Two crucial games coming up. When you look at what we've done in the past 12 years after the Michigan game, win or lose, big game with success or a game where we didn't have the success, we're a 10-2 football team. We have to look at that and try and build on that as we go forward. That's exactly what we'll do.”

The problem for Dantonio is his team is struggling and battling injuries. The Spartans (4-6, 2-5) are riding a five-game losing streak, their longest since dropping seven straight in 2016.

“We’ve got to win both to be able to make a bowl game. ... We’ve got to start by going 1-0 against Rutgers,” quarterback Brian Lewerke said.

The Scarlet Knights would seem to be an easy target. They have lost 19 straight Big Ten games and have only won three games the past two seasons (3-19).

However, Rutgers has played tough against Michigan State. The Spartans needed a late 22-yard touchdown run by Cody White to win 14-10 last season.

“I think they're a talented, physical team,” said Rutgers interim head coach Nunzio Campanile, who replaced Chris Ash in late September. “They obviously played a really tough schedule. It's hard to win games in this league. They beat Indiana, who is a really good team. They went right down to the wire there with Illinois. I think they're a pretty talented football team. Really hopefully we've made enough growth to be competitive and play hard and well.”

In his first season as a starter, Spartans junior linebacker Antjuan Simmons leads the team and is tied for third in the Big Ten with 14 tackles for loss. He also leads the team with 72 overall tackles and is tied for third with 3 1/2 sacks. He started the first eight games of the season on the weakside, but moved to middle linebacker the past two games.

Rutgers scored three touchdowns against No. 2 Ohio State last weekend. The Buckeyes had given up only eight TDs in their first nine games. A key was the return of halfback Isaih Pacheco. He scored on a 26-yard run and now has seven rushing TDs, the most by a Scarlet Knight in a season since Robert Martin had seven in 2014. The last to reach eight was Paul James, who had nine in 2013.

Michigan State defensive lineman Kenny Willekes, who led the conference in tackles for loss last season with 201/2, has been named one of three finalists for the Burlsworth Trophy. It is given annually to the most outstanding football player in America who began his career as a walk-on. Willekes ranks first among all FBS players with 1.22 tackles for loss per game and second with 45.0 career tackles for loss overall. He is second on the team this season with 10.0 tackles for loss, including a team-best 6.5 sacks.