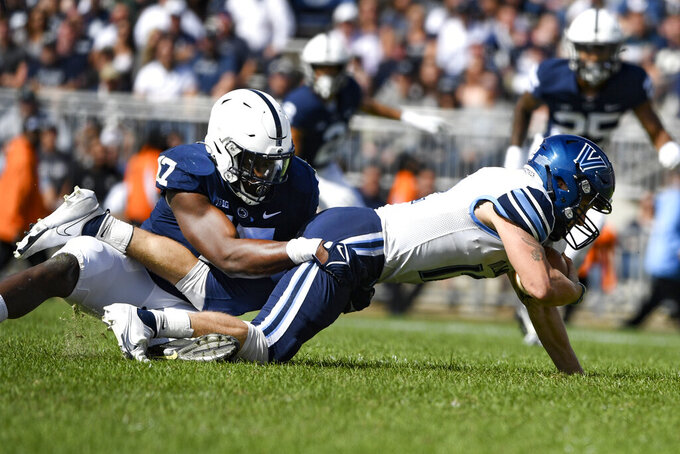 From its first snap of the season, Michigan State showed that coach Mel Tucker’s rebuilding project wouldn’t take nearly as long as expected.

Wake Forest transfer Kenneth Walker took a handoff, made a move around a defender and raced down the left sideline for a 75-yard touchdown against Northwestern.

Walker and Co. have shown how the relaxed NCAA guidelines allowing players to transfer without sitting out a season can make it easier to revitalize slumping programs.

“I knew coach (Tucker) had a plan, and I believed in his plan,” said Walker, who added that he wrote down his goal of winning the Heisman Trophy back in March.

Walker has rushed for 680 yards to lead all Football Bowl Subdivision players and help the 11th-ranked Spartans win their first five games, a dramatic rise from their 2-5 finish last year in the pandemic-delayed debut season for Tucker.

He isn’t the only transfer making a difference for the Spartans. And Michigan State isn’t the sole unbeaten Big Ten team to bounce back from a losing season while getting big contributions from players who began their college careers elsewhere.

The impact of the new transfer policy just happens to be most apparent in East Lansing. Michigan State is off to its fastest start since 2015, when it won its first eight games and reached the College Football Playoff.

Tucker overhauled his team during the offseason by adding 20 transfers, with 14 of them coming from other Power Five schools. He said before the season that his roster was stronger and more competitive and it would lead to better football.

No. 4 Penn State also has benefited from transfers while winning its first five games after going 4-5 a year ago.

“I felt like leaving Duke would give me more exposure,” Tangelo said. “I just felt like I needed a fresh start.”

No. 9 Michigan has turned things around after going 2-4 last year thanks in part to former Jackson State receiver Daylen Baldwin, who has touchdown catches of 56 and 69 yards.

Fields needed a waiver to play for Ohio State without sitting out a season, and Sermon could play immediately for the Buckeyes only because he was a graduate transfer. Those steps are no longer necessary now that the NCAA has ruled all athletes can transfer once without having to wait a year to play for their new teams.

“Everybody gets a hall pass,” Iowa coach Kirk Ferentz said. “Some people were getting them anyway before. Now everybody’s got one. At least they get one mulligan card in their pocket. We’ve played against a lot of transfers over the last four or five weeks, and we’ll see more this year.”

The policy change makes it much more tempting for schools to dip into the transfer portal when they need to restock their rosters.

Big Ten network analyst and former Indiana coach Gerry DiNardo could see the trend continuing, with teams making sure someone on their support staff has the specific role of viewing video to see which potential transfers could be ideal fits.

“There’s no rule against having as big a back room as you want,” said DiNardo, who also coached LSU and Vanderbilt. “As long as the athletic directors are willing to give coaches unlimited resources when it comes to personnel, this is going to keep going.”

The impact of transfers was evident from the first game of the season, when former North Carolina State linebacker Calvin Hart and former Rutgers quarterback Artur Sitkowski played key roles in Illinois’ victory over Nebraska.

That set the tone for the rest of the season. The Big Ten is getting plenty of big performances from guys who were playing at other programs just last year.

Minnesota linebacker Jack Gibbens (Abilene Christian) is the Gophers’ most prolific tackler. Purdue’s Jamari Brown, a cornerback for Kentucky last season, is tied for the team lead in pass breakups.

Of course, these new transfer policies can work both ways.

But that’s a tradeoff Big Ten programs are willing to make. They only need to look at the league standings to understand how this era of widespread transfers can benefit them.