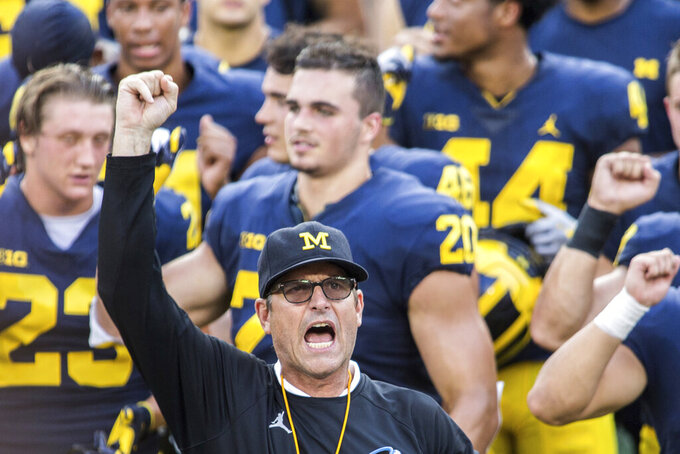 FILE - In this Aug. 26, 2018, file photo, Michigan head coach Jim Harbaugh leads his players and fans in singing "Hail to the Victors" after a practice session by the NCAA college football team at Michigan Stadium in Ann Arbor, Mich. Jim Harbaugh enters his sixth season as Michigan's coach with just two years left on his contract, adding another layer of interest in the 18th-ranked Wolverines as they kick off the season this week at No. 21 Minnesota.(AP Photo/Tony Ding, File)

Michigan starts head coach Jim Harbaugh's sixth year with a 47-18 record under the former Wolverines star quarterback, including 32-12 in the Big Ten and 0-5 against rival Ohio State plus a 1-4 mark in bowl games. Michigan's most recent of 42 conference titles came in 2004, the program's longest stretch without one. This pivotal season for Harbaugh opens in difficult fashion at Minnesota, albeit without tickets sold after the Big Ten delayed and reduced the schedule due to virus concerns. Minnesota won 11 games under third-year head coach P.J. Fleck last season, a total Michigan hasn't reached since 2011. The Gophers have lost 16 straight matchups with the Wolverines at home, last winning in 1977 at since-demolished Memorial Stadium. Minnesota last hoisted the Little Brown Jug trophy in 2014 after a 30-14 victory at Michigan Stadium.

Michigan QB Joe Milton vs. Minnesota DBs. Milton, a junior who played sparingly for the Wolverines the last two seasons, is on track to make his first career start. Two of Minnesota's secondary stalwarts from last year were NFL draft picks, Antoine Winfield Jr. and Chris Williamson, leaving Coney Durr, Jordan Howden and Benjamin St-Juste as the leaders of the group.

Michigan: DE Kwity Paye. One of three returning starters on the defensive line, Paye made the Big Ten's top 10 player list in the preseason media poll. He was sixth in the conference last year in tackles for loss.

Minnesota: RB Mohamed Ibrahim. With the departure of Rodney Smith, who finished second on the program's all-time rushing list, the junior Ibrahim becomes the featured runner. He led the Gophers with 1,160 rushing yards in 10 games in 2018 when Smith was injured.

Harbaugh and Fleck are the only current head coaches among the 65 power conference programs who both played and coached in the NFL. ... Michigan has won 41 of the last 45 games against Minnesota, losing only once per decade: 2014, 2005, 1986 and 1977. ... This is the first time that a Gophers team ranked in the AP poll faces another ranked opponent to start the season since 1968, when they played USC. ... The Wolverines have won 12 of their last 14 conference openers and are 48-4 in their first Big Ten game of the season since 1968.