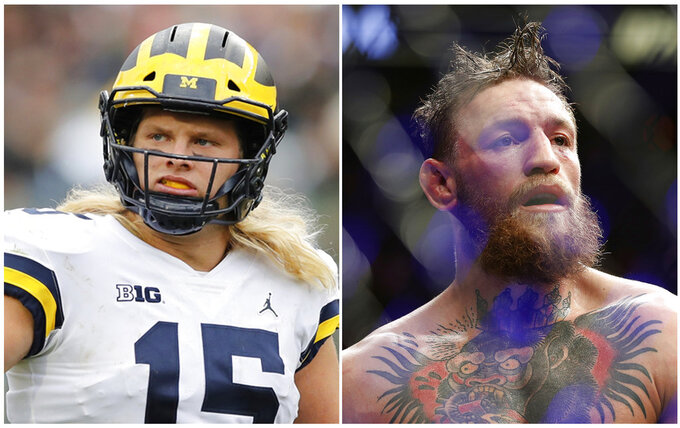 FILE - In this combination of 2018 file photos Michigan defensive lineman Chase Winovich, left, reacts after a play during the first half of an NCAA college football game against Michigan State , on Oct. 20, 2018, in East Lansing, Mich., and at right, Conor McGregor reacts after losing to Khabib Nurmagomedov in a lightweight title mixed martial arts bout at UFC 229 in Las Vegas, on Oct. 6, 2018. Winovich chose to stay in college to chase championships and improve his standing for the NFL draft. No. 5 Michigan has a path to a Big Ten title and the defensive end appears to be improving his stock for the pros. Winovich is also having a lot of fun along the way and is trying to live life like UFC star McGregor, who he calls a big brother. (AP Photo/Files)

ANN ARBOR, Mich. (AP) — Chase Winovich chose to stay in college to pursue championships and improve his standing for the NFL draft.

No. 5 Michigan seems to have a clear path to a Big Ten title and perhaps the College Football Playoff. And the defensive end appears to be improving his stock among pro scouts.

The fifth-year senior also is having a lot of fun along the way, trying to live his life like UFC superstar Conor McGregor, whom he has befriended.

"Conor and I have somewhat of a relationship now," Winovich said Monday. "I met him in New York City. I've FaceTimed him twice. He follows me on Twitter. It's a pretty cool deal. He's a big brother of mine."

Like McGregor, Winovich has a way with words and an ability to make headlines and stir things up on social media. He's doing it again leading into Saturday's game at home against No. 14 Penn State.

The Nittany Lions are one of four Big Ten teams that beat the Wolverines in 2017, making their game a stop on what Winovich has called a "revenge tour" this season.

"We knew we had revenge to give out on the people who were kind of bullying us, I'd say, just beating up on us last year," Winovich said. "They kind of took advantage. We were kind of in an in-between year and something about that gave me a bad taste in my mouth.

"I knew me, personally, I wanted our lunch money back and I wanted them to pay interest."

"That's a baited question," he said with a grin. "I can't give that to Penn State."

The Nittany Lions likely wish Winovich, who is from Jefferson Hills, Pennsylvania, was giving them the every-snap energy he provides for one of the nation's best defenses. The Wolverines rank No. 1 in college football in total defense, giving up just 220 yards a game, and pass defense, allowing 122.9 yards per game.

The 6-foot-3, 253-pound Winovich has a team-high 11 tackles for loss and is third on the team with 43 tackles even though teams often run away from him. He may have had his best game against the team that has proven to be the best, No. 3 Notre Dame, which gave up three tackles for loss to him and a total of eight tackles in a seven-point win over the Wolverines.

Winovich is regarded as the top player on Michigan's defense, getting named Big Ten Defensive Player of the Year midway through the season by The Associated Press and being the conference's only defensive player on the AP's midseason All-America team . He's also a semifinalist for the Bednarik Award, which recognizes college football's top defensive player.

"He sure has been having an impressive season," Michigan coach Jim Harbaugh said. "All ways that a defensive end can affect a game, he has found ways to do that, getting pressure on a quarterback or tackling from the backside or the frontside, hustles constantly, tipped balls."

Harbaugh also likes Winovich's style, which includes letting his blond hair flow from out his helmet and sharing his thoughts relatively unfiltered.

"He does everything at such an intense level, hard-working level, and he's gung ho as he's doing it," Harbaugh said. "It seems to be a rarer trait in individuals these days. Sometimes, younger people thinking it's more cool to have an approach that they're too cool for school as opposed to gung ho.

"Chase is definitely a throwback in my mind in the area of attacking every day with an enthusiasm unknown to mankind, which I have great respect for."