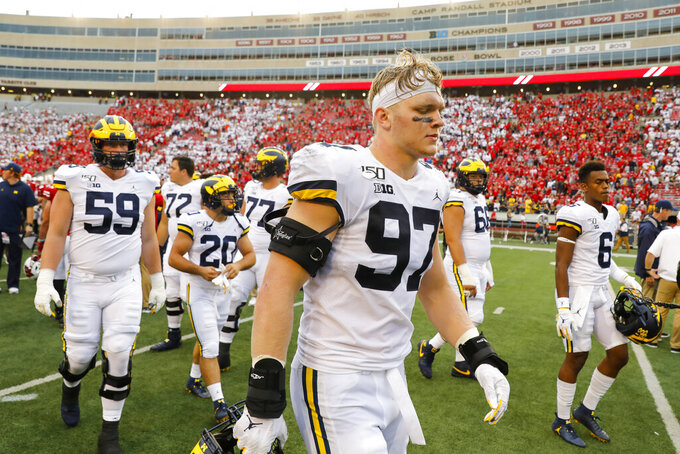 Michigan defensive lineman Aidan Hutchinson walks off the field with his teammates after losing 35-14 to Wisconsin in an NCAA college football game Saturday, Sept. 21, 2019, in Madison, Wis. (AP Photo/Andy Manis)

The Wolverines came into their fifth season under Jim Harbaugh looking like a good bet to win the Big Ten. A spot in the College Football Playoff seemed like a real possibility, and the program's first national championship since 1997 even appeared within reach.

The odds are looking about as long as one of Jonathan Taylor's dashes for Wisconsin after the Badgers ran over the Wolverines 35-14 on Saturday.

Michigan, which dropped nine spots to No. 20 following the loss, will try to regroup when it hosts Rutgers next week. Then comes what figures to be a tough matchup against No. 14 Iowa at the Big House on Oct. 5.

As for the Wisconsin game? Well, it stung.

Michigan was outgained 487 yards to 299 and got dominated on the ground 359-40. The Wolverines lost two fumbles, threw two interceptions and a made a quarterback change, with Shea Patterson getting benched late in the first half in favor of Dylan McCaffrey. Patterson returned near the end of the third quarter after McCaffrey suffered a concussion on a shoulder-to-helmet hit by Wisconsin safety Reggie Pearson.

That was just another rough turn in a game that got away early.

Taylor had 143 yards and two scores, including a 72-yarder, in the first quarter. Coan dived in from the 1 midway through the second and scrambled 25 yards for another touchdown with about a minute left in the half to make it 28-0. The lead got to 35-0 in the third before Michigan scored the first two touchdowns against Wisconsin this season.

"It's a gut check, for sure," Harbaugh said.

Coming off its third 10-win season in four years under Harbaugh, Michigan appeared to be set for success this season. The Wolverines had Patterson and seven other starters returning on offense as well as a bunch on defense, not to mention a favorable schedule. Rivalry games against Notre Dame, Michigan State and Ohio State all will be in the Big House.

But so far, the Wolverines haven't lived up to their billing. They opened with a lackluster 40-21 win over Middle Tennessee and needed double overtime to beat Army two weeks ago.

The loss to Wisconsin, which jumped five spots to No. 8, will only fuel critics who believe Harbaugh can't win the big one. Michigan is 1-6 on the road against Top 25 teams under him and has lost bowl games the past three years after winning the Citrus Bowl in his first season.

"As a group, we don't have an identity yet," tight end Nick Eubanks said. "We've got a game coming up next week. We've got to find it quick. It's a long season. It's a gut check. We need to find a rhythm on offense. It's not as consistent as we hoped it would be. Through the next few weeks, the next few practices, we will find our rhythm."

There's plenty to fix on both sides.

It's fair to say that rushing just 19 times, going 0 for 10 on third downs and getting dominated in time of possession (41:07-18:53) against Wisconsin wasn't the plan for Michigan. The offense continued to struggle under new offensive coordinator Josh Gattis.

The Wolverines lost two fumbles against Middle Tennessee, leading to a pair of touchdowns. Michigan would have lost to Army a week later had Black Knights kicker Cole Talley made a 50-yard field that was just short and to the right at the end of regulation. Jake Moody hit a 43-yarder in the second overtime, and the Wolverines forced and recovered a fumble to win that game.

Against Wisconsin, things quickly got out of hand. But Metellus wasn't ready to give up on the season.