Midterms! Who's hot so far in college football, CFP forecast 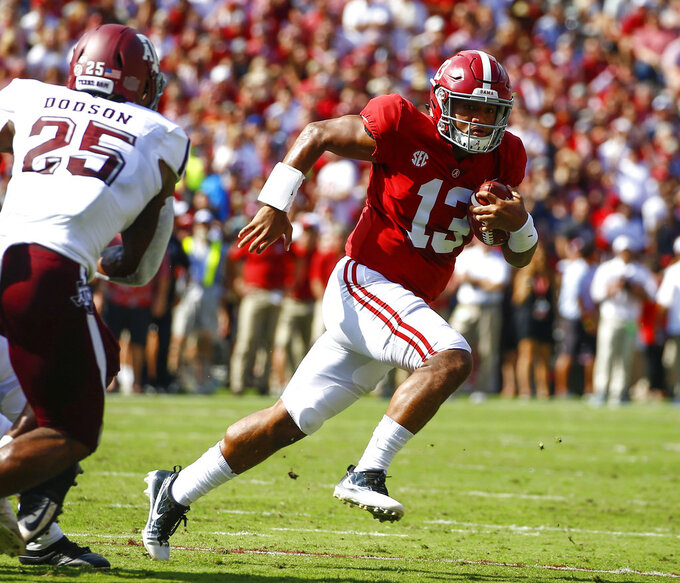 FILE - In this Sept. 22, 2018, file photo, Alabama quarterback Tua Tagovailoa (13) scrambles for a first down against Texas A&M during the first half of an NCAA college football game, in Tuscaloosa, Ala. Tagovailoa was named to The Associated Press Midseason All-America NCAA college football team, Tuesday, Oct. 16, 2018. (AP Photo/Butch Dill, File)

The midpoint of another season has arrived and the burning question is — yet again — can anybody beat Alabama?

This is the third straight year the Crimson Tide has started the season No. 1 and ripped through its first seven games with little resistance. In 2016, the Tide outscored its first seven opponents 318-105, spent the entire regular season at No. 1 and did not lose until the national championship game against Clemson

Last year, Alabama outscored everyone 299-71 through seven games and did not stumble until the regular-season finale at Auburn, which the CFP selection committee excused and the Tide went on to win its fifth national championship under coach Nick Saban.

This year, Alabama is 7-0 by a margin of 375-106. Granted, part of this first-half dominance is because the Crimson Tide's early season schedule always contains at least two nonconference pushovers, and its typically toughest Southeastern Conference games against LSU and Auburn are always in November.

But here we are again, halfway home waiting to see if and when the machine in Tuscaloosa will malfunction.

Time to put a capper on the first half, acknowledging the good and bad, and forecast what's to come.

The NCAA passer rating might not be the best way to measure how well a quarterback is playing, but it does provide a consistent data point that's been used for a long time. Last year, Baker Mayfield set an NCAA record for rating in a season at 198.9 on the way to the Heisman Trophy. Look back at the statistics over the years and you will find that good quarterbacks have good ratings. It's not a bad tool, even if it is not perfect.

Tagovailoa currently leads the country in passer rating at 248.09. He has thrown 21 touchdowns, no interceptions and is averaging 14.3 yards per pass. Even accounting for inflation because of competition — and Alabama's schedule is really not that bad relative to other top teams — the sophomore has delivered on every bit of his hype.

If you thought Oliver might cruise through his junior season, having already declared that he will enter next year's NFL draft, not a chance. Despite drawing loads of attention from opposing blockers , Oliver is putting up almost two tackles for loss per game (third in the nation). If advance measurements are your thing, Oliver has graded out as one of the best defensive players in the country , according to Pro Football Focus. There is also a cool bobblehead doll version of Oliver riding his horse, Oreo.

Coach Jeff Brohm swiped Moore away from Texas in recruiting and the 5-foot-9, 175-pound do-it-all receiver has thrived in the Boilermakers' big-play attack. He is fourth in the country in all-purpose yards (167.8 per game) and is averaging 13.8 yards every time he touches the ball. He has four 100-yard receiving games and has packed a season's worth of highlights into six games.

The Tigers were preseason No. 25, but it seemed even their fans were not quite convinced this would be a successful season. Now they are thinking playoff after LSU walloped Georgia last weekend. The offense still lacks explosiveness, but it has limited mistakes. The defense is stout, relying on a trio of midseason All-Americans in cornerback Greedy Williams, safety Grant Delpit and linebacker Devin White. The Tigers might have already peaked, but only a second-half collapse will keep them from exceeding expectations.

The SEC West's other Tigers are in a tailspin. The defending division champions were ranked ninth in the preseason and kicked things off by beating Washington. Auburn's offense seems to get worse every week, which is especially problematic when that is your head coach's thing — and that head coach is one year into a $49 million contract . The Tigers can't run behind a faulty line and quarterback Jarrett Stidham, touted as a potential first-round NFL draft pick, is 86th in the country in passer rating (126.76). Getting to 7-5 will take serious work.

COACH OF THE HALF SEASON

The fourth-ranked Fighting Irish had to replace the key components of last season's run-heavy offense and their defensive coordinator. Kelly confidently turned a veteran defensive over to 36-year-old assistant Clark Lea to replace Mike Elko, who left after one season to join Texas A&M. The Irish leaned on the defense early. Needing to spark offensively, Kelly handed the offense over to quarterback Ian Book after three games and he delivered a more dynamic attack. Notre Dame heads into the second half a serious playoff contender.

We know what you're thinking: For $75 million over 10 years the least Fisher can be is promising. But considering all the highly touted coaches who have flopped in year one, give credit to Fisher for having the Aggies looking ahead of schedule. He has gotten good play out of quarterback Kellen Mond, who was recruited to play in a very different system, and a defense that has been flimsy for years is suddenly stingy.

At the risk of being a jinx, this looks as if it could be a relatively quiet silly season:

Trouble's been building for a while: Paul Johnson, Georgia Tech.

MOST INTERESTING TEAM OF THE SECOND HALF

Consider, for a moment, Jim Harbaugh coaching Michigan to the College Football Playoff. Now consider another Michigan season being derailed by losses to rivals Michigan State and Ohio State. Either seems possible and highly entertaining.

Seems like Tagovailoa's award to lose, but he has plenty of opportunities to do just that and there are contenders such as Haskins and Murray primed to pounce. Keep an eye on Oregon quarterback Justin Herbert, Michigan quarterback Shea Patterson, Clemson running back Travis Etienne and Houston defensive tackle Ed Oliver as potential visitors to New York.

And the winner is ... Tagovailoa becomes the third Alabama player, and first Tide quarterback, to win the Heisman in the last 10 years.

Orange Bowl semifinal — No. 1 Alabama vs. No. 4 Oklahoma.

Cotton Bowl semifinal — No. 2 Clemson vs. No. 3 Michigan.