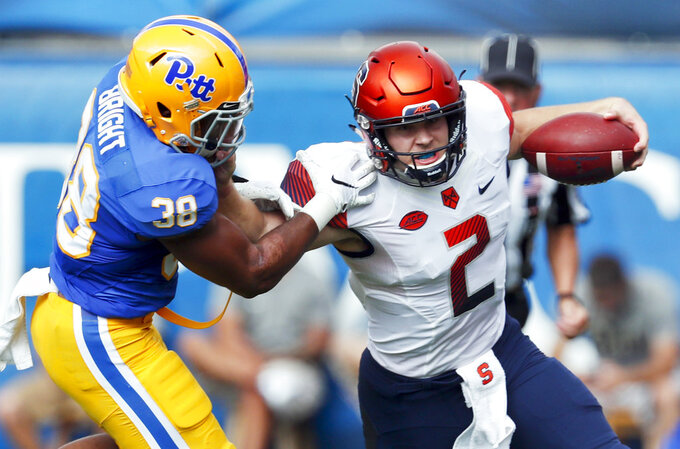 FILE - In this Saturday, Oct. 6, 2018, file photo, Syracuse quarterback Eric Dungey (2) scrambles for a first down as Pittsburgh linebacker Cam Bright (38) pursues in the first quarter of an NCAA football game in Pittsburgh. What makes Syracuse a dangerous team is senior quarterback Eric Dungey. He’s responsible for 17 points per game (seven rushing TDs and 10 passing), which leads the ACC. (AP Photo/Keith Srakocic, File) 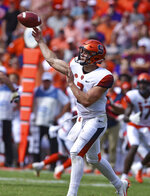 SYRACUSE, N.Y. (AP) — Halfway through his third season at Syracuse, coach Dino Babers is closer to that magic number of six wins than he's ever been at this juncture with the Orange.

Despite a two-game losing streak — to Atlantic Coast Conference foes Clemson and Pittsburgh (in overtime) — Syracuse (4-2, 1-2 ACC) has demonstrated its strides as it enjoys a bye week at the right time.

"I think the first half of the season has had its ups and downs, but I'm not down on this football team," Babers said. "I mean, you can pick and choose your moments, but you're talking about a 4-2 football team. Both the games they lost they were winning in the fourth quarter. Now, that part is disappointing."

The Orange are on a bye week and will resume play next week at home against North Carolina (1-1, 1-3). The break comes at a good time, with hard-hitting safety Antwan Cordy and tight end Ravian Pierce nursing injuries.

"The main thing we need to do during this break is we just have to get healthy," Babers said. "The guys that do play play a lot and you've got to let them get their nicks and bumps healed if you're going to have an opportunity to finish the season strong."

November has been the team's Achilles heel of late. Quarterback Eric Dungey has missed the final three games in each of the last three seasons and the Orange have won just one of 12 November games in that span.

One problem has manifested itself in the two losses so far this year — the defense hasn't been able to stop the run despite its stout front four of Chris Slayton, Alton Robinson, Kendall Coleman, and McKinley Williams. The Orange are tied for the national lead with Clemson and Miami at 3.33 sacks per game and their nine interceptions are tied for the fourth-most in the country, but Syracuse was torched for 568 yards rushing in the two losses and had four turnovers combined — three against Pitt.

"In the two losses, the takeaways were the key," Babers said. "We were majorly plus in the turnover categories in the four wins. If we can find a way to stay plus one or plus two, I think our season will end on a happy note. I think the turnovers and rushing defense and rushing offense is the key to winning football games."

There's also a noticeable difference so far this year on offense. In the first two seasons under Babers, the Orange had breakout performances from three wideouts — graduate transfer Amba Etta-Tawo, Ervin Philips and Steve Ishmael. Etta-Tawo set school records with 94 catches for 1,482 yards and 14 TDs in his only season (2016), then last year Ishmael caught 105 passes for 1,347 yards and Philips had 89 catches for 904 yards.

Babers expected the trend to continue. It hasn't yet. He's still waiting for somebody to emerge as that go-to guy.

Jamal Custis , who put in some intense work in the offseason to improve his catching skills, leads the team with 25 catches for 430 yards and three TDs, while Sean Riley has 26 receptions for just 246 and two scores. Sophomore Nykeim Johnson (17 for 218) and freshman Taj Harris (10 for 189) have been the other prime targets.

Dungey, who missed the second half of the win over Florida State with blurred vision caused by a fragment of astroturf, is averaging 201.3 yards passing per game. That's a considerable drop-off from 2016 (297.7) and last year (277.2). He remains a threat on the ground (435 yards and seven TDs) and rushed for 200 yards, a school record for a quarterback, in the season opener at Western Michigan.

When asked this week about the chemistry between Dungey and his receivers, Babers declined to comment.