Mike Bobo steps down as football coach at Colorado State 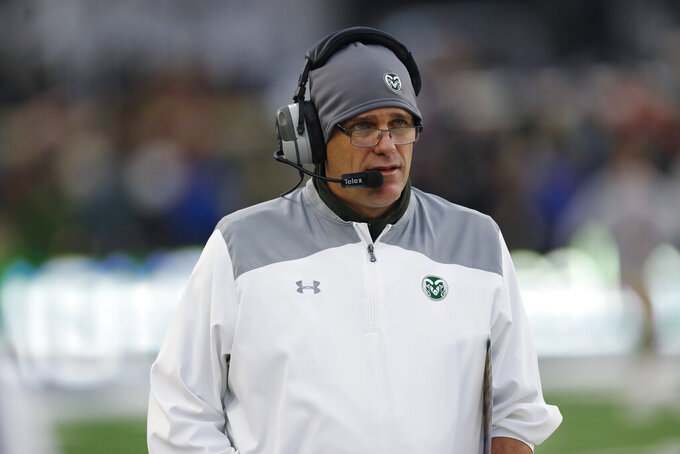 In this Friday, Nov. 29, 2019, photograph, Colorado State head coach Mike Bobo walks the sidelines in the second half of an NCAA college football game against Boise State in Fort Collins, Colo. Boise State won 31-24. Bobo was relieved of his duties Wednesday, Dec. 4, 2019, after five years on the job. (AP Photo/David Zalubowski)

Mike Bobo has agreed to step down as football coach at Colorado State after a second straight losing season.

The move was announced Wednesday by athletic director Joe Parker.

Bobo went 28-35 during his five seasons in Fort Collins. The Rams made the move five days after a 31-24 loss to No. 19 Boise State to conclude the season.

As part of his separation agreement, Bobo will receive $1.8 million to be doled out in three payments. His contract was scheduled to run through the 2022 season.

Bobo's tenure at Colorado State started fast as he led the Rams to three straight bowl games. But the Rams went 7-17 the past two seasons.

Bobo was 2-13 against rivals Colorado, Air Force and Wyoming.

"Unfortunately, the results the last couple of seasons have not been what we wanted," Bobo said in a statement. "I can assure you this was not a reflection of the commitment and hard work that we all put into the program the last five years. Our players and coaches never quit and fought through the final whistle against Boise State. I am so proud of this entire team and staff for their incredible resolve."

"I would like to thank Mike Bobo for his professionalism, commitment and efforts in leading our football program for the past five seasons,” Parker said. “He has devoted an innumerable amount of energy to moving Colorado State football forward and fulfilled his promises to developing our student-athletes in every dimension. ... We wish Mike well in all his future endeavors. He will always be a Stalwart Ram.”

This season, the Rams dropped five of their first six games. They won three in a row before losing their final three.

The 2018 campaign was a difficult one for Bobo on and off the field. He was hospitalized for peripheral neuropathy after experiencing numbness in his feet. It made walking the sideline difficult for him that season. After finishing 3-9, Bobo was due a $100,000 pay increase. Instead, he turned it down to demonstrate accountability to his players.

"I had a lot of people saying, 'What are you doing?'" Bobo recounted. "But it wasn't about the reaction from other people or the fan base or the media. It was really meant for my team."

Bobo was hired before the 2015 season to replace Jim McElwain. Bobo arrived from the University of Georgia, where he was a quarterback for the Bulldogs during his playing days before rising through the ranks to become the team's offensive coordinator in 2007.

While at Georgia, he mentored several prominent quarterbacks such as Aaron Murray and Matthew Stafford.

The Rams were frequent bowl participants early on under Bobo, going to the Arizona Bowl, Famous Idaho Potato Bowl and the New Mexico Bowl. They lost all three.

Just before the New Mexico Bowl in 2017, the Rams extended his contract through the 2022 season. He made $1.8 million in 2018, with increases of $100,000 each season through '22. He also received bonuses based on the team reaching certain performance goals.

The crowd last week against a ranked Boise State squad was announced at 12,324 on a chilly and overcast day. The middle sections of the stadium were pretty much the only seats open following a blizzard earlier in the week that dropped around 15 inches of snow.

The Rams produced numerous pro prospects in Bobo's time, including receivers such as Michael Gallup (now with the Dallas Cowboys) and Preston Williams (Miami Dolphins).

"I love coach Bobo and really appreciate him," receiver Warren Jackson said after the loss to Boise State. “You can see how we play that we do really love him.”

By Paul Newberry 2 minutes ago
21 minutes ago
By Steve Megargee an hour ago
2 hrs ago
By Ralph D. Russo 2 hrs ago