Minnesota's seasoned line in peak form with Maryland up next 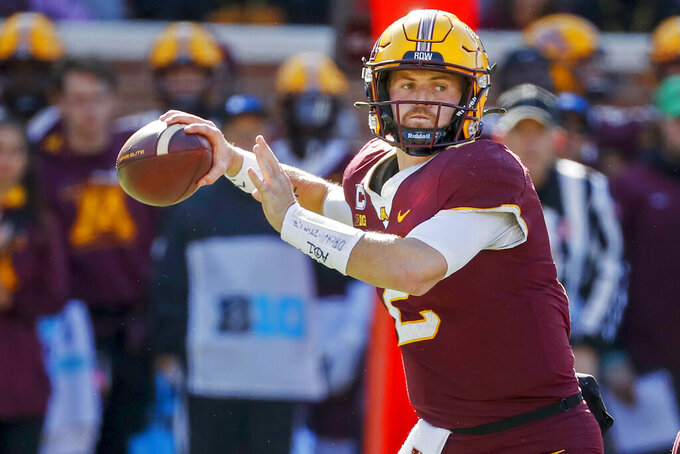 MINNEAPOLIS (AP) — Most of Minnesota's regular offensive linemen might have expected to be done with college by now, with five of them in their fifth year or more.

The guys up front for the Gophers have found a groove at just the right time, as several of them enter the final stretch of their unglamorous, unforgettable experience as blockers in the Big Ten.

When Minnesota beat Nebraska last week, a well-rounded performance by the offensive line made a big impact. Tanner Morgan passed for a season-high 209 yards and was sacked only once. Bryce Williams, in the lead tailback role after season-ending injuries to Mohamed Ibrahim and Trey Potts, rushed 17 times for 127 yards.

“Protection was phenomenal, and we did a phenomenal job in the run game as well,” Morgan said. “It was a very clean and a very efficient game up front.”

Center John Michael Schmitz is in his fifth year, as is tackle Blaise Andries and backup Axel Ruschmeyer. The elders are tackle Sam Schlueter and left guard Conner Olson, fast friends since they were freshmen roommates and now in their sixth seasons together.

The extra year of eligibility granted by the NCAA for the COVID-19 interruption made the collective decision easy for Schlueter and Olson to return along with the rest of the crew that dates to coach P.J. Fleck's first year in 2017.

“It's great to see how much we've grown, how much I've grown,” Schlueter said. “We've kind of just done that together.”

Schlueter has taken over at left tackle, moving Andries to the right side, where he started at tackle ahead of Daniel Faalele against the Huskers. Nathan Boe got his first start at guard, the spot vacated when Curtis Dunlap Jr. entered the transfer portal.

The group is deep enough that the Gophers routinely use seven linemen in a game. Ruschmeyer delivered a critical pancake block on a Nebraska linebacker to spring a 56-yard touchdown run by Williams.

Minnesota (4-2, 2-1 Big Ten) hosts Maryland (4-2, 1-2) on Saturday, with the Terrapins trying to brush off lopsided losses to Iowa (51-14) and Ohio State (66-17) before their well-timed bye last week. They lost wide receivers Dontay Demus and Jeshaun Jones to season-ending injuries in those games.

Maryland beat Minnesota 45-44 in overtime last year at home. Much like this week, the Terps entered that game trying to recover from a blowout loss. They were beaten by Northwestern 43-3 in their opener.

“That was a very special night for us as a team,” quarterback Taulia Tagovailoa said. “Just bouncing back, and it was a close game. I was just happy that we got the win, and coming back from a loss like that, showing that we’re not the same Maryland that we’ve been before.”

The front four has keyed a significant improvement this season by Minnesota's defense, boosted by Clemson transfer Nyles Pinckney at defensive tackle and fueled by the pass rushing skill of defensive end Boye Mafe, who's tied for the Big Ten lead with five sacks. This is the deepest defensive line the Gophers have had in five years under Fleck.

“They’ve been through a lot together, and I think the more you’ve been through as a position group or a unit or as a team, the better you can be," Fleck said. "It doesn’t promise you’re going to better, but it gives you the better chance to be because that failing and that adversity and that muck and that grind, that’s part of becoming really successful.”

With Williams and freshmen Mar'Keise Irving and Ky Thomas seeing their playing time increase for the Gophers without Ibrahim and Potts, sophomore Cam Wiley has decided to transfer. The Gophers are down to three healthy scholarship running backs with the departure of the Las Vegas native.

“The portal is designed for the young players to have opportunities that fit them really well, whether they stay or whether they go, and everybody has a different personal situation," Fleck said. “I support it 100%. I’m going to miss him. He’s a really good person.”

The injuries have left Rakim Jarrett as Maryland's best remaining wide receiver. The sophomore has 22 catches for 319 yards and a team-leading five touchdowns this season. He's also now the primary kickoff returner.

“He’s no longer the little brother in the room,” coach Mike Locksley said.