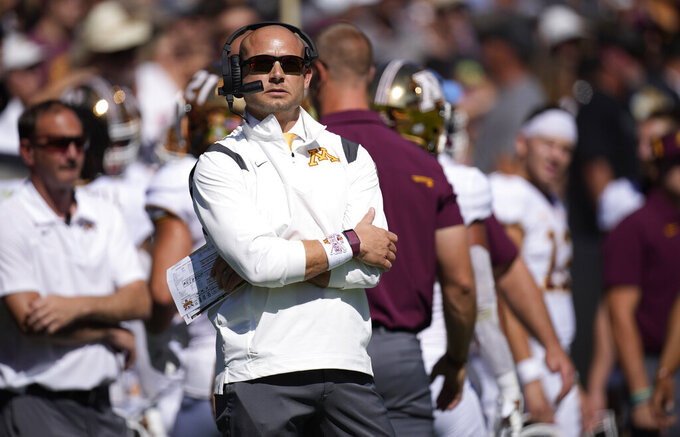 MINNEAPOLIS (AP) — After a troubling amount of long-gain lapses in the first two games of the season following a rough 2020, Minnesota's defense needed a change in mindset.

The message was simple: “We needed to go out there and have fun,” coach P.J. Fleck said.

There hardly could have been a more satisfying experience for the Gophers than last weekend, with a shutout on the road against a power conference foe — the first time all those boxes were checked since a victory at Illinois in 1977.

The meager net yards total (63) mustered by Colorado was the lowest by any FBS team in the last four years. Only twice in program history has Minnesota surrendered less than that.

“All three levels, just being super detailed in their assignments and then playing physical and flying to the ball. I felt like we tackled really well,” linebacker Jack Gibbens said, reflecting on the 30-0 victory that stretched Minnesota's nonconference winning streak to 21 games in a row that's by far the longest active run in the FBS.

“It was definitely a lot of pride,” cornerback Coney Durr said. “I feel like once we got to the third quarter, we kind of had a feeling that we could shut them out.”

The Gophers (2-1) have turned their attention to Bowling Green (1-2), the opponent for their homecoming game on Saturday. They're 31-point favorites, according to FanDuel Sportsbook.

“We’re super excited about the way that we played last week, but that has no bearing on how we play next week,” said Gibbens, emphasizing the Fleck-driven mantra that momentum doesn't matter. “Just because we had a good week last week, that doesn’t promise anything next week.”

After going without a sack in their first two games, the Gophers broke through with their pass rush. Defensive ends Boye Mafe, the fifth-year standout, and the aptly named Thomas Rush each had two sacks at Colorado. Rush, who's in his fourth season with the program, was moved up last year from linebacker and is still getting his feet set at the new spot.

“The more he plays it the better he's going to be,” Fleck said.

Even with an established quarterback in Tanner Morgan, the Gophers have only attempted 17 passes in each of the last two games. They're more than content to keep the ball on the ground, behind their massive and experienced offensive line, when they have the lead.

The return of wide receiver Chris Autman-Bell from an ankle injury that kept him out of the first two games can only help increase their productivity through the air. Transfer Dylan Wright has stood out as a go-to target early, and the Gophers are counting on continued development from sophomore Daniel Jackson.

“This is about a learning experience. The minute that play is over, ‘What did I learn? What did I gather?’” Fleck said. “Boom, got it, next play, let’s go. That’s with young players in general. The faster they can get better at that, the better they’re going to be.”

Minnesota's nonconference winning streak, which includes bowl games, is the longest by a Big Ten team since Purdue (24) from 1926-33. The last time the Gophers lost to a nonconference team was Sept. 3, 2015, to then-second-ranked TCU.

Bowling Green accounts for one of the four losses Minnesota has taken in 38 all-time matchups with Mid-American Conference teams, a 32-31 victory in coach Tim Brewster's first game with the Gophers on Sept. 1, 2007. The Falcons took a 21-0 lead midway through the third quarter that night at the Metrodome before the Gophers rallied to force overtime.

Bowling Green is 8-20 all-time against current members of the Big Ten, including a 3-0 mark against Purdue and a 2-1 record against Northwestern. The Falcons are scheduled to play at Michigan in 2023, at Penn State in 2024, at Minnesota in 2025 and at Ohio State in 2027.

Gophers fans traveled to Colorado in droves, making Folsom Field at times sound like a home game for the maroon and gold. The crowds at Huntington Bank Stadium have been strong so far, a sellout for the opening loss to Ohio State and an announced 43,372 attendees for the win against Miami of Ohio the following week.

“Just so proud of the way they travel, the loyalty they continue to show,” Fleck said. “It’s so positive for our players to continue to see.”