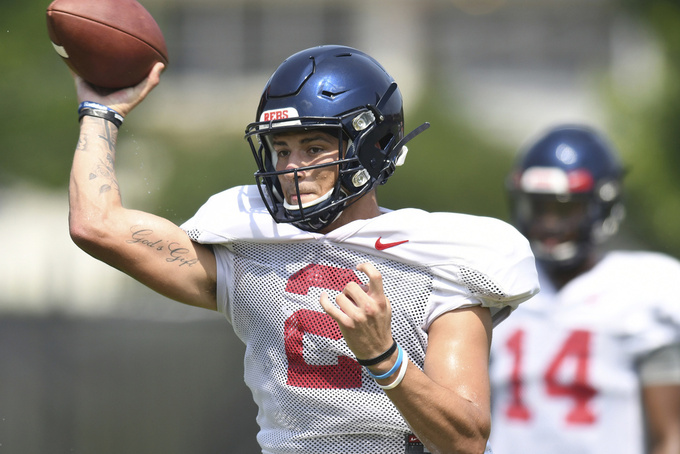 OXFORD, Miss. (AP) — Mississippi coach Matt Luke is thrilled to have a full scholarship allotment and the opportunity to qualify for a bowl after a two-year postseason ban because of NCAA rules violations.

Now the Rebels need their bounty of young players to quickly improve if they want to reach six wins.

Optimism abounds, even if experience doesn't, especially on the offensive side of the ball.

"We have all these young guys, but we have bodies," Luke said. "It'll be the first time being back at that 85 scholarship number. There's going to be competition at every single position and that's why those guys came here; for that opportunity to play."

Ole Miss will have a much different look this season after Luke hired two new coordinators — Rich Rodriguez on offense and Mike MacIntyre on defense. The Rebels hope the veteran coaches can make a quick impact and help the program improve on its 5-7 record from a year ago, including a 1-7 mark in the Southeastern Conference.

Rodriguez — who has been the head coach at Arizona, Michigan and West Virginia — said the team's preseason will be a challenge.

"We've got to do our job as coaches to get them prepared mentally and physically and also get them to mature more quickly than normal," Rodriguez said. "We have an aggressive install, probably more aggressive than anywhere I've been. I want to see what they can handle."

Ole Miss will turn to Matt Corral under center. The 6-foot-1, 205-pound redshirt freshman played in four games last season, completing 16 of 22 passes for 239 yards, two touchdowns and an interception. He also ran for two touchdowns.

Corral said his four-game cameo last season should help him be better than a normal freshman.

"Just being comfortable with the system and playing within the system," Corral said. "Don't let the moment get too big for you because it's never too big."

The Rebels' defense returns 10 starters, but was one of the worst in the league last season, giving up more than 36 points per game. MacIntyre is installing a new 3-4 system with three linemen and four linebackers. The group is led by senior defensive linemen like Benito Jones and Josiah Coatney, along with junior linebacker Mohamed Sanogo.

"We got a bunch of guys on that side of the ball that have played a lot," Luke said. "And quite frankly, they are tired of hearing about how bad they are."

Here are a few more things to watch as Ole Miss prepares for its Aug. 31 season opener at Memphis:

One of the team's surprise standouts last season was Scottie Phillips, who ran for 928 yards and 12 touchdowns while averaging 6.1 yards per game. He'll be even more important in an offense that's expected to be a little more balanced this fall.

The Rebels' quest for six wins might be decided in the first few weeks when they face Memphis and Arkansas. Ole Miss almost certainly has to split those games if it wants to have a realistic shot at the postseason. Two wins would put them in a very good spot.

Ole Miss has struggled at linebacker over the past few seasons, but this fall it might be the strength of the defense. Sanogo returns after leading the team with 112 tackles. The Rebels also hope that newcomers like Sam Williams and Lakia Henry make a quick impact.

The Ole Miss recruiting class received a big boost when Jerrion Ealy decided to play football instead of professional baseball. The 5-foot-10, 200-pound freshman running back could be a versatile playmaker for the Rebels right away.

The Ole Miss coach took the job in a tough situation, just days after Hugh Freeze resigned in the wake of stunning personal scandal . Luke did a good job of keeping the program from hitting rock-bottom during NCAA sanctions. Now in his third year, he needs to show that the Rebels are heading in the right direction.