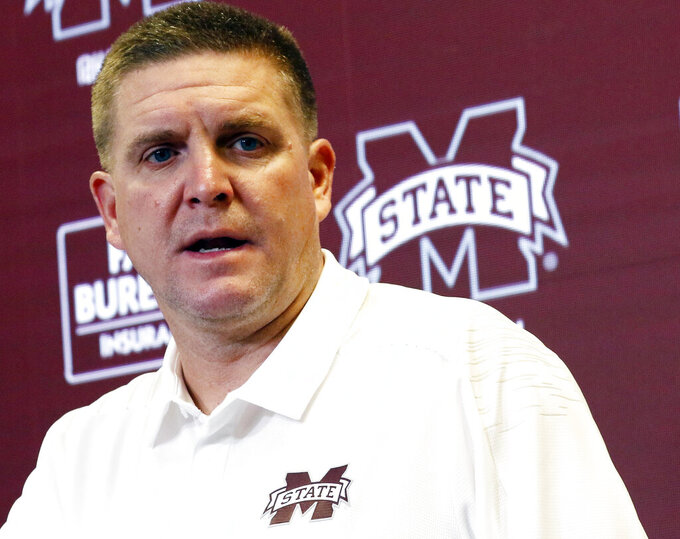 Shoop was Tennessee's defensive coordinator in 2016-17, the final two years of Butch Jones' coaching tenure. Shoop's son, Jay, is a walk-on defensive back for Tennessee.

Shoop, who is in his second year on Mississippi State's staff, coached several current members of Tennessee's defense.

"I think Coach Shoop was a great coach, first of all," Tennessee safety Nigel Warrior said. "Second, what I remember from him is being a great coach, putting all his guys in position to make a play. I'm pretty sure that's what he's doing at Mississippi State."

Shoop wasn't made available to the media this week as Mississippi State (3-2, 1-1 SEC) and Tennessee (1-4, 0-2) look to get back on track inside conference play.

The Bulldogs were dominated 56-23 at No. 12 Auburn two weeks ago, when the Tigers were ranked seventh. They had an open date last weekend. Tennessee is coming off a 43-14 home loss to No. 3 Georgia.

"I don't think you can ever ignore the emotional component of coaching or playing in a football game against a institution where you've been before," Mississippi State coach Joe Moorhead said about Shoop's return to Tennessee. "But Bob is the ultimate professional and any feelings he may have good, bad or otherwise regarding Tennessee and his time there, he will be able to put aside. His concentration and his defensive staff will be to put a great game plan together and make sure we are putting the kids in position to be successful."

"Everywhere he's been, he's been successful with his defenses," Jackson said. "He helped me get (to Tennessee) and I wanted to be part of that."

Shoop wasn't quite as successful at Tennessee, though.

His Tennessee defenses were decimated by injuries each year and were vulnerable to the long run. Tennessee's run defense ranked 104th nationally in 2016 and 126th in 2017 .

That Tennessee stint came after Shoop had produced top-20 defenses at Penn State and Vanderbilt.

"He's had consistently successfully productive defensive units at just about every place he's been in college football," Moorhead said. "I know the Tennessee years were a bit of an anomaly, but he bounced back strong last year."

Moorhead hired Shoop shortly after taking over Mississippi State's program at the end of the 2017 season.

"Bob grew up in the town about 10 or 15 minutes away from me," Moorhead said. "So I've known about him from a coaching standpoint for a really long time. His defenses have been very highly ranked in terms of scoring defense and total yardage for a very long time. His intelligence and the way he motivates players and obviously his production has been good."

This season, the Bulldogs have lost much of their bite on defense as they've tried to replace first-round draft picks Jeffery Simmons, Montez Sweat and Johnathan Abram while also dealing with suspensions resulting from the NCAA investigation into Mississippi State's athletic department.

The dropoff has been evident. Mississippi State ranks 12th in the SEC in scoring defense (28.5 points) and 11th in rush defense (158 yards allowed per game).

"We knew there was going to be some inexperience," Moorhead said. "We knew we were going to have to get the younger guys grown up quickly."