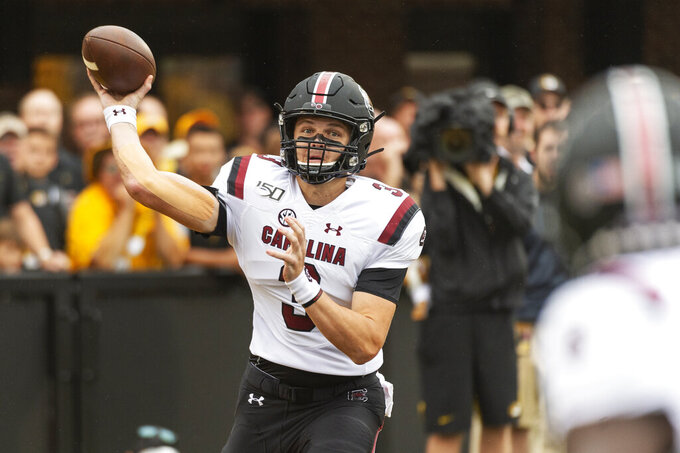 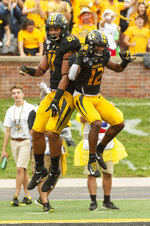 The Tigers began the scoring in the first quarter with a bizarre play. Hilinski's pass was batted back to him by Missouri defensive end Chris Turner. Hilinski grabbed the ball and spiked it at his own 1-yard line. Although the officials initially ruled the second throw an incomple — and illegal — forward pass, Garrett scooped up the ball in the end zone. After a video review showed Hilinski's spike went backward, the original call was reversed, it was ruled a fumble and the Tigers were awarded a touchdown.

The Gamecocks got back into the game in the second quarter when D.J. Wonnum intercepted a Bryant pass in the flat and rumbled 21 yards to Missouri's 1-yard line. Rico Dowdle pounded in a touchdown run to cut South Carolina's deficit to 10-7. Missouri answered with Bryant's 3-yard touchdown pass to Albert Okwuegbunam, and the Tigers led 17-7 at halftime.

After throwing for only 3 yards in the first half, Hilinski threw a perimeter screen to wide receiver Bryan Edwards on the first play of the second half, and Edwards weaved 75 yards for a touchdown. Hilinski guided the Gamecocks down the field on the ensuing drive by converting two third-down passes and one fourth-down pass. But on third-and-goal from Missouri's 3-yard line, Hilinski threw it right to Missouri's Perkins in the end zone, and he returned it 100 yards to give the Tigers a 31-14 lead.

Hilinski completed 13 of 30 passes for 166 yards. Edwards finished with six catches for 113 yards.

Missouri: Safeties Joshuah Bledsoe and Tyree Gillespie played a key role in shutting down the Gamecocks. One three-play sequence after South Carolina drove into Missouri territory in the first quarter was the best example. Bledsoe tackled quarterback Dakereon Joyner for a loss on first down. Gillespie sacked Joyner on second down, and then he broke up Hilinski's pass to Edwards on third down. That forced a 50-yard field goal attempt by Parker White, and he pushed it right.

South Carolina: The Gamecocks' path to a bowl game is getting rocky. Four of their remaining eight games are against teams that entered the weekend ranked in the Top 25.

Missouri: The Tigers have an off week before playing host to Troy on Oct. 5.