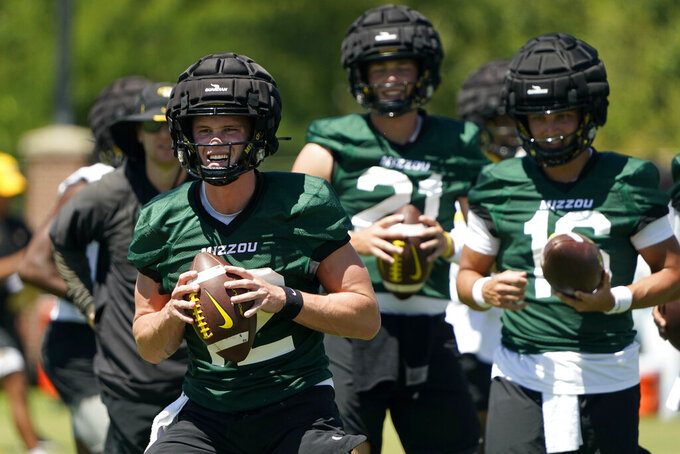 COLUMBIA, Mo. (AP) — Missouri coach Eli Drinkwitz is on his third defensive coordinator in three years at Missouri, and the Tigers are about to start their fifth different quarterback in the season opener in the last five years.

Sounds like a program that should be on shaky ground.

Yet for all the change at two of the most important spots within a football program, there are reasons to believe the Tigers are on the cusp of returning to the upper echelon of the SEC. Drinkwitz has finally had a normal year to implement his schemes after inheriting the Tigers amid the COVID-19 pandemic, the schedule is relatively favorable and perhaps the best recruiting class in school history has arrived on campus.

“Although we've had changes in both staff and players, there is a continuity to our program. There's a foundation to the program that we have and instilled," Drinkwitz said. “There's a, ‘This is how we do it around here.' There's an understanding of what we expect on the offensive and defensive side of the ball.”

The Tigers will soar or sink behind Brady Cook, the sophomore quarterback from the St. Louis area who beat out Tyler Macon and touted freshman Sam Horn for the starting job early in fall camp.

Cook spent last season backing up Connor Bazelak, then got the start against Army in the Texas Bowl, where he completed 27 of 34 passes for 238 yards and a touchdown in a last-second loss. And when Bazelak transferred to Indiana, it opened up an opportunity for Cook to move into the full-time starting role — provided he could hold off all newcomers.

“It means everything to me. I'm in a position right now I used to dream of,” Cook said, “and I really worked my whole football career for this moment, and it means so much. Growing up and watching the Tigers, it makes it really special.”

Cook should have plenty of help, including Luther Burden III, which some recruiting services called the No. 1 wide receiver prospect in the nation last year. The Tigers will need to find a new running back after Tyler Badie’s graduation.

On defense, where coordinator Steve Wilks returned to the NFL after one season in Columbia, the Tigers have turned to Blake Baker to improve a bunch that ranked 113th in scoring defense last season. Baker spent four seasons as coordinator at Louisiana Tech and two at Miami before spending last season coaching linebackers at LSU

“You can tell they have a chip on their shoulder,” Baker said. “What happened in the past has no bearing moving forward. We don't talk about last year. I came in the first day (and said), ‘Last year’s dead. What you did on tape doesn't matter.'”

The only thing that matters is what the Tigers do going forward, beginning with their opener Sept. 1 against Louisiana Tech.

Elijah Young ran 13 times for 75 yards in the Texas Bowl, giving the junior running back a slight advantage in the race to replace Badie. But he will have to hold off Stanford transfer Nathaniel Peat and Cody Schrader, who ran for more than 2,000 yards at Division II Truman State.

Burden has gotten all the hype — and for good reason — but there's a good chance Tauskie Dove leads the Tigers in nearly all pass-catching statistics this season. The fifth-year senior had 38 catches for a team-best 576 yards last season.

Drinkwitz dipped heavily into the transfer portal in an attempt to upgrade his defense. Ty'Ron Hopper, a linebacker from Florida, and Joseph Charleston, a safety from Clemson, could be starters in Week 1. On the defensive line, Josh Landry from Baylor, Jayden Jernigan from Oklahoma State and Kristian Williams from Oregon are expected to contribute.

Harrison Mevis has been one of the nation's best kickers from the moment he stepped inside Faurot Field. He was 17 of 20 on field goals as a freshman and 23 of 25 last season, including 3 for 3 on those longer than 50 yards.

The Tigers moved their opener against Louisiana Tech to Thursday night to get better TV visibility. It also gives them a couple of extra days to prepare for a tough trip to Kansas State the following weekend. If the Tigers can beat their former Big 12 rival, they get a tune-up against Abilene Christian before starting the SEC schedule with a trip to Auburn.