Mond back in 4th year as starter to lead No. 13 Texas A&M 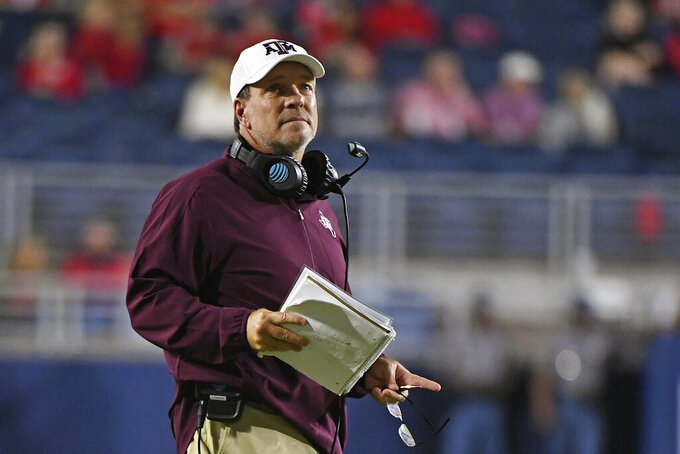 FILE - Texas A&M head coach Jimbo Fisher watches during the first half of an NCAA college football game against Mississippi in Oxford, Miss., Saturday, Oct. 19, 2019. As Jimbo Fisher enters his third season at Texas A&M he has a luxury afforded to very few coaches: a four-year starter at quarterback in Kellen Mond. (AP Photo/Thomas Graning, File)

As Jimbo Fisher enters his third season at Texas A&M he has a luxury afforded to very few coaches: a four-year starter at quarterback in Kellen Mond.

Mond is one of the most experienced quarterbacks in the nation this season after starting 36 games his first three years with the Aggies. The 6-foot-3, 217-pound Mond has improved every year and is looking to take another step in his final season to help the 13th-ranked Aggies contend in the rugged Southeastern Conference.

“I’ve seen tremendous confidence from him,” Fisher said. “This guy is maturing like it used to be. You’d see guys develop each year as they get older in the old days, when they’d stay in school and not leave early. You see it in his confidence, awareness, presence around our team with coaches and players ... I’m very pleased with his performance overall.”

Mond threw for 2,897 yards with 20 touchdowns last season to help Texas A&M to an 8-5 record. He spent the offseason and his time during lockdown because of the coronavirus thinking about how to improve.

“Just being able to just sit back and actually just evaluate myself and look myself in the mirror and figure out what I need to do to help my team and also different ways I can lead and help elevate this team,” Mond said. “I feel really good and I think this team is feeding off my mentality right now and I think we’re in a really good state.”

Mond’s teammates have noticed his evolution and raved about his work in camp so far.

“He’s really grown a lot, especially mentally,” running back Isaiah Spiller said. “He’s really stepping up and being leader on this team which we need. He’s going to do well this year.”

Aggies fans can’t wait to get a look at a pair of star freshman recruits in receiver Demond Demas and running back Devon Achane. Demas is a five-star recruit who missed his senior season after being ruled ineligible following a transfer after his junior year. In 2018, he had 50 catches for 1,574 yards and 23 touchdowns.

Fisher was asked if he expects to see Demas play this season.

“That’s up to him,” Fisher said. “Demond is very intelligent guy. Great ability ... expecting him to compete. We’ll find out. Too early to tell that but he has the ability to play.”

Achane, a four-star recruit who has sprinter’s speed, ran for 2,097 yards and 38 touchdowns and added 694 yards receiving with 10 touchdowns as a senior at Fort Bend Marshall.

“We flex him out, do those kinds of things and he looks very good, a very, very smooth player, very fast we know that, but a natural football player,” Fisher said. “He catches the ball very well, has very good ball skills, and has been developing very well”.

The Aggies are loaded at running back and may split the bulk of the carries between Spiller and Ainias Smith.

Spiller led the Aggies with 946 yards rushing and 10 touchdowns as a freshman last season. Smith spent his freshman year at receiver but will move to the backfield this season.

“I’ve been very pleased with their learning curve so far, ability to run between tackles and ability to catch the football,” Fisher said. “I like that group. They’ve done a really nice job.”

Spiller is focused on taking a step forward this year despite rushing for almost 1,000 yards as a freshman and isn’t worried about splitting carries in 2020.

“I feel like I can do more and be better,” he said. “That’s the mindset I bring every day. That was last year. I’m worried about this year. I feel like I have something to prove. Someone is out there still working, so I can’t slack.”

The Aggies have dealt with the coronavirus well so far and have not lost any practice time due to an outbreak.

Texas A&M will host fans at Kyle Field at approximately 25% of normal capacity for its opener against Vanderbilt on Sept. 26. The capacity for the 102,733-seat outdoor stadium could change for later games in the season as local and state health developments evolve.

Fans will be required to wear masks while in the stadium and enhanced cleaning and sanitizing procedures have been implemented throughout the stadium.

The all-SEC schedule because of adjustments in the wake of the pandemic leaves the Aggies with little time to prepare before perhaps their toughest games of the season.

After their opener against Vanderbilt the Aggies must travel to play No. 3 Alabama in Week 2 before hosting eighth-ranked Florida on Oct. 10.