Mond leads No. 10 Texas A&M in opener against Vanderbilt 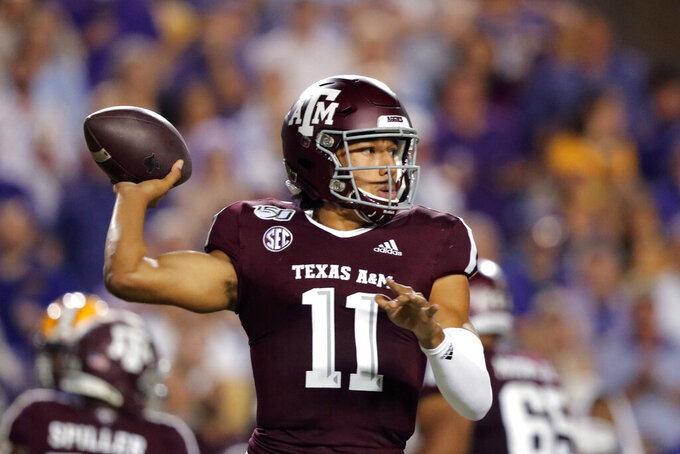 FILE - In this Nov. 30, 2019 file photo, Texas A&M quarterback Kellen Mond (11) throws a pass during the first half of the team's NCAA college football game against LSU in Baton Rouge, La. The coronavirus pandemic has shut down much of Division I football, but with three of the Power Five leagues still playing, there are still some big games to look forward to. Florida faces a tough test on Oct. 10, 2020, at Texas A&M. (AP Photo/Gerald Herbert, File)

The Aggies hope to work out some kinks and play a clean game in the opener in what is their only preparation before a trip to No. 2 Alabama next week followed by a visit from fifth-ranked Florida on Oct. 10.

Texas A&M’s veteran defense vs. Vanderbilt’s new quarterback. Vanderbilt coach Derek Mason wouldn’t say this week who will start at QB, but none of his options have ever thrown a pass in an FBS game. Mason’s options include freshmen Ken Seals and Mike Wright and junior college transfers Danny Clark and Jeremy Moussa. All but one of A&M’s starters on defense are upperclassmen.

Vanderbilt: LB Dimitri Moore. The team’s leading tackler will play this season after changing his mind about opting out because of concerns about COVID-19. Moore, who is a Butkus Award candidate, had 99 tackles last season to rank fourth in the Southeastern Conference.

Vanderbilt last upset a ranked team on Sept. 16, 2017, beating No. 18 Kansas State. ... This is Vanderbilt’s latest opener since 1959 when the Commodores opened on Sept. 26 at Georgia. ... The crowd at Kyle Field on Saturday will be limited to about 25% of the 102,733-seat capacity because of the coronavirus. ... Texas A&M has won seven straight home openers. ... The Aggies are 11-3 at home under coach Jimbo Fisher. ... Mond has had at least one TD pass and one rushing touchdown in 15 games in his career... Sophomore Isaiah Spiller needs 54 yards rushing to reach 1,000 for his career. ... Senior OT Carson Green is expected to make his team-leading 30th straight start on Saturday. ... Last season’s top receiver Jhamon Ausbon and starting linebacker Anthony Hines both opted out of the season.