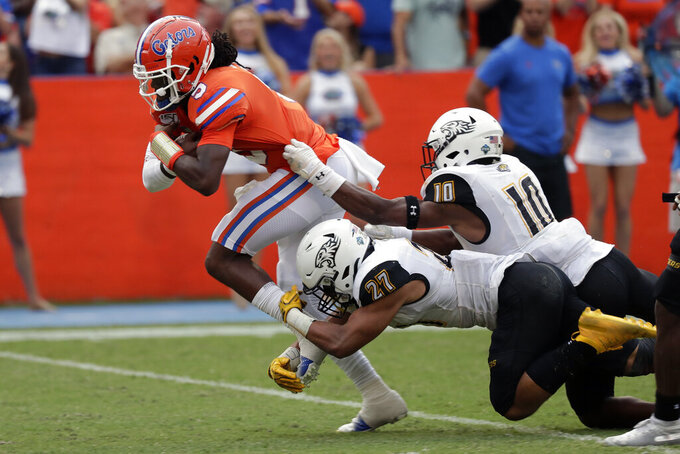 Florida quarterback Emory Jones, left, runs to the 1-yard line before he is stopped by Towson safety S.J. Brown II (27) and cornerback Robert Javier (10) during the second half of an NCAA college football game, Saturday, Sept. 28, 2019, in Gainesville, Fla. (AP Photo/John Raoux)

GAINESVILLE, Fla. (AP) — Florida coach Dan Mullen protected, even defended, his young offensive line for much of the first month of the season.

After another sluggish performance, this one against lower-division Towson on Saturday, Mullen had seen enough.

Mullen ripped his O-line following the 38-0 victory for failing to create much push or open many holes against another team from the Football Championship Subdivision.

"That has got to improve," Mullen said. "The mental toughness of the offensive line in their preparation has got to improve as we move forward. ... They're young guys. They go, 'Coach, I'm working.' No, you're not, obviously not, because if you were working, we wouldn't have missed assignments. So what you're doing is not enough. They need to do more."

"When it comes to better competition and getting into SEC play, you have to take it to another level," center Nick Buchanan said. "And we're prepared for the challenge."

The Gators ran 16 times for 60 yards in the first half against Towson, which entered giving up more than 200 yards a game on the ground. Florida was expected to impose its will on a defense that was seemingly at a disadvantage in terms of size, speed, strength and depth.

Instead, the Gators did little until Mullen's halftime talk, which he said "wasn't super friendly."

The coach was still unimpressed after the game. Florida finished with 32 carries for 160 yards, with 63 of those coming on two runs in the final 21 minutes.

It was an about-face for Mullen, who shielded his line from criticism after similar performances against Miami, Kentucky and Tennessee. Florida's first-half rushing totals in those: 17 carries for 40 yards against the Hurricanes, 14 carries for 20 yards at the Wildcats and 19 carries for 46 yards versus the Volunteers.

The Gators played better after the break against Kentucky and Tennessee, but all those lackluster starts proved to be red flags.

"Taking it to the next level is when we don't have to go to halftime to make those adjustments in the first place," running back Dameon Pierce said.

Florida has survived its run-game woes so far. But with unbeaten Auburn, fifth-ranked LSU, improving South Carolina and No. 3 Georgia on tap over the next five weeks, the Gators know they have to improve to have any chance of staying unbeaten and in contention for a championship.

For now, Mullen has put it all on the line.

Last year's unit helped produce the 10th-best rushing offense in school history. The Gators average 213.2 yards a game on the ground and allowed 18 sacks, which ranked 20th in the Football Bowl Subdivision. But three guys were selected in the NFL draft, leaving huge holes to fill.

Those still remain. The question now is whether Florida's can prevent them from being exploited by Auburn.

"We've got plenty of gears that we can kick into," Pierce said. "We try to take another step, another step, and eventually, hopefully, the outcome will be winning games."