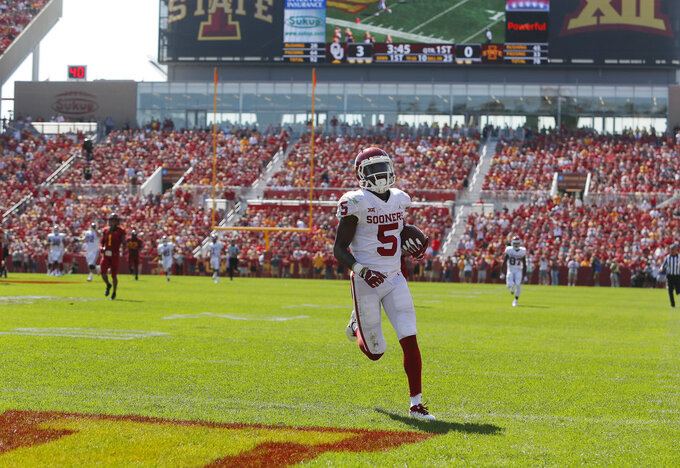 Oklahoma wide receiver Marquise Brown runs in for a touchdown during the first half of an NCAA college football game against Iowa State, Saturday, Sept. 15, 2018, in Ames, Iowa. (AP Photo/Matthew Putney)

AMES, Iowa (AP) — Kyler Murray threw for 348 yards and three touchdowns and No. 5 Oklahoma held off Iowa State 37-27 on Saturday in the Big 12 opener for both teams.

Marquise Brown had 191 yards receiving and a TD for the Sooners (3-0, 1-0 Big 12), who extended the nation's longest road winning streak to 17 games while avenging a stunning home loss to the Cyclones a year ago.

Iowa State (0-2, 0-1) didn't make it easy for the Sooners, rallying from a 14-point deficit to make it 34-27 late in the third quarter. But the Sooners killed nearly eight minutes on a drive that ended with a 42-yard field goal from Austin Siebert with 2:51 left, and Parnell Motley's interception with 1:11 to go sealed.

"Iowa State's a good team. You give them any room, they're going to capitalize on it. They're a tough out," Oklahoma coach Lincoln Riley said.

Backup Zeb Noland threw for a career-high 360 yards and a pair of long touchdown passes to Hakeem Butler for the Cyclones (0-2, 0-1), who were without starting quarterback Kyle Kempt (knee).

"I thought we settled in," Campbell said. "I thought we played much better in the second half than the first half."

Oklahoma: Murray, who also ran for a team-high 77 yards, breezed through his first start on the road against a conference opponent — and he and Brown looked like one of the most dangerous duos in the country. "That kid is really special," Campbell said of Murray. But the Sooners have to be a bit concerned about their defense, which had no answer for the 6-foot-6 Butler.

Iowa State: The Cyclones offense showed some life after a dismal showing last week in a 13-3 loss to Iowa — led by Butler's 174 yards receiving. But what should be troubling for the rest of the Big 12 is that this was a pretty good defense that Murray and the Sooners carved up. Oklahoma gained 519 yards against the Cyclones, who allowed just 20.9 points a game in 2017.

Oklahoma hosts Army next week in its final nonconference game.