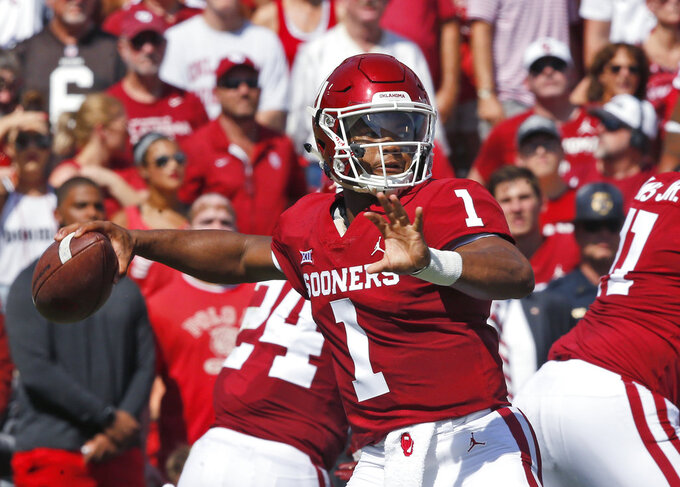 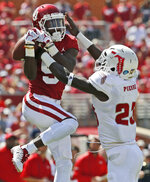 NORMAN, Okla. (AP) — Kyler Murray, taking over for Heisman Trophy winner Baker Mayfield this season, passed for 209 yards and two touchdowns to lead No. 7 Oklahoma over Florida Atlantic 63-14 on Saturday.
Murray connected on 9 of 11 passes in just under one half of action. The first-round Major League Baseball draft pick also ran for 23 yards on four carries.
Marquise Brown caught six passes for 133 yards and a touchdown, and Rodney Anderson rushed for 100 yards and two touchdowns on just five carries. Lee Morris caught a 65-yard touchdown pass and blocked a punt for the Sooners.
Oklahoma led 42-0 at halftime — the most points the Sooners have scored in a first half since 2008.
Former Oklahoma quarterback Chris Robison passed for 157 yards for Florida Atlantic. Oklahoma dismissed him last year for violating team rules.
Florida Atlantic running back Devin Singletary, one of the nation's best running backs last season, was held to 69 yards on 18 carries.
THE TAKEAWAY
Florida Atlantic: Many thought the Owls would challenge the Sooners and some thought an upset was possible. Instead, Florida Atlantic was dominated in every aspect of the game — Oklahoma even scored on a blocked punt. Lane Kiffin's Owls averaged 41 points per game last season, but they did not score until the final minute of the third quarter on Saturday.
Oklahoma: The Sooners set the tone early and put together one of its most complete performances in recent years. They didn't miss a step on offense with Mayfield gone, and the defense dominated.
POLL IMPLICATIONS
Oklahoma might get a boost out of this one. The Owls were 30th in votes in the preseason poll and coming off an 11-3 season that ended with a 10-game winning streak. Though the Sooners were favored, the level of dominance was noteworthy.
UP NEXT
Florida Atlantic: The Owls will host Air Force on Saturday.
Oklahoma: The Sooners will host UCLA on Saturday.
___
Follow Cliff Brunt on Twitter: www.twitter.com/CliffBruntAP .
___
More AP college football: https://apnews.com/tag/Collegefootball and https://twitter.com/AP_Top25