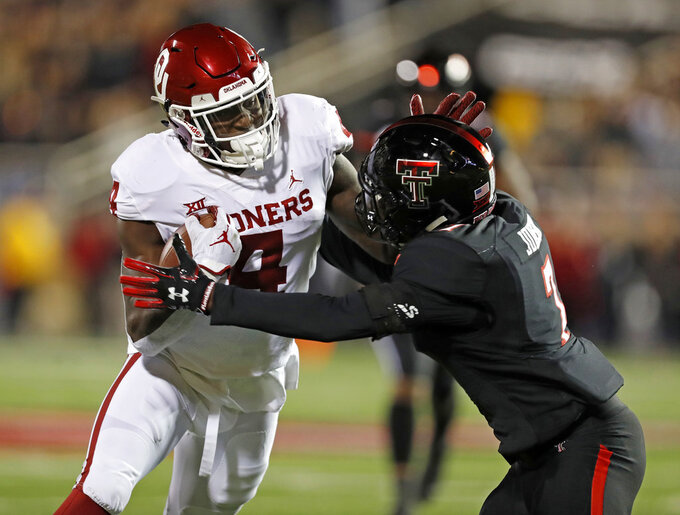 Oklahoma's Trey Sermon (4) tries to break away from Texas Tech's Jah'Shawn Johnson (7) during the first half of an NCAA college football game Saturday, Nov. 3, 2018, in Lubbock, Texas. (AP Photo/Brad Tollefson) 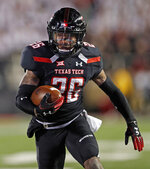 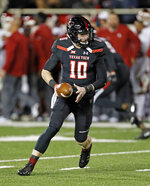 LUBBOCK, Texas (AP) — Kyler Murray kept slinging it and running it after two quick interceptions put No. 7 Oklahoma in a two-touchdown hole.

Texas Tech's Alan Bowman didn't get a chance to finish the duel in the second half because of a recurrence of the partially collapsed lung that sidelined the freshman quarterback five weeks ago.

Murray recovered from those early picks by throwing for 360 yards and three touchdowns and running for 100 yards and another score to rally the Sooners to a 51-46 victory over the Red Raiders on Saturday night.

Trey Sermon set career highs with 206 yards rushing and three TDs, including a clinching 30-yarder , as the Sooners (8-1, 5-1 Big 12) stayed in the hunt for a return to the College Football Playoff with their 19th straight win in a true road game and 14th consecutive November victory.

Oklahoma, which was seventh in the first playoff rankings released this past week, handed the Red Raiders (5-4, 3-3) their eighth straight loss against a Top 10 team going back to 2012.

"Well, what was I thinking?" Murray said, repeating part of the question after going 20 of 35 passing without another turnover after the two quick ones.

The Red Raiders led 31-28 at halftime, but Bowman didn't return and ended up in a Lubbock hospital, just as he did Sept. 29 when he first sustained the lung injury in a loss to West Virginia.

Bowman, who the school said would be held overnight for observation, returned two weeks ago against Kansas. Coach Kliff Kingsbury said Bowman re-injured the lung on a run near the goal line late in the first half.

The Big 12 passing leader's absence changed the flow of a game that was looking a lot like the 65-59 touchdown fest the Sooners won in Lubbock two years ago.

Texas Tech punted three straight times without getting a first down after Jett Duffey replaced Bowman again, just as he did against the Mountaineers.

But Duffey did get the Red Raiders moving again, and they pulled within two on his 4-yard scoring pass to Zach Austin on fourth down midway through the fourth quarter. But Robert Barnes intercepted the 2-point conversion pass and returned it 98 yards for two points and a 44-40 OU lead.

"I should have found a way to get him more comfortable at the start of the second half than I did," Kingsbury said. "Once he got in a rhythm and he was competing and doing his deal, he played really well."

Both of Murray's interceptions were by Vaughnte Dorsey, on his first throw of the game and again on OU's second possession.

Bowman threw a 6-yard touchdown pass to T.J. Vasher after the Red Raiders got the ball on the Oklahoma 3 following Dorsey's 17-yard return on the first interception .

After a 31-yard return on Dorsey's second pick , Duffey came on as change of pace replacement for Bowman and threw a screen that Ta'Zhawn Henry took 14 yards for a 14-0 lead.

Murray bounced back to lead the Sooners to 687 total yards in what figures to be his only chance to match Mayfield's run to the four-team playoff last season since the junior is expected to pursue pro baseball after one year as OU's starter.

"Sometimes a guy can get a little gun shy when you have a start like that," said Lincoln Riley, who was on the sidelines at his alma mater for the first time since replacing Bob Stoops. "And he wasn't. He kept flinging. He ran the ball well."

Lee Morris caught two of Murray's TDs, the second a 46-yarder that put the Sooners ahead for good 35-31 in the third quarter. Morris had 101 yards receiving. Texas Tech's Antoine Wesley caught 12 passes for 199 yards.

Oklahoma: The Sooners gave up more than 300 yards for the first time in three games since former Texas Tech assistant Ruffin McNeill replaced the fired Mike Stoops as defensive coordinator. It's hard to gauge the progress of the unit because of Bowman's injury. The Red Raiders finished with 473 total yards.

Texas Tech: The Red Raiders will wonder what might have been if Bowman had been able to return in the second half. He was 21 of 26 for 227 yards with two touchdowns and no interceptions. Still, Duffey showed persistence similar to first time Bowman was injured. He threw for two scores and ran for one that gave Texas Tech a shot at an onside kick with 1:05 remaining. It failed.

OU could move up a spot because of No. 4 LSU's shutout loss to top-ranked Alabama. The rest of the teams ahead of the Sooners won impressively and the two teams behind them had closer-than-expected victories.

Receiver CeeDee Lamb stopped Oklahoma's momentum when he was called for a personal foul and unsportsmanlike conduct after catching a pass for a first down at the Texas Tech 7. The 30 yards in penalties led to a punt when the Sooners were on the verge of a second straight touchdown drive and their first double-digit lead in the third quarter.

Oklahoma: Bedlam is at home against Oklahoma State next Saturday.

Texas Tech: Another big home game against No. 15 Texas next Saturday.