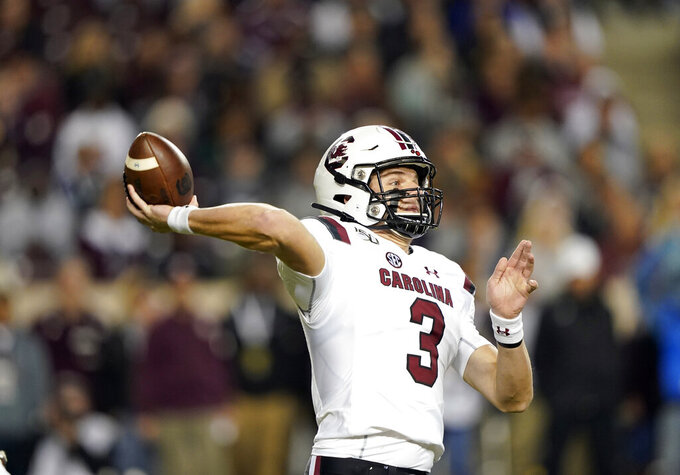 FILE - South Carolina quarterback Ryan Hilinski (3) throws a pass against Texas A&M during the first quarter of an NCAA college football game Saturday, Nov. 16, 2019, in College Station, Texas. South Carolina and coach Will Muschamp haven't had a true quarterback competition since 2016 _ and he's taking much of the way through camp as Ryan Hilinski, Collin Hill and Luke Doty try to become the Gamecocks' passer. (AP Photo/David J. Phillip, File)

Muschamp and the Gamecocks have had the luxury of an established starter in recent years since Jake Bentley took over as a freshman in the middle of the 2016 season and started 33 of the next 34 games into last year.

Muschamp has liked what he's seen so far and is not ready to choose who'll take the opening snap when South Carolina opens Sept. 26 against No. 25 Tennessee.

“We’ve got a great battle going on,” Muschamp said. "It’s making each other better, it’s making our football team better. We’re going to let it go again this week and then make a decision hopefully next week.”

Hilinski, the 6-foot-3, 225-pound sophomore, figured to have the lead on starting after he came in to play the final 11 games following a season-ending foot injury to Bentley.

And while Hilinski had some stellar moments — 324 yards passing and two touchdowns in a loss to Alabama — he struggled through injuries as South Carolina lost five of its final six games to go 4-8.

Hilinski had surgery for a meniscus tear in his left knee after the season and has been healthy and productive in fall camp, so much so that he was named the offensive player of the Gamecocks' first camp scrimmage two weeks ago.

But Hill, the graduate transfer from Colorado State, earned that honor after last Saturday's workout, according to Muschamp.

Hill came in January, following his former head coach at Colorado State, Mike Bobo, who is the new offensive coordinator and quarterbacks coach for the Gamecocks.

Hill's strength is his knowledge of Bobo's system. But he's coming off a knee ligament injury while at Colorado State, where he started the first three games before missing the rest of the year.

Hill, too, has appeared healthy during camp and has looked sharp running Bobo's schemes.

Muschamp said Hill has a toughness at coming back from injuries that the team respects.

“Obviously Collin’s understanding of the system, because he’s been in it now for years, it shows up a lot as far as his experience is concerned,” he said.

Hilinski is not hung up on the decision; he said he is focused on improving each practice and learning everything he can from Hill.

“When we think of competition, a lot of people think about who is the number one or two, and right now Collin and I are just competing and making each other better every day,” Hilinski said.

Hill has been welcomed by Hilinski and his new teammates, the two meshing well these past nine months.

“Everybody gets along well, helping each other out, and it’s been a good competition just splitting reps and trying to make the most of our opportunities,” Hill said.

The wildcard and longshot is Doty, a 6-1 freshman who enrolled in January and has shown versatility in running the offense and playing wide receiver.

Bobo, the third offensive coordinator in Muschamp's five seasons, thinks it's important to have a starter in place before game week, still about 10 days away.

If it takes a bit longer to determine a starter, that's OK, Bobo said. The coronavirus pandemic makes it essential to have multiple players prepared for any circumstance, he said.

“This is a different year where you know every man needs to be ready at every position with what we're dealing with,” he said.