Mushfiqur guides Bangladesh to 262-7, a big task for Afghans 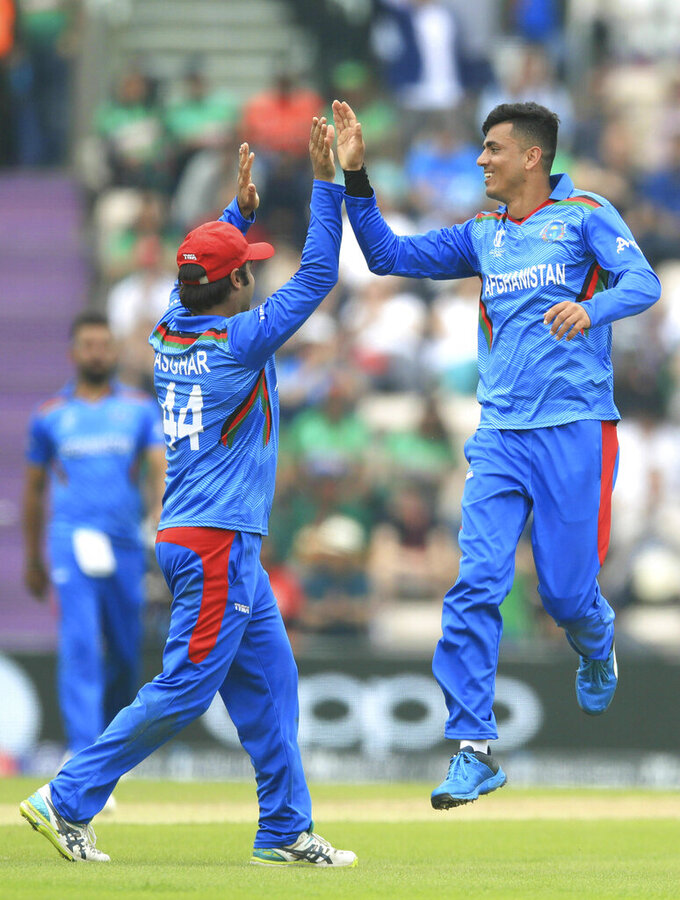 SOUTHAMPTON, England (AP) — Mushfiqur Rahim passed 50 for the third time at the Cricket World Cup, scoring 83 to guide Bangladesh to 262-7 after being sent in by Afghanistan on Monday.

Mushfiqur went to the crease at the end of the 17th over and was caught in the deep in the 49th as he tried to lift the run rate against Dawlat Zadran's bowling.

He'd raised his half-century with a six, the only one of the innings, and shared important partnerships of 61 with Shakib Al Hasan (51), 56 with Mahmudullah (27) and 44 with Mosaddek Hossain, who belted 35 from 24 deliveries before he was bowled by Gulbadin Naib on the last ball.

Mujeeb Ur Rahman took three wickets, including the key dismissal of Shakib in the middle, to return 3-39 from 10 overs and was the pick of Afghanistan's bowling attack.

Afghanistan restricted India to 224-8 on the same pitch two days ago and got within 11 runs of what would have been one of the biggest upsets in the tournament's history. That prompted skipper Naib to field first and try to keep the chase as low as possible.

It didn't quite work out, leaving Afghanistan a target bigger than it has ever successfully chased against Bangladesh.

The Afghans are seeking their first win of the tournament, while Bangladesh is aiming for a third win to keep in playoff contention.

The Afghans tried to mix things up, opening with offspinner Mujeeb, who only had two wickets previously in the tournament but who troubled the Bangladesh batsmen with his wide variation of deliveries.

He had Liton Das (16) well caught by a diving Hashmatullah Shahidi at short cover with the total at 23 in the fifth over.

Bangladesh rallied with a 59-run stand between Tamim Iqbal (36) and Shakib before Mohammad Nabi broke through in the 17th over with a faster, full ball that bowled Tamim.

Shakib passed 40 for the sixth consecutive World Cup innings and posted his fifth half-century of the tournament. But his 69-ball knock ended when he failed to pick a straighter ball from Mujeeb and was trapped lbw directly in front.

He'd earlier survived a confident appeal from Rashid Khan for lbw but otherwise was composed, and became the first Bangladesh batsmen to pass 1,000 career runs in the World Cup.

Mujeeb struck again to get an lbw decision against Soumya Sarkar (3), who had only narrowly escaped being run out attempting to get off the mark. Bangladesh slipped to 151-4 after 32 overs.

Afghanistan's spinners dominated the middle overs, keeping the run rate lower, but some late hitting from a hobbling Mahmudullah, who twice needed treatment on his lower leg, and Hossain ensured a 250-plus total on a difficult batting pitch.

Naib picked up 2-56 but star spinner Rashid Khan had another difficult day, with his 10 overs returning 0-52.