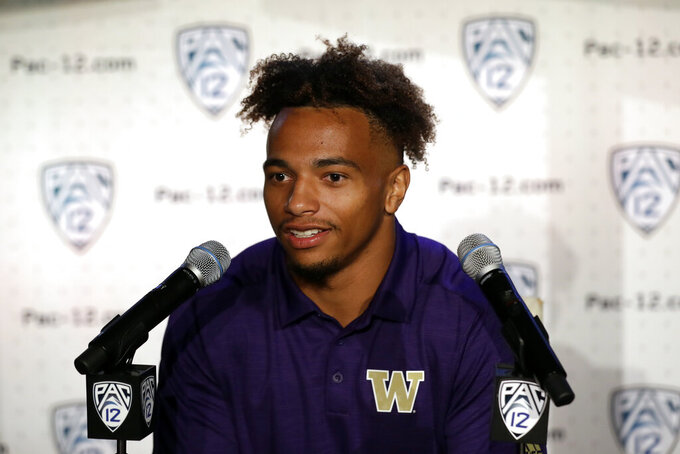 SEATTLE (AP) — Myles Bryant will be sitting in one of Washington's defensive meeting rooms, hear a reference made by defensive coordinator Jimmy Lake dating to 2016 and realize he and the coach are the only people in the room with any firsthand recollection of what happened.

"We're the only ones in there laughing," Bryant said. "In a sense I am the old guy when it comes to that and a lot of guys are looking up to me to help them out."

Once a walk-on with the Huskies, Bryant is now an indispensable fixture in a secondary that is still expected to be the strength of Washington's defense. He can play multiple positions and brings stability to a position group that is otherwise in flux.

"If we had five of him that would be awesome," Lake said. "He's going to be all over the place. I can guarantee that."

In what has seemingly become an annual exercise, the Huskies are breaking in a new set of starters in their defensive backfield after an exodus to the NFL.

Cornerbacks Byron Murphy and Jordan Miller and safeties Taylor Rapp and Jojo McIntosh all said goodbye after last season. Murphy (Arizona) and Rapp (Rams) were taken in the second round, Miller (Atlanta) was selected in the fifth round and McIntosh is in camp with Washington after signing as an undrafted free agent.

But instead of dropping off, the Huskies simply appear to be reloading. Elijah Molden, Keith Taylor and Kyler Gordon are all expected to step into starting roles.

Bryant is the anchor.

"He can play any of the five positions on the back end and play it at a very high level. He's already played there in games. And he's really been a leader for us for a couple of years," Lake said. "Even the vets a couple of years ago saw how hard he worked in the weight room, how hard he worked on the practice field. He's always led us in our drills since he was a sophomore. He's a big-time leader for us not only with the DBs, but the whole defense and the whole team."

While Bryant has dabbled at other positions in his first three seasons, his primary spot was as Washington's nickel cornerback. And he has thrived at that spot, getting named second-team All-Pac-12 last season despite being the fourth or fifth most notable player in his own defensive back group.

Molden said Bryant's knowledge of formations and his foot speed stand out.

"Especially since we're not the biggest guys on the field we have to have the best feet," Molden said. "I remember my freshman year how he would (move) at the nickel position and copy that. Even now, every once in a while I'll need to be reminded of the steps if I'm bouncing around positions. I'll ask him what he thinks."

With the departures, the Huskies know they need Bryant to be more than just a nickel cornerback matched up with wide receivers in the slot. Through the spring, Washington used Bryant at safety and has continued doing so into the opening days of fall camp. Bryant has also played on the outside against bigger wide receivers.

Ultimately, the nickel cornerback position is likely Bryant's best option in the NFL. But for now he's willing to go wherever Lake and his team needs him.

"I think there are nuances of my game I can take to the next level," Bryant said. "I'm trying this fall camp to mold it even more and improve it even more to really kind of come into my own."