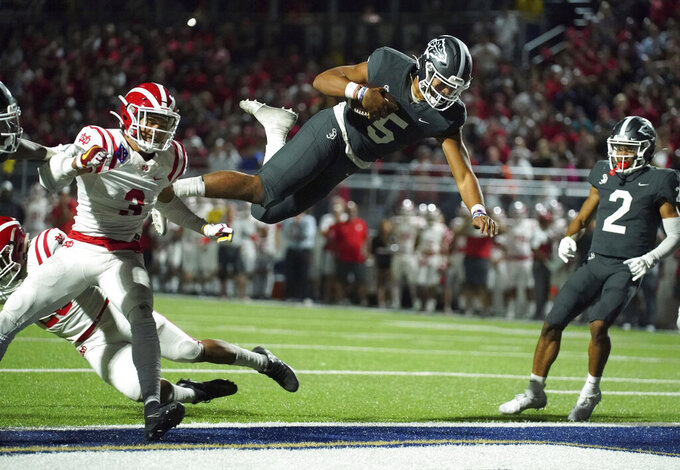 FILE - In this Friday, Oct. 25, 2019 file photo, Despite the acrobatic jump by St. John Bosco quarterback DJ Uiagalelei (5) into the end zone, it was called back due to a penalty against Mater Dei in Bellflower, Calif. Only Texas and Florida produce more major college football players than California, but across the state overall participation in the sport at the high school level is on the decline. The percentage of players competing at the highest level of college football who are from California has dropped, too. (Scott Varley/The Orange County Register via AP, File)

The quarterback built like Jameis Winston? Five-star prospect, heading to Clemson. That chiseled linebacker with the square jaw? Four star, committed to Ohio State. That super-fast receiver? Four star. The other receiver is a four star, too. That OTHER receiver, the tall one? Four star, but he’s just a junior, like the other four-star linebacker. Couple three-star players on the offensive line. Another on the defensive line.

There are few high school football teams anywhere in America as good as this, but one of them is just a 23-mile drive down Interstate 5. Bosco’s Trinity League rival, Mater Dei High School, is ranked No. 1 nationally after beating the Braves 38-24 in October, a matchup with enough high-end talent to make a top-40 recruiting class from just the seniors on each team. Bosco is ranked No. 4.

The dichotomy of California high school football is glaring: The state’s best programs are among the very best in the country while the foundation is crumbling.

The percentage of players competing at the highest level of college football who are from California has dropped over the last five years, too, from 11.5% in 2013 to 10.5% in 2018, according to the NCAA. This is problematic not just for those who love football in the Golden State, but for schools in the Pac-12 that are most reliant on California players. There are two more worrisome trends for the Pac-12: While the number of blue-chip recruits from California is still high, those top players have been passing on Pac-12 offers more frequently.

National trends related to safety and youth sports specialization are taking a toll in California, but the top-heavy nature of the competition in the Los Angeles area, where many of the best players cluster to form super teams, appears to be compounding problems.

Petro Papadakis, a former Southern California football player who is now an analyst for the Pac-12 Network, says the “hometown vibe” is gone.

“The overarching theme here is private schools and academies are kind of taking away the great Southern California high school football tradition that I grew up with,” he said. “We still have great football here. We still produce great players. But the academy part of it is bad, and the o-line, the no longer dedicating yourself to the fronts and this seven-on-seven culture in the summer, which is the furthest thing from real football you can have. We've kind of been led astray a little bit I guess would be a good way to put it.”

Corona Del Mar offensive coordinator Kevin Hettig, who has been working with O’Shea for more than a decade, said they first saw signs of trouble for the public schools in 2008 when they were at Trabuco Hills High School and their best player left to play at Orange Lutheran.

That was the start of an arms race in the Trinity League, which was formed in 2006. Bosco lagged its league competition for years before winning five championships over a seven-year span under head coach Jason Negro, who had been at Trabuco Hills.

Mission Viejo head coach Chad Johnson was offensive coordinator at Bosco for eight years. He said public schools like his, especially city schools, face funding issues and less emphasis has been placed on sports programs. Meanwhile, private schools could offer top-flight competition, commitment to the football program and assistance with travel and tuition based on need.

Bosco took advantage of a prime location, easily accessible by two major freeways to both Orange and Los Angeles counties, to draw players from all over, Johnson said.

“It was a sleeping giant,” Johnson said. “So we just woke it up.”

Negro runs a brisk practice, broken into rigidly timed periods and with very little standing around by the players. Hip-hop music is the soundtrack. His goal is to make Bosco the best high school football program in the country.

“I mean people want to sit there and say you know oh they got this kid from here they got that kid from there, whatever,” Negro said. “Well, I mean as long as the rules are going to dictate what we can and cannot do and we follow those rules, I mean, I don't think there should be making excuses for our success and trying to cast shadows on what we're doing. You know when I was at the public school we had kids coming in from all over the place. We had transfers coming in from all over the place.

“The difference was that the level of play just wasn't as high-caliber as the ones that I'm getting now,” he said. “I didn't play in a league like I play now that was kind of forcing me to be as good as I possibly can be.”

On this day, Bosco was preparing for a game at Mililani High School in Hawaii. The Braves also hosted DeMatha High School from Maryland earlier in the season and made a road trip to Bishop Gorman in Las Vegas.

Bosco’s players are already part of a national program, so it’s no surprise they think big when they plot a course for their futures.

D.J. Uiagalelei is the top-rated quarterback in the 2020 signing class. He is 6-foot-4, 245 pounds. He is committed to Clemson, where he plans to enroll early to compete against star quarterback Trevor Lawrence next year and play baseball, his first love, in the spring.

Uiagalelei grew up rooting for the University of Southern California, like so many kids here, but when it came time to decide where he wanted to play in college he wanted more.

According to 247 Sports’ player rankings, five of the top six California players from the class of 2020 are committed to schools outside the Pac-12, including Mater Dei quarterback Bryce Young, who flipped his commitment from USC to Alabama in September. And that doesn’t include the top-rated player in the state, running back Justin Flowe from Upland, who is strongly considering signing with Clemson.

Ask anybody who has covered West Coast football for a while what is wrong with the Pac-12 and among the first answers will be: USC is not good enough. The Trojans have always been the West Coast’s marquee college football program, the one best positioned to be a national power thanks to its tradition of success and easy access to great athletes. But since the Pete Carroll, Reggie Bush glory days on the 2000s, the Trojans have churned through head coaches and rarely fielded teams capable of competing with the best of the best.

Oregon has tried to fill that void. Utah has had success and this year has its best team since Urban Meyer was the coach 15 years ago. Washington has re-emerged as a perennial Pac-12 contender under coach Chris Petersen. But none have the Trojans’ championship pedigree or national cache.

Underlying all this is a football culture in California that is not as strong as it is in other parts of the country, where the game is a way of life in many communities.

“There's so many things that you can do in California that the kids are exposed to ... that it's not just all centered around football. It's not just centered around these small towns (where) that's the only way that I can get out to areas across the country,” Negro said. “I don't necessarily see it at my level. You know my kids that are here, they want to focus on using our school as a platform to get to where they want to go, which is to play college football.”