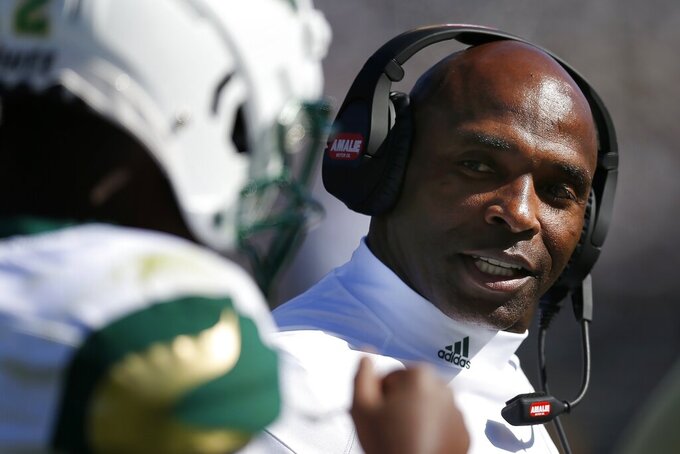 ANNAPOLIS, Md. (AP) — Navy and South Florida have each won two in a row and will strive to keep the momentum going in a pivotal American Athletic Conference matchup on Saturday.

The Bulls are looking for more consistency behind redshirt freshman quarterback Jordan McCloud, who has thrown for 624 yards with eight touchdowns — along with five interceptions — since taking over the starting job for the injured Blake Barnett (ankle).

Navy (4-1, 2-1) already surpassed its win total from last season. The Midshipmen can extend their winning streak to three games for the first time since 2017 when they won five straight to start the year.

Some other things to know about the South Florida-Navy matchup:

Perry was named the AAC Offensive Player of the Week after running for 218 yards and three touchdowns last Saturday in Navy's 45-17 win over Tulsa. Perry averaged 10.9 yards per carry and scored on runs of 29, 35 and three yards.

In addition, Navy senior punter Owen White was named to "Ray Guy's Great 8 Punter of the Week Award" after averaging 43.8 yards on five kicks against the Golden Hurricane.

South Florida sophomore Bentlee Sanders is averaging 29.2 yards per kick return, which is 10th-best in the FBS. He is a just a couple of yards shy of the program single-season record of 31.7 yards, set by J.R. Reed in 2003

Navy's new defensive coordinator Brian Newberry didn't waste any time putting his stamp on the team. The Midshipmen are allowing just 18.8 points per game and are ranked sixth nationally for total defense after finishing 86th in 2018. Navy also ranks ninth in rushing defense, holding teams to 86 yards per game, and has forced a turnover in five of its six games this season.

South Florida has a tough slate of games to close out the season, starting this week against Navy. The Bulls play four teams that are either currently ranked in the Associated Press Top 25 or getting votes: No. 21 Cincinnati, Temple (31 votes) Memphis (six votes) and Central Florida (three votes).