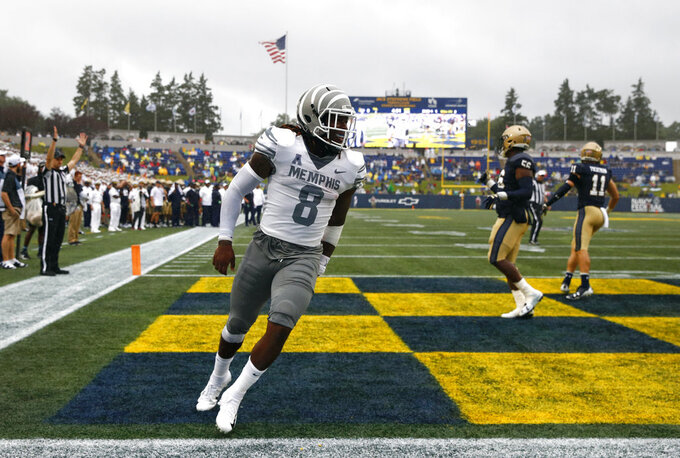 Memphis running back Darrell Henderson (8) celebrates after scoring a touchdown in the first half of an NCAA college football game against Navy, Saturday, Sept. 8, 2018, in Annapolis, Md. (AP Photo/Patrick Semansky)

ANNAPOLIS, Md. (AP) — Backup quarterback Zach Abey ran for a 3-yard touchdown in a driving rain with 2:37 left, capping a fourth-quarter comeback that lifted Navy past error-prone Memphis 22-21 on Saturday.

After a Memphis punt, the Midshipmen (1-1, 1-0 American Athletic Conference) moved 56 yards in 13 plays in a drive that Abey ended standing up in the end zone.

A steady rain turned a projected shootout turned into a conservative game of ball control. After scoring 66 points in its season opener against Mercer, Memphis struggled offensively until Darrell Henderson peeled off touchdown runs of 78 and 59 yards in the third quarter.

Henderson finished with 212 yards and three TDs on just 13 carries.

But Memphis just couldn't overcome the rain, four turnovers and a sub-par performance by White, who went 15 for 25 for 145 yards and an interception.

It was an uplifting victory for the Midshipmen, who were coming off a 59-41 blowout loss at Hawaii.

The Tigers trailed 9-7 at halftime after losing possession of the wet football three times and punting twice.

John Williams fumbled on the Tigers' first play and Sean Dykes coughed up the ball later in the first quarter. Between the turnovers, Navy kicked a field goal.

White finally got the Memphis offense on track with an 86-yard drive that ended with a 2-yard touchdown run by Henderson.

Perry answered with a 7-yard score with 7 seconds left.

Memphis: It's hard to get a read on Memphis, which led 56-0 at halftime last week and rolled up 752 yards. Not to confuse Navy with Mercer, but the Tigers looked awful on offense with the exception of Henderson's two long runs.

Navy: The offense remains one-dimensional, which is to be expected, but the defense came up big when it counted. And, the winner of the Navy-Memphis game has earned at least a share of the West Division title in each of the last three years.

Navy's defense had to return from its locker room to finish the first half after a replay determined there was one second remaining with Memphis in possession at midfield. The payoff for the Midshipmen was an interception as time expired.

Navy safety Sean Williams forced both Memphis fumbles in the first quarter. The last time a Midshipman caused two fumbles in a game was against Air Force in 2015.

Memphis: Hosts Georgia State on Friday night in the first meeting between the teams.

Navy: Hosts Lehigh on Saturday in a series that began in 1889 but has been dormant since 1987.