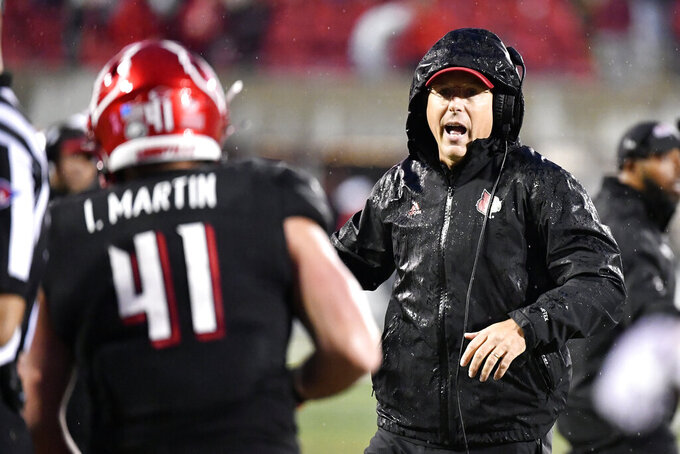 Louisville head coach Scott Satterfield shouts at one of his players during the second half of an NCAA college football game against Boston College in Louisville, Ky., Saturday, Oct. 23, 2021. Louisville won 28-14. (AP Photo/Timothy D. Easley)

North Carolina State regrouped quickly from its first loss. The Wolfpack must do it again Saturday night against Louisville, even as injuries could make that job tougher this time around.

N.C. State (5-2, 2-1 Atlantic Coast Conference) is coming off a 31-30 loss at Miami in a mistake-prone performance that knocked Dave Doeren’s team out of the AP Top 25 after a four-week stay in the rankings. It also saw the Wolfpack lose a fourth defensive starter to a season-ending injury.

Yet the loss doesn’t change the fact that N.C. State controls its own destiny in the Atlantic Division race to reach the ACC championship game, a fact Doeren brought up then reiterated twice more to start the week.

“I know a lot of fans were disappointed, upset, whatever you may say about the loss we just had,” Doeren said. “And so were we, more than you. But we still have it all in front of us.”

The good news for Doeren is N.C. State followed its first loss at Mississippi State with four straight wins, including a double-overtime win against six-time reigning ACC champion Clemson.

Louisville (4-3, 2-2) is coming off a division win against Boston College and must win Saturday to stay in the hunt in the Atlantic race headlined by No. 13 Wake Forest (7-0, 4-0). The Cardinals follow this game by facing Clemson as part of a critical three-game stretch.

“We told our team, kind of where we’re sitting in within the ACC standings, there’s still a great opportunity in ACC,” coach Scott Satterfield said. “We take care of business Saturday, then we’re sitting in second place on our side.”

Some other things to know about Saturday’s Louisville-N.C. State game:

Louisville quarterback Malik Cunningham ranks 15th in the Bowl Subdivision ranks in total offense (309 yards per game). He’s coming off a huge performance against BC on the ground (133 yards, three TDs), which had followed two strong passing games (579 yards, three TDs, no interceptions) in the previous two games.

The Cardinals rushed for a season-best 331 yards against Boston College, their highest total since Nov. 23, 2019 against Syracuse. That total included a career-high 112 yards on 13 carries by freshman Trevion Cooley, but the highlight was Cunningham’s perfect option toss to Jalen Mitchell for 33 yards to set up Mitchell’s 5-yard TD run two plays later.

The little-used play spokes volumes about Louisville’s O-line play behind the league’s No. 4 rushing attack (201.0).

That added him to a list that includes all-ACC linebacker Payton Wilson, nose tackle C.J. Clark and safety Cyrus Fagan, another hit to a unit ranked 10th in FBS in scoring defense (16.7) and 11th against the run (93.1).

“It does hurt the team quite a bit just knowing the impact those guys have on the field for us,” safety Devan Boykin said. “But unfortunately we can’t get those guys back so it’s next man up and we’ve got to get it done.”

Louisville’s four turnovers against Boston College snatched some of the luster from last week’s win. The Cardinals are even this season in turnover margin.

“We obviously don’t want to turn the football over,” Satterfield said. “This will be a huge game for us to be able to take care of the football.”

N.C. State is in the midst of playing four out of five on the road. Saturday night’s visit from Louisville marks the Wolfpack’s only home game in a 47-day span before visiting Florida State next week and Wake Forest on Nov. 13.

AP Sports Writer Gary B. Graves in Louisville, Kentucky, contributed to this report.