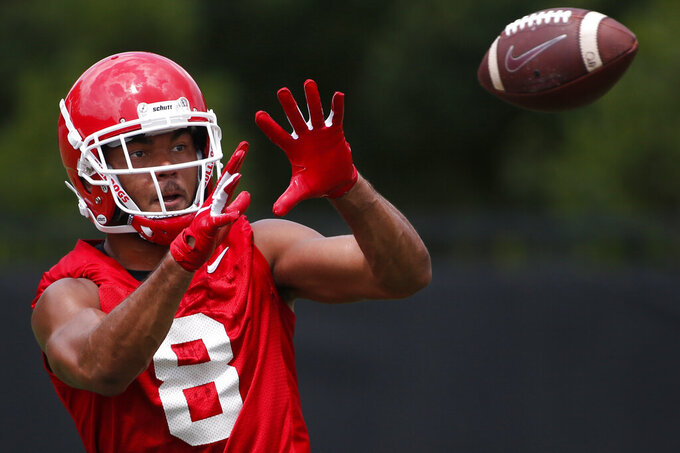 FILE - Georgia wide receiver Dominick Blaylock (8) looks to make a catch during an NCAA football preseason practice in Athens, Ga., in this Friday, Aug. 2, 2019, file photo. The NCAA football oversight committee is preparing to recommend changes to preseason camp that will include fewer fully padded practices and the elimination of some old-school collision drills. The football oversight committee 's initial proposal called for at least nine of a team's 25 preseason practices to be run with players wearing helmets but no other pads, and no more than eight fully-padded, full-contact practices. (Joshua L. Jones/Athens Banner-Herald via AP, File)/

The NCAA football oversight committee is preparing to recommend changes to preseason camp that will include fewer fully padded practices and the elimination of some old-school collision drills.

The latest move to scale back contact in practice comes in response to a five-year study involving six major college football teams that found more head impact exposure and concussions happened in preseason practice than during games.

The committee's initial proposal called for at least nine of a team's 25 preseason practices to be run with players wearing helmets but no other pads, and no more than eight fully-padded, full-contact practices. That proposal went out to NCAA membership for feedback two weeks ago.

The committee is scheduled to meet again Thursday. West Virginia athletic director Shane Lyons, the chairman of the committee, said the plan is to hand over a final recommendation for a new preseason model for the Division I Council to consider at its May 19 meeting.

If passed, the new model would go into effect this year.

“We're trying to provide as much flexibility within the model as possible and not dictate what days they get to do what, and give each coach the ability to coach how they want to,” Lyons said. “But then also limit the number of contacts that we currently have from a direct hit, head-to-head contacts that you currently have in practices.”

During live-tackling practices, no more than 90 minutes of full contact will be permitted under the initial proposal.

The study found that 48.5% of the concussions recorded occurred during August training camp. The teams involved in the study were Virginia Tech, North Carolina, Wisconsin, UCLA, Air Force and Army.

Todd Berry, executive director of the American Football Coaches' Association, said there was some concern among coaches that Army and Air Force awould skew the study data. The two academies play a run-heavy, triple-option offense that can lend itself to more contact, he said.

Overall, though, Berry said the study is helping guide changes many coaches were already moving toward.

“We wanted things based on data rather than assumptions,” Berry said.

NCAA rules currently mandate at least two of 25 preseason practices be contactless and conducted without pads, Berry said, but a survey found most coaches already run about six of those leading up to the season.

He said going to nine padless practices, essentially walk-throughs, seems like a drastic change to coaches.

“To us that's kind of a giant leap," Berry said. "We'd rather take a step and then measure the results and say, ‘OK, we ended up in a good place.’ And take another step and keep improving along those lines.”

Coaches have been moving away from high-impact drills such as Bull in the Ring and the Oklahoma drill, where players mostly just run into each other.

“Most of our coaches aren’t doing it so I don’t know if it’s going to move the needle much,” Berry said. “But I get it.”

Berry said scaling back too much on hitting in practice could lead to players not being properly prepared to protect themselves in games.

“We’re fearful if we go too far in one direction we'd have a lot of injuries in that first game,” Berry said. “There is a process, a teaching progression to get players to learn how to control their bodies.”

The final proposal could look different than the 9-8-8 model, but changes are likely to be small tweaks, Lyons said.

"I think the balance is there," Lyons said. “Do I think there's enough there to teach and work through it? I think the answer is yes.”