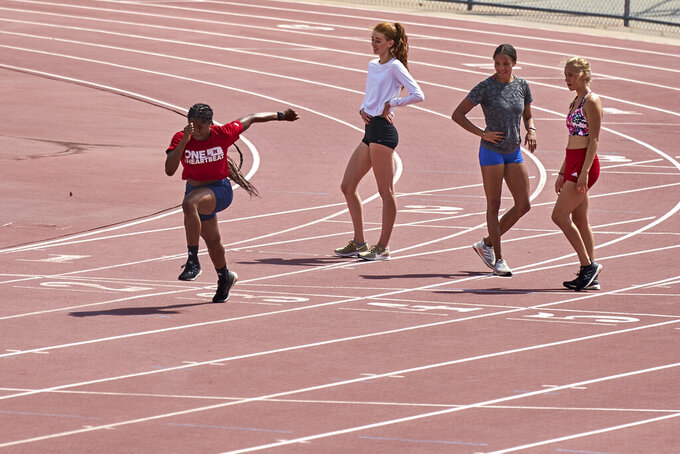 University of Nebraska athletes train in Lincoln, Neb., Wednesday, Aug. 12, 2020. The Big Ten won't play sports this fall because of concerns about COVID-19, becoming the first of college sports' power conferences to yield to the pandemic. The move announced Tuesday. (AP Photo/Nati Harnik)

The NCAA called off fall championship events — a move Thursday that does not affect major college football — because not enough schools will be competing in sports such as men's and women's soccer and women's volleyball during the first semester.

NCAA President Mark Emmert made the announcement in a video posted on Twitter, but it has been clear this was coming as conferences canceled fall sports seasons because of the coronvirus pandemic.

“That doesn't mean we shouldn't and can't turn toward winter and spring and say, ‘How can we create a legitimate championship for those students?’" Emmert said. "There are ways to do this. I am completely confident we can figure this out. If schools and conferences want to move forward ... let's do it.”

Emmert also said NCAA officials have begun work on contingencies for the NCAA basketball tournaments, possibly moving dates and looking into creating bubbles in which the teams can compete.

He said the NCAA would prioritize staging championships in winter and spring sports because those — including the lucrative men's basketball tournament — were canceled when COVID-19 first spiked across the United States in March.

Moving fall sports to the spring still must go through the Division I Council, which is comprised of representatives of all 32 conferences, and be approved by the DI Board of Directors.

Championship events in all sports could be modified going forward to deal with COVID-19, Emmert said. That is likely to include fewer teams participating at fewer and predetermined sites.

The spring calendar already features more sports than the fall so cramming still more in, including FCS football, will create logistical challenges.

“Will it be normal? Of course not. We'll be playing falls sports in the spring,” he said. "Will it create other conflicts and challenges? Of course. But is it doable? Yeah.”

Last week the NCAA Board of Governors said championship events in a sport would canceled if fewer than 50% of the teams competing in that sports played a regular season.

Divisions II and III almost immediately followed by canceling their fall championships. Division I — which is comprised of 357 schools — held on, but as conference after conference canceled their fall seasons the tipping point came.

Falls sports also include field hockey, cross country and water polo. Schools in conferences that have not yet canceled their fall seasons could conceivably try to stage regular-season competition over the next few months.

The highest tier of Division I football, the Bowl Subdivision, is not impacted. The College Football Playoff is run by the conferences and six of those leagues are still moving toward having a season, including the Southeastern Conference, Atlantic Coast Conference and Big 12.

Beyond those six conferences, the rest of Division I has mostly been shuttered. Whether they can pull off football or any other sport during the pandemic is still to be determined.

Earlier in the day, the NCAA’s chief medical officer and two of its infectious disease expert advisers warned the uncontrolled spread of COVID-19 throughout the United States remains an enormous obstacle for college sports to overcome.

“I feel like the Titanic. We have hit the iceberg, and we’re trying to make decisions of what time should we have the band play,” said Dr. Carlos Del Rio, executive associate dean at Emory University.

Del Rio, a member of the NCAA’s COVID-19 advisory panel, appeared with NCAA chief medical officer Dr. Brian Hainline on a webinar hosted by the Infectious Diseases Society of America.

“We need to focus on what’s important,” Del Rio said. “What’s important right now is we need to control this virus. Not having fall sports this year, in controlling this virus, would be to me the No. 1 priority.”

The United States has had more than 5 million COVID-19 cases.

Earlier this week, the Big Ten and Pac-12 became the first Power Five conferences to decide not to play football, or any sports, this fall. Emmert called it a devastating blow.

College sports administrators and coaches have been making the case schools are providing structured environments with frequent testing and strict protocols that make athletes safer than the general population.

Hainline said about 1%-2% of college athletes who have been tested by schools have been positive for COVID-19.

“Some conferences will say, we’ll go forward. It’s a very narrow path, hopefully they’ll be no infections and if there are infections we’ll be able to detect them, and we we’ll be able to stop them and we won’t have an outbreak,” Del Rio said. “But other conferences say, no. Our tolerance is for zero risk and therefore we will not have it. It’s exactly the same data just being looked at in different ways.”

By Steve Megargee just now
By Ralph D. Russo 8 minutes ago
By Eric Olson an hour ago
13 hrs ago
By Bob Ferrante 13 hrs ago