NCAA moves toward immediate eligibility for all transfers 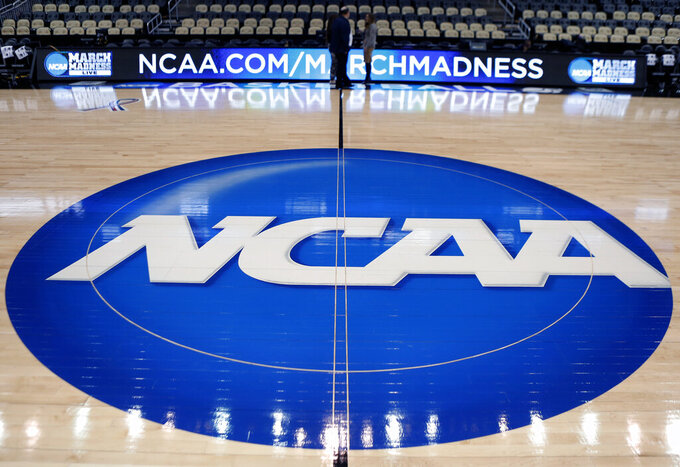 FILE - In this March 18, 2015, file photo, the NCAA logo is displayed at center court as work continues at The Consol Energy Center in Pittsburgh, for the NCAA college basketball tournament. The NCAA took a significant step toward allowing all Division I athletes to transfer one time without sitting out a season of competition. A plan to change the waiver process is expected to be presented to the Division I Council in April, 2020. If adopted, new criteria would go into effect for the 2020-21 academic year and be a boon for athletes in high-profile sports such as football and men's and women's basketball. (AP Photo/Keith Srakocic, File)

The NCAA took a significant step toward allowing all Division I athletes to transfer one time without sitting out a season of competition.

A plan to change the waiver process is expected to be presented to the Division I Council in April. If adopted, new criteria would go into effect for the 2020-21 academic year and be a boon for athletes in high-profile sports such as football and men's and women's basketball.

In those sports, along with baseball and men's hockey, Division I undergraduate athletes are required to do what the NCAA calls a year-in-residence after transferring, when they can practice with their new teams but not participate in games.

Other NCAA Division I athletes are permitted by rule a one-time exception to be immediately eligible for competition after transferring.

The NCAA's announcement Tuesday comes a day after the Atlantic Coast Conference became the second Power Five conference to publicly support the one-time exception for all transferring athletes. Last month CBS Sports reported that Big Ten athletic directors backed a legislative proposal that would allow all athletes to transfer one time and be immediately eligible to play.

The NCAA's Division I transfer waiver working group said it will seek feedback from athletes, administrators and coaches over the next two months. The group can expect push back from coaches.

Todd Berry, executive director of the American Football Coaches Association, said he was “shocked” by the NCAA's announcement and fears the change will spark a free-agent frenzy that led to restrictions being placed on transfers decades ago.

“It leads to opportunities for recruiting off other campuses,” Berry said. “If you’re at another program why would you take a high school player? Why not go get one that's already proven in college?”

The working group's concept would change the waiver process, but not NCAA bylaws.

The Division I Board of Directors placed a moratorium on transfer legislation last fall and directed the Council to appoint a working group to examine the transfer waiver process.

The NCAA adjusted waiver criteria two years ago to give more athletes the chance to become immediately eligible, but that has led to complaints about inconsistency in the process.

“The current system is unsustainable. Working group members believe it’s time to bring our transfer rules more in line with today’s college landscape,” said Mid-American Conference Commissioner Jon Steinbrecher, who is the chairman of the transfer working group. "This concept provides a uniform approach that is understandable, predictable and objective. Most importantly, it benefits students.”

If the transfer working group's concept is adopted, any athlete would be granted immediate eligibility after a transfer if four criteria are met:

— Receive a transfer release from the previous school.

— Leave under no disciplinary suspension.

“More than a third of all college students transfer at least once, and the Division I rule prohibiting immediate competition for students who play five sports hasn’t discouraged them from transferring,” Steinbrecher said. “This dynamic has strained the waiver process, which was designed to handle extenuating and extraordinary circumstances.”

Athletes can currently request a waiver for immediate eligibility for several reasons. The most common are: Claims of athletes being run off a team by a coach; claims of egregious behavior by the original school; injured or ill immediate family member; and injury or illness to the athlete.

While several high-profile football players such as Ohio State quarterback Justin Fields and Michigan quarterback Shea Patterson have had waivers granted by the NCAA, plenty of athletes have their requests denied. What has risen is the expectation of immediate eligibility.

“We know that challenges will exist with this concept, particularly as it relates to other coaches potentially tampering with currently enrolled student-athletes,” Steinbrecher said in a statement. “The working group will continue to examine this, as well as any potential financial aid and academic impacts, so the Council can make a fully informed decision.”

Berry said coaches are mostly supportive of the movement toward providing more benefits to athletes in recent years. The latest part of that movement is the ongoing attempt by the NCAA to find a way to allow college athletes to be compensated for their names, images and likeness. That issue is likely to be settled with the help of federal lawmakers.

“It might pass, but I’m afraid of what the outcome will be,” Berry said. “This is not a hypothetical. The rule was in there for a reason. If they go through with this I'm not sure everybody will like the outcome.”