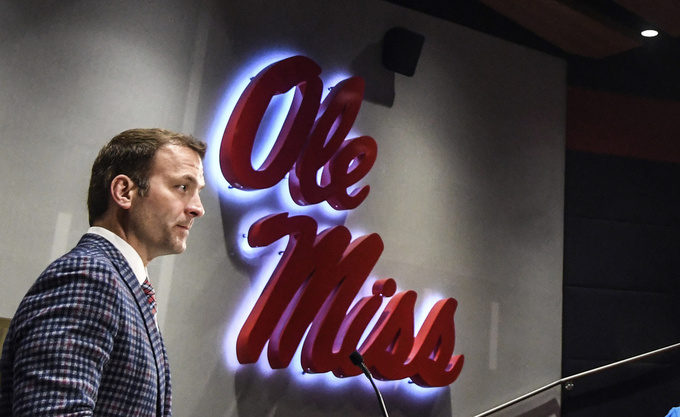 FILE - In this Dec. 1, 2017, file photo, University of Mississippi athletic director Ross Bjork discusses NCAA sanctions leveled against the football program during a press conference at the Manning Center in Oxford, Miss. The university won part of its appeal of NCAA sanctions against the football program Thursday, Nov. 1, 2018, with a committee overturning the penalty restricting the school from hosting unofficial recruiting visits. (Bruce Newman/The Oxford Eagle via AP, File)

OXFORD, Miss. (AP) — Mississippi won part of its appeal of NCAA sanctions against the football program, with a committee overturning the penalty restricting the school from hosting unofficial recruiting visits.

This season's bowl ban and other penalties still stand. Some of the penalties for recruiting rules violations against the program were self-imposed by the school.

The university announced Thursday the NCAA Infractions Appeals Committee's decision . The appeals group said the infractions committee abused its discretion when prescribing the penalty, restricting unofficial visits. The appeals committee said the penalty was "based in significant part on one or more irrelevant or improper factors."

In a letter signed by university chancellor Jeffrey Vitter and athletic director Ross Bjork, Ole Miss said that even with changes by made to the NCAA enforcement model, "inequities will persist."

"All of this suggests that additional NCAA reforms are needed, and we will be a leader in that effort," the letter said.

The ruling closes a six-year case against Ole Miss in which the NCAA found an "unconstrained culture of booster involvement in football recruiting," mostly under former coach Hugh Freeze, who was fired for inappropriate behavior not related to the NCAA investigation before the infractions committee's 2017 ruling. The NCAA hit Freeze a one-year show-cause order, effectively preventing him from getting another college coaching job.

"This ordeal is now over," the letter read. "Our attention must now be on the present and the future of our football program, and we are calling on the Ole Miss family to help finish this season strong. With the freedom to recruit and promote all that the University of Mississippi has to offer, Coach Luke and his staff will keep building on the momentum we have in our program.