NCAA's Election Day off sends message but is it needed? 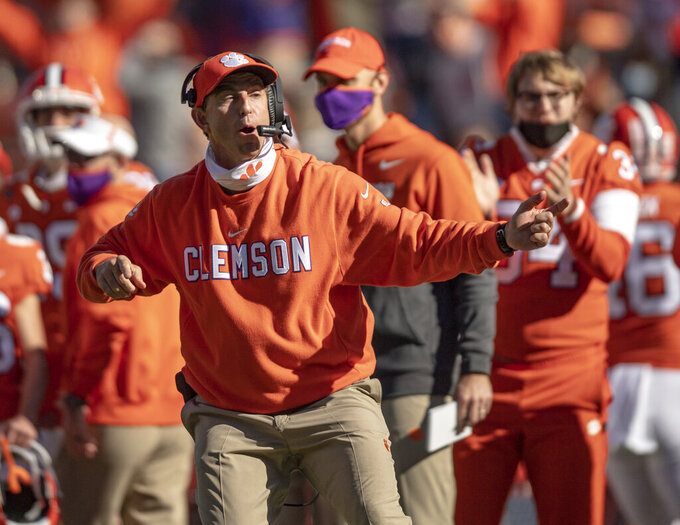 A summer of activism, sparked by protests of racial injustice, led to a grassroots movement to give college athletes the day off from sports on Election Day.

The NCAA latched on to the idea and, under a mandate approved in September, organized athletics will go dark on college campuses across the country. It has not gone over without a hitch: Tuesdays are typically when that week's game plan is first put into action, and there has been grumbling from a few football coaches.

Clemson safety Nolan Turner, who is from the suburbs of Birmingham, Alabama, said Monday he had already voted by absentee ballot.

“We're going to have our typical Tuesday practice today, and then (Tuesday) will kind of be a midweek day, get refreshed, get the body feeling good and really get dialed in on our game plan and what we've got to do against Notre Dame," Turner said of the top-ranked Tigers' trip to Indiana this weekend.

That's the point Turner's coach, Dabo Swinney, was making last month when he said he “didn't understand” the NCAA decision. Many players will have already voted and those that haven't probably wouldn't need all day to do so.

Notre Dame coach Brian Kelly said having Tuesday off meant rushing players back on Sunday for weight training, physical rehab and meetings after returning from a road game at Georgia Tech last Saturday night. No. 4 Notre Dame also worked in an additional COVID-19 test for players because of the change in schedule.

Florida coach Dan Mullen said he supports making Election Day a federal holiday and giving everyone a day off from work and school. But last week he called the NCAA's Election Day decision “disappointing.”

Florida has held a team voter registration day, Mullen said, and he wanted to get the team together to vote as a group Tuesday.

“We’re not allowed to do the organized team activities that day now,” Mullen said.

At the height of the protests that came after the police killings of George Floyd in Minneapolis and Breona Taylor in Louisville, it was common for college football players and their coaches to not just take part in campus marches and demonstrations but to lead them.

At Clemson, in particular, star quarterback Trevor Lawrence and his teammates organized an event.

Georgia Tech assistant basketball coach Eric Reveno has been credited with planting the idea of making Election Day an off day for college athletes back in the summer and moving it forward on social media with #AllVoteNoPlay.

Georgia Tech football coach Geoff Collins backed Reveno's idea. Before the NCAA made it official on Sept. 16, individual schools such as UCLA and Minnesota said they would give athletes Nov. 3 off. Texas coach Tom Herman said he planned to do give his team the day off and provide transportation to the polls for those who needed it.

Duke coach David Cutcliffe said the school and athletic department have put a lot of effort into empowering athletes, encouraging them to vote and educating them on how to go about it.

“We’ve worked very hard with our team so that anybody that wasn’t registered is now registered, and we’ve had our people administratively help them get their ballots, make sure they’re voting and have voted,” Cutcliffe said.

As for a day off, Cutcliffe said: “I think it’s a little more showy, honestly -- I’ll just say it like it is -- than it has purpose.”

Perhaps no team had to condense its preparation this week more than No. 9 BYU. The Cougars play their toughest game of the season Friday night at No. 21 Boise State.

BYU, which is affiliated with the Church of Latter Day Saints, does not permit athletic activities on Sundays. Because of that, the school asked the NCAA for a waiver to permit the Cougars to practice Tuesday. It was denied.

“Everybody had good intentions,” BYU athletic director Tom Holmoe said. “I don’t think there’s anybody that’s going to argue with the fact that we can do more as administrators in college athletics, and thus the legislation.”

But, he added, “I think most of the work has been done."

David Ridpath, a professor of sports business at Ohio University and member of the Drake Group watchdog group for college sports, said it probably wasn't necessary to give the athletes a full day off.

Having it does send a message.

“I certainly don't want to say it was a bad idea by any stretch and it probably was more public relations than anything,” Ridpath said. “I like the fact that we're trying to get college students and athletes more politically engaged. I do think the symbolism is important.”